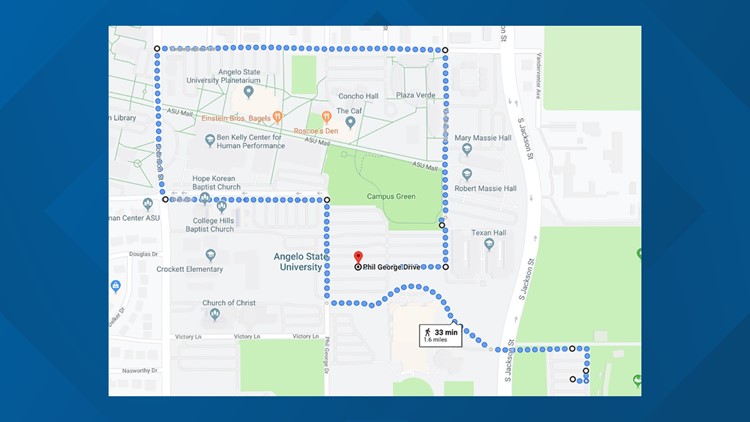 SAN ANGELO, Texas — For the first time since 2008, Angelo State University is hosting its annual homecoming parade on campus, rather than in downtown San Angelo. The 2019 Homecoming Parade will take place at 10 a.m. Saturday, Oct. 12.

The event is free and open to the public.

The parade route will start in the Foster Field parking lot at 1st Community Credit Union Stadium on Jackson Street, head west in front of the Junell Center to Phil George Drive, and then take the following route:

Community groups and organizations are also invited to participate – and can sign up at angelo.edu/parade. Deadline for registration is Sept. 27.

This year’s homecoming theme is “ASU in Space,” and groups are encouraged to decorate their parade entries according to the theme, and to show their ASU blue and gold pride.

A press release from ASU stated, "Hosting the homecoming parade on campus is a return to previous tradition and will make it easier for more students and alumni to participate in the festivities. Also, similar to moving ASU Rams football games to campus in 2014, having the parade on campus will be a tremendous boost to school spirit and pride in the Ram Family."