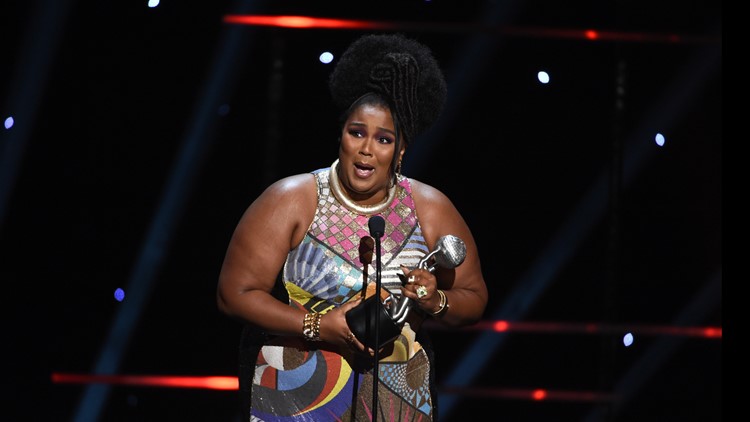 Photo by: Chris Pizzello/Invision/AP
Lizzo wins the award for entertainer of the year at the 51st NAACP Image Awards at the Pasadena Civic Auditorium on Saturday, Feb. 22, 2020, in Pasadena, Calif. (AP Photo/Chris Pizzello)

Plus, J.K. Rowling has created a magical portal for Harry Potters lovers of all ages to enjoy while at home and Sophie Turner hilariously trolled her husband, Joe Jonas, on Late Night with Conan O’Brien on Tuesday night.

Digital anchor Stephanie Haney breaks it all down for you each weekday, in your Pop Break on What’s New.

Three-time Grammy winner Lizzo sent a personal thank you to workers at the Sugarcreek Health Center in Dayton for being on the front lines of the COVID-19 pandemic, promising to support them in any way that she can.

“Anyhing you all need just holler at your girl,” she said. “Sending you love and sending big big hugs and thank you so much.”

Lizzo send shout to local doctors, nurse and other medical staff in fighting

Lizzo gave a shout out to the medical staff at Sugarcreek Health Center over the weekend! ❤️👏 STORY: https://bit.ly/2R2caJY

Lizzo specifically recorded that clip because Virginia Mack, the mother of one of her best friends, is an ultrasound technician at Sugarcreek Health Center.

She also bought them lunch, which she’s doing for lots of places around the country.

For all of the Parrot Heads out there, Buffet's “Cabin Fever Tour" launches today on Sirius XM, which is free in North America through May 15.

Listeners can hear Buffett and his Coral Reefer Band every Wednesday and Saturday night at 8 p.m. Eastern, including rare performances from Buffett's personal archives.

The tour will also be co-broadcast on Margaritaville TV.

For Harry Potter fans, ]Rowling's “Harry Potter at Home” site is life, and it’s full of magical treats to fill your day.

By the way, Daniel Radcliffe, who played the namesake character, knows all about self-isolation since Harry Potter lived in a cupboard for 11 years.

Radcliffe was on The Late Show with Stephen Colbert on Tuesday night, and shared how playing the role was the perfect preparation for living in self-quarantine in New York City.

”I think that's really the message of the books that I remember, is isolate yourselves and wash your hands,” Radcliffe said.

And while many of us are having a hard time staying home, Game of Thrones star Sophie told Conan she's loving it because she's a homebody. As for her Jonas Brother, Joe…not so much.

Sophie considers herself to be an introvert, and she calls Joe a social butterfly. “It’s like prison for him but great for me,” she said.

Sophie also admitted she was wearing sweatpants for the interview, while Joe is still putting on jeans everyday.

“If you're wearing denim pants at home, what does that say about you?” she asked, bringing up a meme that questions that kind of life choice. “Like, are you a psychopath?” she added.

The answer is yes, Sophie.

RELATED: Deepak Chopra and Oprah Winfrey team up for free meditation, Colton Underwood's book is out and Savannah Guthrie is back in studio for the TODAY Show