Doug Henning was connected with his biological father earlier this year through Ancestry.com; after testing negative for COVID-19, they spent Thanksgiving together. 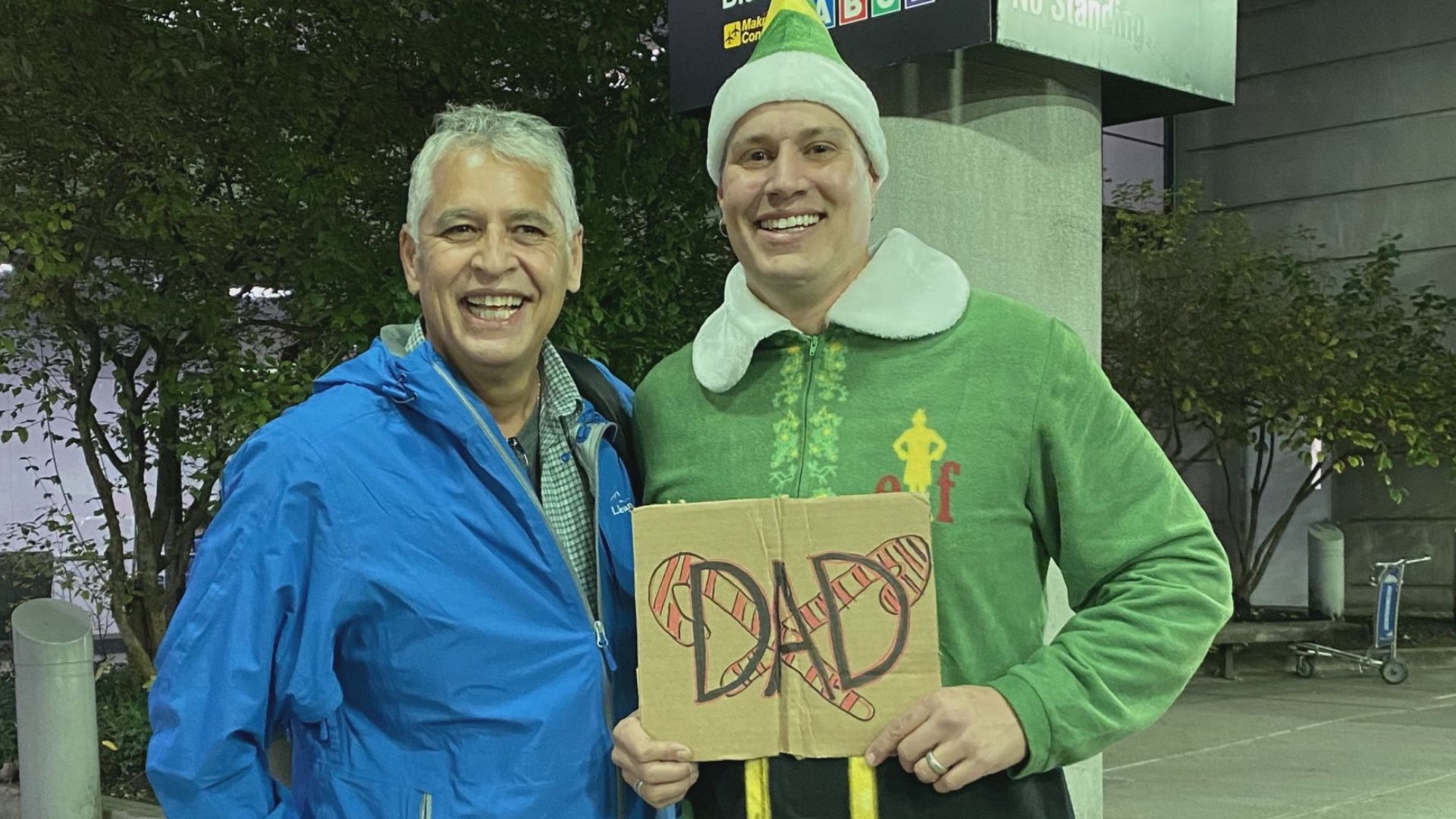 ELIOT, Maine — A man from Maine decided to recreate the famous scene from "Elf" when meeting his biological father for the first time last week.

Doug Henning, an Eliot resident, dressed for the part and even sang the song as he picked up his dad from Boston Logan International Airport. He says he couldn't resist.

"It's pretty much the same, that's what was so hilarious about it," Henning said. "It's like you never knew I was born and I'm here now!"

Henning was adopted as a child, and only recently did he start digging into his past. As his daughters have grown, he says he's been more and more drawn to his heritage and learning more about his true roots.

He signed up for Ancestry.com and sent his DNA to the company three years ago.

It wasn't until this year that a long lost cousin reached out to him. Henning says he almost didn't see the message in his email.

"I ended up going to my junk mail and realized I had a message from Ancestry saying you had a match," Henning said. "She wrote me an email saying I think you're my cousin and my cousin is your sister… so of course my wife and I responded immediately."

He soon learned his father, Raul, had no idea he even existed.

"He was floored," Henning said.

Nooo, that's not Buddy the Elf, that's Doug Henning. He re-created the famous scene while picking up and meeting *his biological father at the airport last week. The two spent their first Thanksgiving together at Doug's home in Maine. More tonight @ 6! pic.twitter.com/iQ7EzRyp2M

The two were forced to stay connected virtually due to the pandemic. However, after testing negative for COVID-19, Raul took a flight from Miami to Boston last week, giving Henning the chance to spend his first Thanksgiving with his biological father.

"I think it was probably more emotional for him than it was for me," Henning said. "I always say it's because I already knew I was adopted my whole life so, I knew there was somebody out there that I belonged to… but him, not knowing and thinking about all the years that he missed."

Henning said he was shocked to learn he and his dad work in the same industry. While he operates a camera for a living, his father manages an audio board for his.

"That was too ironic," Henning said.

Raul has since flown back to Miami, but Henning says the memories that were made will stick around forever. Especially those he made with his new granddaughters.

"He not only has a son... he has two grand-daughters now… which is awesome," Henning said. "He's the first grandparent out of all of his siblings... he's so stoked about that."

Henning says the two are already working out the plans for another trip, however, it will most likely happen after the pandemic loses some steam.