'Your bravery and sacrifice will always be appreciated,' the card read. 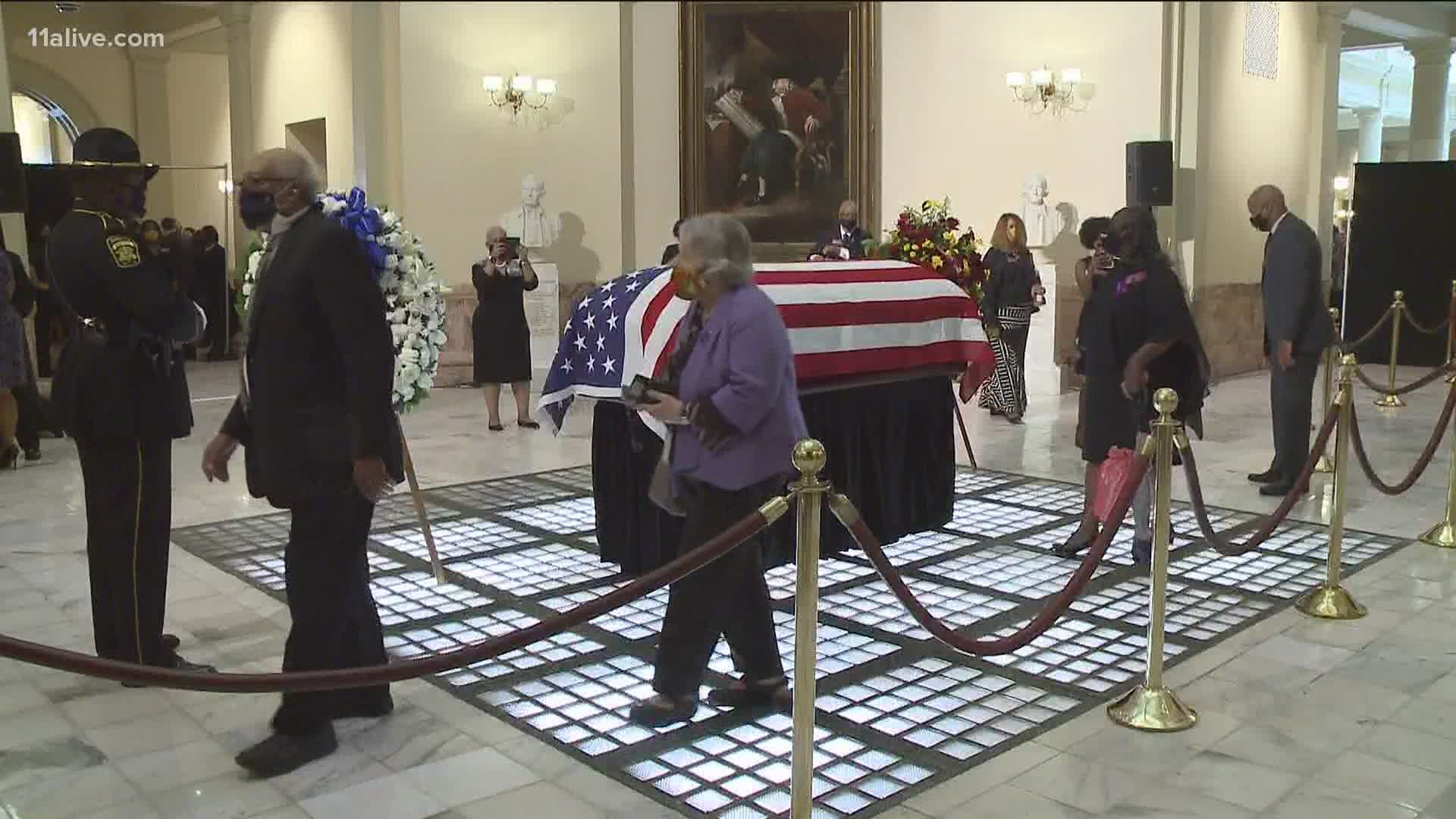 ATLANTA — As the body of Congressman John Lewis made its way to the grounds of the state capital, outside, Atlantans were sharing their sympathies and words of thanks.

Wednesday afternoon, people gathered near Washington and Mitchell streets to use markers to scrawl their tributes inside and outside a giant sympathy card for Lewis.

Some simply wrote down their names, as a physical reminder that they were present for a monumental moment in history.

The idea for the card came from Bruce Griggs. He told 11Alive he's been following the Congressman's six-day journey before Lewis' interment - from Troy and Selma, Alabama to Washington, D.C. to Atlanta.

He said it was his way of "showing [Lewis] some love," by way of the "world's largest sympathy card."

"With a person with a heart like his, we need a card as big as that," Griggs said.

Credit: AP Photo/Brynn Anderson
A mourner shows a card as he waits for the casket of Rep. John Lewis to arrive at the state capital as Lewis will lie in repose, Wednesday, July 29, 2020, in Atlanta. Lewis, who carried the struggle against racial discrimination from Southern battlegrounds of the 1960s to the halls of Congress, died Friday, July 17, 2020.

The card, which bore the words "Your bravery and sacrifice will always be appreciated," was a way to honor the "good trouble" Lewis encouraged activists to engage in, Griggs said. It attracted a crowd who wanted to honor the civil right's legend - who meant a lot to scores of people, and to Griggs personally.

"Congressman Lewis meant a lot to me," Griggs said.

"Nobody has touched the lives of the kids and my community like Congressman Lewis," he added.

Griggs described how he first met Rep. Lewis 25 years ago after being introduced by his godfather. Since then, Griggs explained how, from that time on, the Congressman started to invite the kids in Griggs' youth mentoring group to his office in Washington, D.C. every summer.

Griggs said this is just his small way of showing Lewis the impact he made.

"Congressman Lewis had a saying: 'The more you know the more you owe' - I owe this to him," Griggs explained.

"I would not be where I am as a non profit agency and an individual without Congressman Lewis being a part of what I call my mentoring pool," Griggs added.

A humble tribute to a humble man whose legacy looms giant as "forever our hero."

1 / 17
Stephen BoissyWXIA
Memorials line the ground below Atlanta's most prominent tribute to Rep. John Lewis - a massive mural on the side of a midrise building.