Organizers announced the festival was canceled on Wednesday morning. 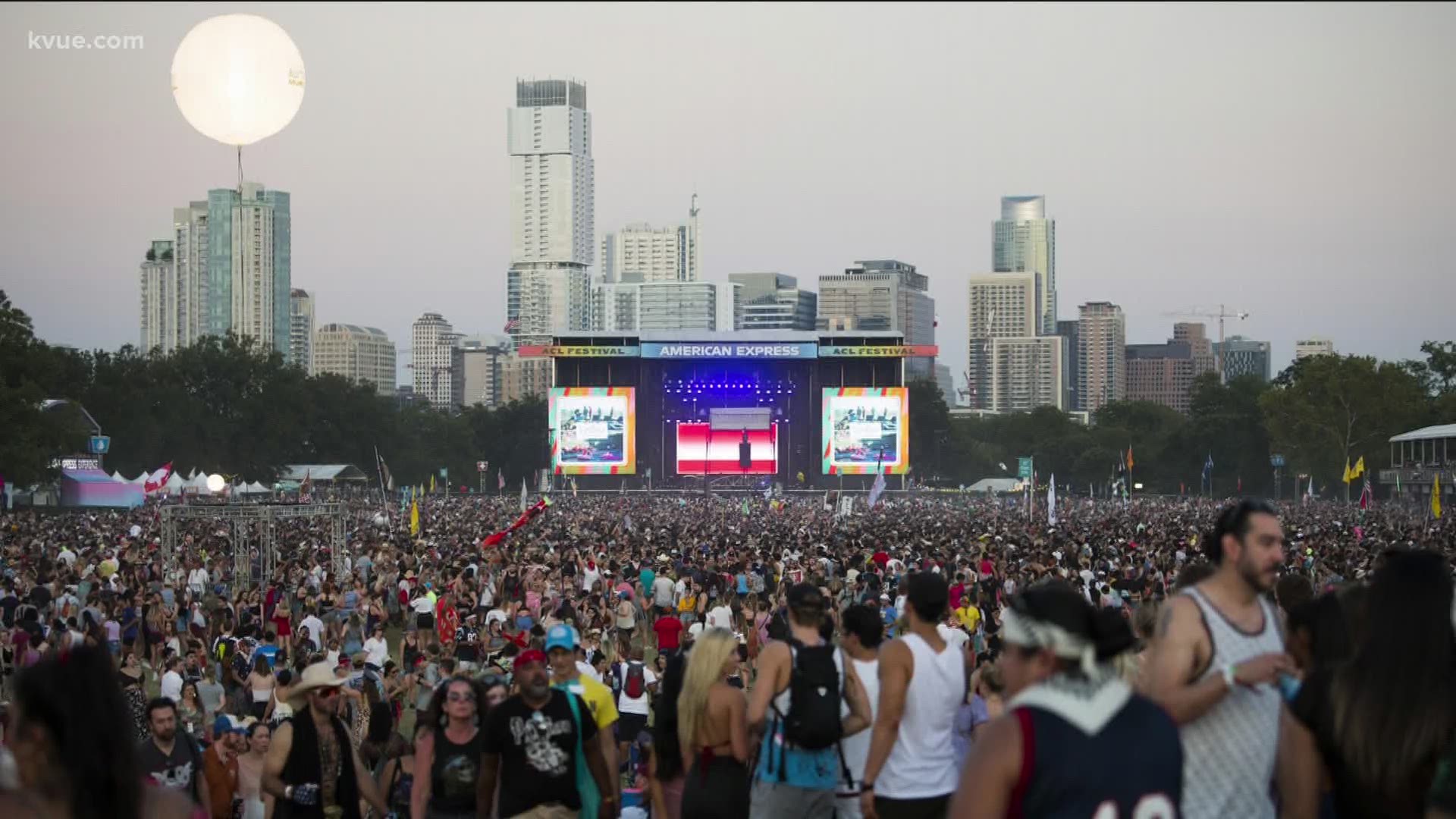 AUSTIN, Texas — In 2018, the famous Austin City Limits Music Festival brought in $264 million to the local economy. Much of that money potentially came through travel and tourists filling bars, restaurants and other local businesses.

But the coronavirus pandemic has officially put ACL on the list of big Austin events canceled for 2020.

To many, this was expected. But while some business owners understand why the festival had to be canceled, it means another weekend of the city missing out on its normal revenue.

The usual benefit for Austin's parks and trails

It's not just businesses who get a big boost during the music festival – the beloved parks and trails in Austin also see some benefit.

The Austin Parks Foundation has partnered with the music festival since 2005. So far, $41 million has been generated through the festival for Austin's parks, trails and green spaces for things like upkeep of the parks, grant programs, development and much more.

"Overall, we understand where our partners are coming from – this was an extremely hard decision," said Allison Watkins, the chief strategy officer for the Austin Parks Foundation. "We’re in full support of the decision we’ve made ... It’s a hard one but again, it’s what will keep our city and the community of Austin safe.”

Watkins said the foundation is not worried about the loss in money for this year, and she has optimism for the future.

"We intend to do all of the great work we have done in the past, just with a little less funding in the coming year," Watkins said. "The parks are seeing more use than they ever have before and so we want to continue to support the parks and recreation department, support all of the improvements and maintenance that are needed so people can continue to use those spaces."

How local businesses are reacting

If you take a step inside Austin Rocks, you won't get far without seeing a big bottle of hand sanitizer for all customers.

The colorful store on Second Street in Downtown Austin quickly adapted to the "new normal" of running a retail store in the midst of the pandemic, doing things like asking all employees and customers to wear face coverings.

According to the owner, Shelley Meyer, the store usually sees a big boost during ACL. The store sells apparel for the festival, as well as other items for festival-goers.

"Austin Rocks always saw it’s highest business the week of ACL festival," Meyer said. "When there’s no travel, we have no business."

Meyer, who also owns Toy Joy and Wild About Music, said Austin Rocks was doing about 30% of its regular revenue with local customers.

Not far away at Waterloo Records, owner John T. Kunz said he was expecting this to happen.

"I know everyone is really hurting right now, but those that can really need to support all the things in this community that we really love and that we want to be around for a long time to come once this is all behind us," Kunz said. "Support the restaurants you love, the record stores you love, the book stores you love, on and on and on. There’s ways to do it and be safe."

Steven Busti, the owner of the Museum of the Weird, said ACL is one of the busiest times of the year for the museum, though he added the business has seen a lot of growth in recent years. Busti said he is supportive of ACL's desicion.

"I really feel like the most important thing right now is safety for the public and not trying to have these big events," Busti said. "Money and profits shouldn't be at the top of everyone's list right now, it should be the health and safety of the public."

What travel and tourism experts are saying

Festival-goers broke travel records at the Austin-Bergstrom International Airport in 2019, with 31,165 travelers passing through for the second weekend.

Tom Noonan, Visit Austin's CEO, said the cancellation could be a big loss for multiple types of businesses and industries.

"This is part of that story of how hard COVID-19 has been on our community and just how important it is for each and every one of us to do our part in slowing this thing down," Huffman said. "It really is up to us to slow this down, and I think now more than ever we're motivated to do that because we're starting to miss some things that are really important to this community."