District Attorneys from California say unemployment fraud within jails and prisons in California is widespread and "honestly staggering."

SACRAMENTO, Calif — As hundreds of thousands of people wait to be paid their unemployment benefits in California, a group of District Attorneys said inmates across the state defrauded taxpayers out of hundreds of millions of dollars.

Sacramento County District Attorney Anne Marie Schubert said their investigation uncovered tens-of-thousands of inmates involved in the scheme. It is believed the losses total hundreds of millions of dollars, up to $1 billion. Schubert said this "will be one of the biggest fraud of taxpayer dollars in California history."

Death row inmates with claims opened in their names include Scott Peterson, who is convicted of killing his wife and unborn son. Also, serial killer Cary Stayner, who murdered four people near Yosemite in 1999.

“The murderers, and rapists, and human traffickers should not be getting this money,” said Schubert. “It needs to stop.”

Peterson's Attorney Pat Harris says his client did not open the claim with EDD.

"Scott’s name appeared on an application according to the investigation which is just beginning," Harris said in a statement emailed to ABC10. "Scott did not receive fraudulent benefits. We have no doubt that when the investigation is completed this will be proven."

Investigators are still working to figure out just how widespread the fraud is but early numbers from the California Department of Corrections and Rehabilitation show prisoners filed 35,003 claims, with 20,150 of them already paid. The total paid to CDCR prisoners is more than $140 million. The task force is now working to track down fraud at county jails and other detention facilities.

In Sacramento County, Sheriff Scott Jones said 650 inmates fraudulently filed for $6 million in benefits. Jones added those numbers are from September and could be two-to-three times higher now.

ABC10 previously reported on inmates at the San Mateo County Jail who were able to scam EDD out of hundreds of thousands of dollars of unemployment benefits.

After learning about the scam in San Mateo, the District Attorneys requested a list of inmates and compared it with a list of people who had received unemployment benefits from EDD.

El Dorado County District Attorney Vern Pierson said they met with EDD about technology to cross-match payments with inmate rosters five years ago. According to Pierson, EDD said the technology existed but the department never implemented it.

Pierson called the magnitude of fraud problems inside EDD "dysfunctional" adding, as you go up the chain of command, there is a "lack of responsibility on that side.”

EDD Deputy Director of Public Affairs, Loree Levy responded to the announcement from the District Attorneys in an email to ABC10:

"EDD has been working with the assistance of the DOL OIG on cross-matches with inmate populations to identify suspect claims.  We’re also pursuing how to integrate such cross-matches moving forward as part of enhanced prevention efforts during this unprecedented time of pandemic-related unemployment fraud across the country.  In addition, EDD is working collaboratively with state cyber-security experts.

The District Attorneys have now created a statewide EDD Fraud Task Force and sent a letter to Governor Gavin Newsom asking for his involvement. They also ask the governor to escalate resources to help investigate and prosecute the fraud. 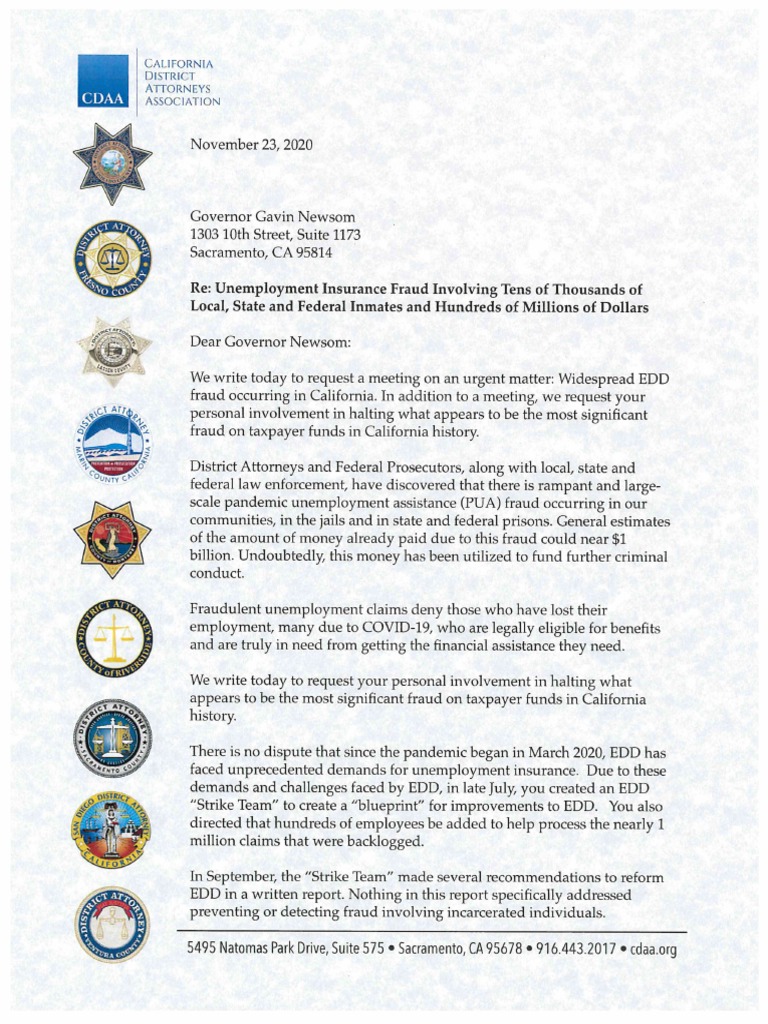 Letter to Gov. Newsom on widespread EDD fraud in prisons and jails
District Attorneys in California send a letter to Governor Gavin Newsom asking for his help to stop fraud involving tens of thousands of inmates and hundreds of millions of dollars in fraudukent unemployment benefits.

Governor Newsom responded in an email to ABC10:

“Unemployment fraud across local jails and state and federal prisons is absolutely unacceptable.

Earlier this year, I launched a strike team to expedite unemployment payments and to minimize abuse of the system. When we saw evidence of fraud in correctional facilities, I directed the Employment Development Department to review its practices and to take immediate actions to prevent fraud and to hold people accountable when fraud is not prevented.

Based on that direction, EDD and CDCR, in partnership with USDOL worked to match social security numbers of those in state custody to identify the scope of the problem and to hold people accountable.

To expedite and strengthen these efforts I have directed the Office of Emergency Services to stand up a task force to coordinate state efforts and support investigations by local District Attorneys. We will continue to fully partner with law enforcement and direct as many resources as needed to investigate and resolve this issue speedily.

While we have made improvements, we need to do more. Everything the state does will be done in partnership with the local District Attorneys and I thank them for their commitment to resolving this issue as quickly as possible.”

► GET THE LATEST DEVELOPMENTS: Get unemployment benefits news updates in your email with the Daily Blend newsletter. Sign up at www.abc10.com/email

“What was happening, people would apply from the jail. [They] were applying using the internet, which is available to them in our jail, and applying for EDD benefits, not entitled to them of course,” Stephen Wagstaffe, District Attorney for San Mateo County said.

Based on the search warrants ABC10 requested, an investigator with the San Mateo District Attorney’s office was listening in on jail phone calls on an unrelated case when he uncovered the elaborate scheme.

There were dozens of phone call records where inmates went back and forth trying to get people’s full names, social security numbers and birthdays to start filing.

“They were doing it from the jail, using the county jail phones and the iPads they’re given in jail,” Wagstaffe said. “The inmates are given iPads and they were able to do communication to EDD and file applications to the county jail.”

They operated the scheme out of a San Mateo County Jail and used 30 different inmate’s names to file claims. Wagstaffe says EDD paid out between $250,000 to $300,000 in unemployment benefits.

“I watch on your television station, and other television stations, people are unable to provide for their own sustenance, for housing, food, because EDD is so backed up," Wagstaffe said. "And seeing these people able to go in and take money and shove those people further down the line, that’s pretty egregious conduct.”

► GET THE LATEST DEVELOPMENTS: Get unemployment benefits news updates in your email with the Daily Blend newsletter. Sign up at www.abc10.com/email

Several of those charged have pleaded guilty. For some who are still serving time, they will get a few years added to their sentence and will have to pay back the state in restitution.