It started with a black and white picture and a piece of banana cream pie. 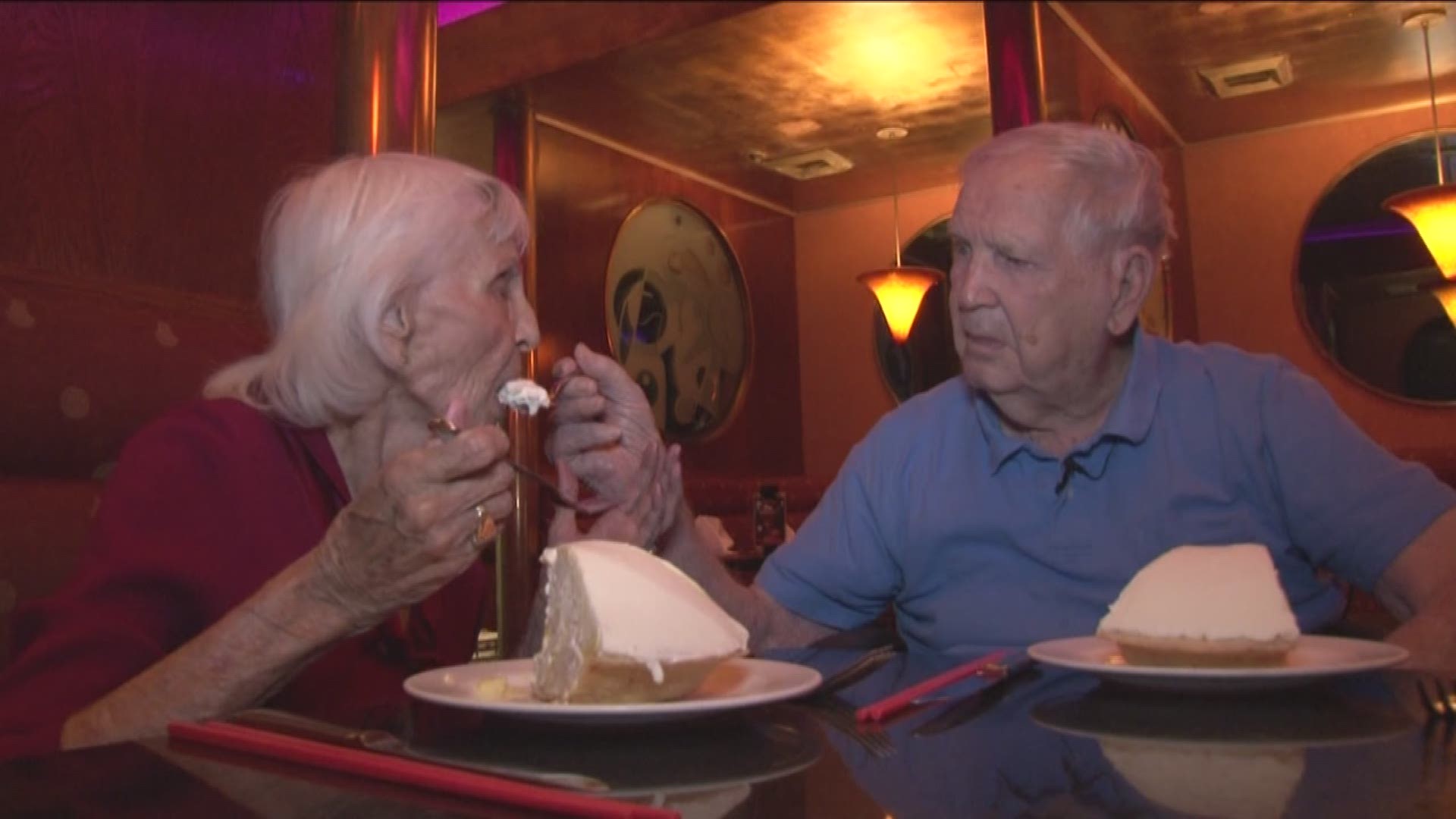 It started with a black and white picture and a piece of banana cream pie.

Bill and Claudia Norley fell in love just weeks after the attack on Pearl Harbor. Bill was planning to join the Air Force. A friend showed Bill a picture of Claudia.

"I saw her picture on the piano and almost fell over," Bill said.

After an introduction, Bill found himself outside his future wife’s window late at night. Bill’s late night visit was not taken to kindly by Claudia’s father.

“He was throwing little rocks at my window. It woke my dad up," Claudia said.

"He heard those rocks. He couldn’t figure out what was going on." said Bill.

It took some smooth talking, but after Bill explained he worked the night shift repairing planes at McClellan Air Base, Claudia's father allowed the two meet for some dessert after his shift.

"I had to buy her two pieces of pie before I asked her to marry me," Bill said.

Wedding bells rang on March 21, 1942. Shortly after the honeymoon, Bill joined the Air Force and was sent to college in Pullman, Wash.

"I packed my bedding and my clothes and drove up to him in the car," Claudia said.

This would be the beginning of a lot of traveling for Claudia as she followed Bill everywhere the Air Force sent him.

"I had never left California," Claudia said. "I had to drive in the snow. It was my first time."

Claudia eventually landed a job with the military repairing planes.

"One plane would come through and I was up on a ladder unscrewing the rocker box cap," Claudia explained. She didn't know it at the time, but she was working on the same planes that her husband was flying.

“That’s where I learned the word trust...it really meant something," Bill said.

After the war, Bill and Claudia bought some vacant land in Sacramento which later became Norris Avenue. It was a rough couple years, building supplies were rationed because of the war. Bill had to scrap building supplies from an old apartment to construct their home.

“For a while we didn’t have plumbing,” Claudia said.

The couple raised the first of their three children in the garage while the house was constructed, but if you ask this resourceful couple, its the hardships that made up best days of their lives.

“You have to think of it this way...what do you have to look forward to when you are 97 [years old]," Bill asked. "We have been through a lot. Can’t get much harder."

Seventy-five years of marriage wasn't easy, but for Bill and Claudia, it’s the little moments like banana cream pie that make up life’s sweet rewards.

1943 Bill joined the Army/Air Force to become a pilot. He was sent to Eagle Field for

Primary training as a pilot. It was at this field where Claudia worked on the

Planes that Dad flew. After graduation he was sent to the “West Point” of the

1944 He graduated as a pilot at Marfa Texas and was then sent to Carlsbad, New

Air Force as a 2nd Lieutenant. He and Claudia then moved back to

Sacramento where they bought some property, built a house and started a family.

Base. He states, “Her love kept me from dying because flying was more dangerous

Then I ever expected. When flying you never have a second chance if you make a

Claudia worked as a Domestic Engineer and took care of the house, kids and pets.

Claudia then started working in the Media field from 1980-1990. They spent many

Years traveling and camping with their friends in their motor home. They loved

Fishing, potluck dinners and traveling to Europe to visit relatives. They enjoy their

When asked what their advice for a long marriage is, they answered, “Love, Love