'I was personally offended,' Vidor Police Chief apologizes for alert sent out during Tuesday's manhunt

The controversial part of the alert message reads: "Notify Vidor Police if you see any black males in the area." 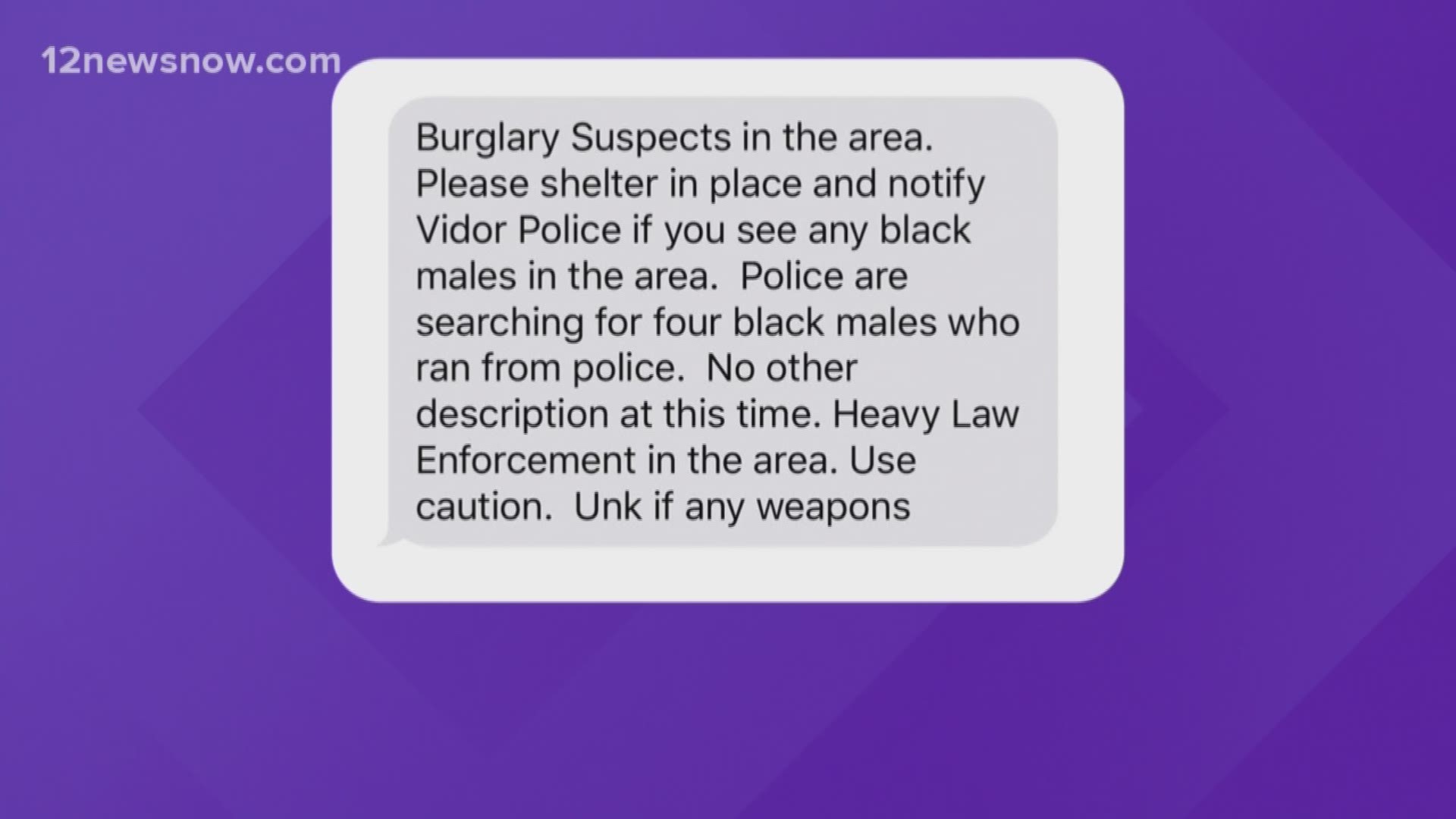 The text alert was sent out during the manhunt, and told residents to shelter in place, but the chosen wording created some chatter on social media.

Part of the alert message said, "Notify Vidor Police if you see any black males in the area."

Police Chief Rod Carroll said he knew the alert had been sent, but had not seen the text until Wednesday morning.

He said when he saw it, his heart dropped.

"I want to apologize to anyone who was offended because I will tell you I was personally offended when I read that message that went out," said Chief Carroll.

The police chief said the message was too vague and did not include all of the details.

"It did not include A: the 1800 block of North Tram was the location of where we were looking for these individuals, and the word 'suspicious. Just because you're a black male walking through Vidor, Texas doesn't make him the suspect. We need to get past this stigma," explained Carroll.

Tuesday night, cops were looking for four men who stole cash from an ATM in Alabama.

Officers got a tip they were driving through Vidor and tried to pull them over, but the men took off around 6:30 p.m. on Tuesday.

Chief Carroll said the alert that was sent does not indicate how he wants the department perceived.

"We are professionals in law enforcement. We should treat people with respect. All people," Carroll said.

He said he has talked to the person who sent out the alert and is handling the situation internally.

"I trust my folks and this is something we should have made sure was very specific in what we send out and being very careful in the wording we are using," said Chief Carroll.

Louis and Mary Robins were home when the whole situation started.

The said they had no idea anything was going on until half a dozen cop cars showed up at their home.

"Right at dark, the cops were all over the place looking and helicopters was flying over here and lit the place up. It was pretty exciting last night though, you know, we don't have much excitement here but we did last night."

As for the four men, they have not been caught.

Police think they were picked up by another car, and are no longer in the area.