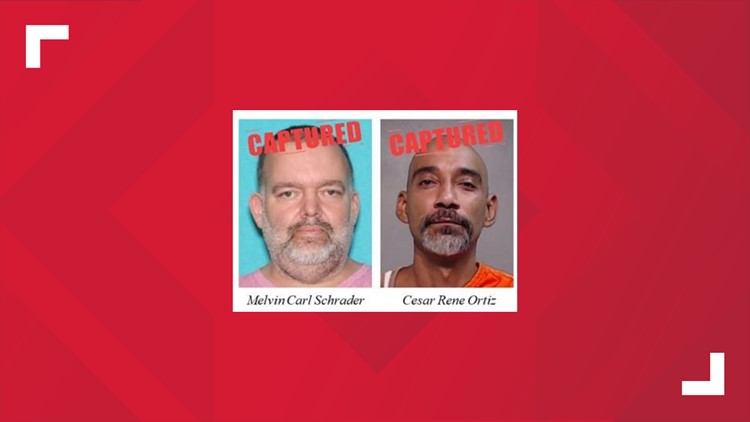 DPS: Two of Texas' Top 10 most wanted have been captured

The Texas Department of Public Safety announced in a press release that two of the Texas 10 Most Wanted - a sex offender and a fugitive - have been captured.

Since the arrests were not the result of Crime Stoppers tips, no rewards will be paid.

Working off investigative information, special agents from the DPS Criminal Investigations Division located and arrested Schrader at an apartment complex in Waco.

Schrader had been wanted since April 2018, for failure to comply with sex offender registration requirements after absconding from his last known address in Bellmead, near Waco. His criminal history includes a conviction of indecency with a child-sexual contact after an incident with a 3-year-old girl in McLennan County.

Ortiz was captured by DPS special agents who were working off investigative information. He is affiliated with the Texas Chicano Brotherhood gang and was found at a house in Edinburg. The Texas Highway Patrol and Edinburg Police Department provided assistance in his arrest.

Ortiz had been wanted by law enforcement since March for violating his parole after absconding from his last known address in Edinburg. Ortiz is a violent offender with a history of aggravated assault, burglary, drug and weapon charges.

So far in 2019, DPS and other agencies have arrested 18 Texas Most Wanted fugitives and sex offenders, including nine sex offenders and seven gang members. In all, $25,000 in rewards have been paid for tips that have yielded arrests.

Texas Crime Stoppers, funded by the governor’s Criminal Justice Division, offers cash rewards to any person who provides information that leads to the arrest of one of the Texas 10 Most Wanted fugitives or sex offenders.