Family and friends gathered to say their good-byes and remember the 27-year-old. 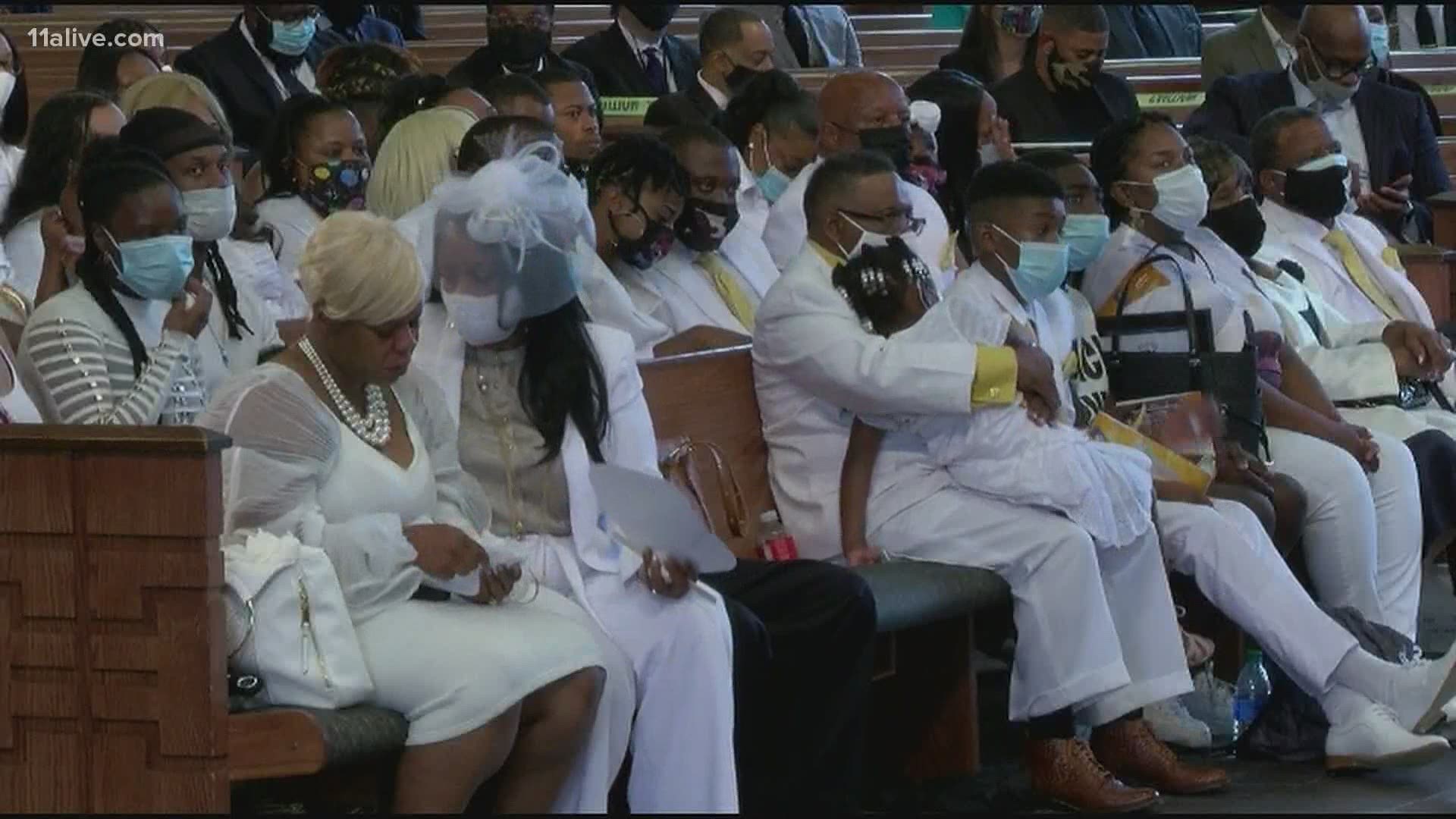 ATLANTA — Rayshard Brooks was remembered today at the church where the Rev. Martin Luther King Jr. once preached.

The private funeral was held at Ebenezer Baptist Church. The Rev. Raphael Warnock delivered the eulogy.

“Rayshard Brooks wasn’t just running from the police. He was running from a system that makes slaves out of people. A system that doesn’t give ordinary people who’ve made mistakes a second chance, a real shot at redemption,” Warnock wrote.

The following are updates from the service.

3:50 p.m. - The funeral procession for Brooks passes through the parking lot of the Wendy's restaurant where he was killed.

3:09 p.m. - The funeral recession has begun, as pallbearers carry Brooks' casket out of the sanctuary.

"Rayshard Brooks is the latest high profile casualty in the struggle for justice and a battle for the soul of America. This is about him, but it is so much bigger than him," Warnock said.

You can read the full eulogy here.

2:15 p.m. - Congressman John Lewis, Mayor Keisha Lance Bottoms, T.I. and others are acknowledged for their presence during today's service.

2:07 p.m. - Brooks' cousin Jymaco Brooks remembered how full of life and love his cousin was.

"You couldn't stay mad at him because he would do something in five minutes that would make you laugh," he said.

"We would love on anybody," Jymaco Brooks added. "All he wanted to do was smile, crack jokes, dance a little bit and live."

He said it was because of the family he came from.

"We didn't have a lot of anything, but we had a whole lot of love for each other," he said. "We have to be thankful for what we've got while we got it. Because when it's gone, all you can do is sit around and think about what you ain't got no more."

Watch his full remarks below.

2:05 p.m. - "Let's make my uncle's death make us better humans," pleaded the daughter of a Brooks' friend through tears.

1:50 p.m. - Dr. Bernice King opened: "We really shouldn't have to be here today. This should not have happened."

1:46 p.m. - Rochelle Gooden, Brooks' mother-in-law, spoke on her affection for him, saying he was more than just a husband to her daughter.

Gooden described how Brooks took care of his family, "He tried to do what he could do, and he did a good job."

Gooden spoke on how she used to have barbecue challenges with Brooks, and recalled his big smile and love for old school music. She said he lives on in his family and his legacy.

"He's not gone," Gooden said. "That's what he would want us to do. To love, not the love he gave us. But to love one another like God loved us."

"Ray was an individual who made a lasting, positive impact on us, and our lives will forever be changed for the better having known him," said Ambrea Mikolajczyk, a colleague and friend.

"He had overcome his circumstances," she said, adding that he was trying to provide for his family despite his challenges with experiencing the justice system.

She called Brooks' death a tipping point, a point in which change will finally take place.

1:28 p.m. - Gospel singer Tamela Mann performs "I can only imagine," "Take me to the King," and "I surrender all" virtually.

1:23 p.m. - "Bring healing to our land. Heal our land," intones Bishop Dale C. Bronner, the Senior Pastor of Word of Faith Family Worship Cathedral. "We pray that there will be systemic change."

1:15 p.m. - Tomika Miller, wife of Rayshard Brooks, holds their 2-year-old daughter while pausing with her children during the family processional at his funeral.

1:12 p.m. - The Martin Luther King Sr. Choir sings at the beginning of the Rayshard Brooks funeral. It's a virtual performance.

A public viewing was held Monday at the same church.

Brooks was shot and killed on June 12 during a confrontation with Atlanta Police Department officers Devin Brosnan and Garrett Rolfe in the parking lot of a Wendy's on University Avenue in southeast Atlanta.

1 / 7
AP
A single white rose sits on the coffin cover during Rayshard Brooks‚Äô public viewing at Ebenezer Baptist Church on Monday, June 22, 2020 in Atlanta. Brooks, 27, died June 12 after being shot by an officer in a Wendy's parking lot. Brooks' death sparked protests in Atlanta and around the country. A private funeral for Brooks will be held Tuesday at the church. (Curtis Compton/Atlanta Journal-Constitution via AP, Pool)

The interaction between Brooks and the officers began as a DUI call when the officers responded to a report of a man sleeping in a car in the drive-thru line. A scuffle ensued and Brooks took the officer's Taser. As he ran away, the Georgia Bureau of Investigation said Brooks turned to fire the Taser -- which is when Rolfe shot Brooks two times.

Since the night Brooks was shot, demonstrators have gathered at the restaurant as well as the Zone 3 Atlanta Police Department precinct in protest.

Fulton County District Attorney Paul Howard charged both officers in the incident, including a felony murder charge for the officer who pulled the trigger.

'We will not tolerate lawlessness' | Interim APD chief addresses tensions but reaches out to protesters, officers

Natalie White: Rayshard Brooks mentioned the name to police. It just came up again in a warrant