The pro-Nazi symbol was put up at several locations within the memorial. 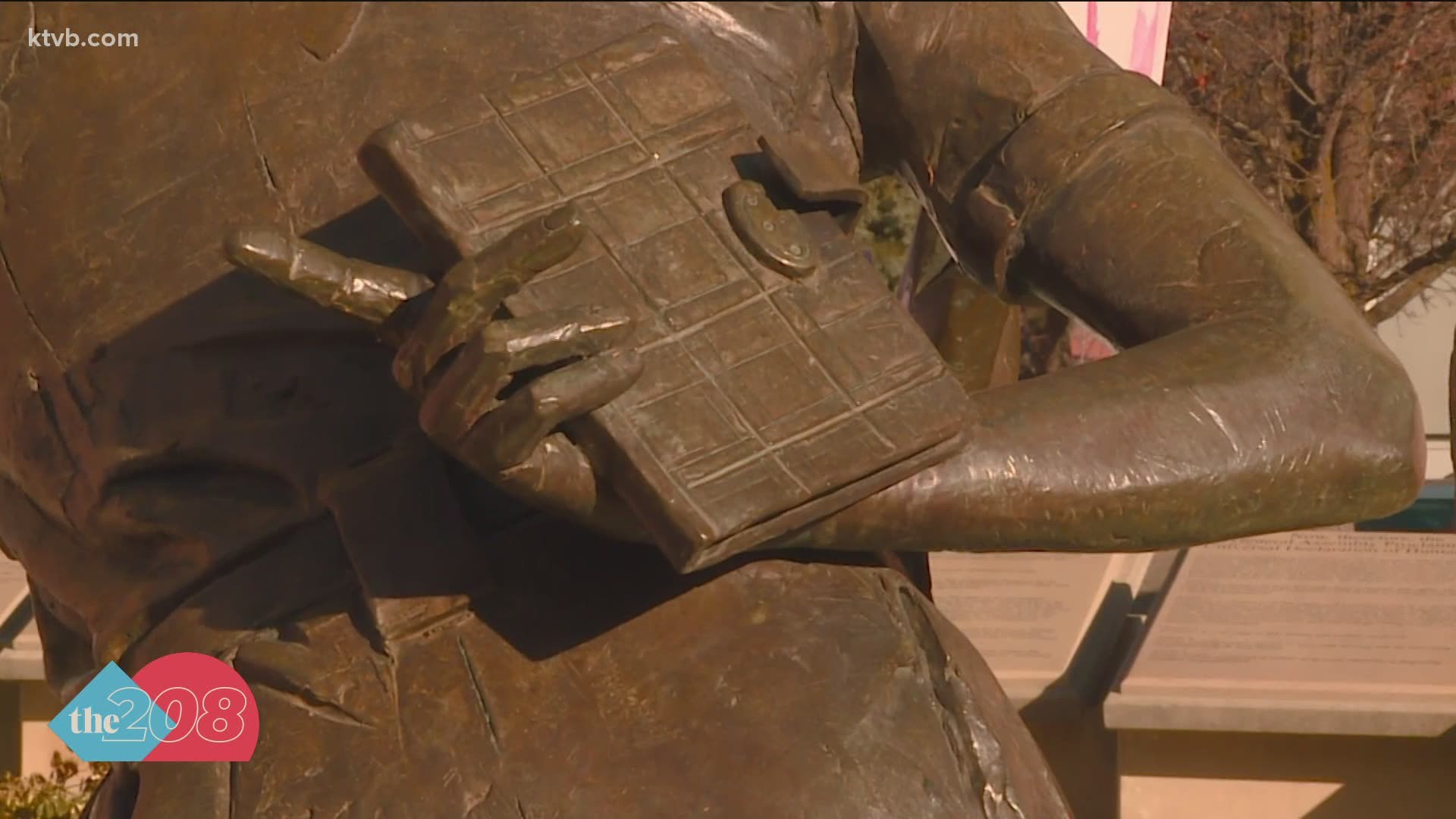 The Wassmuth Center for Human Rights said stickers with swastika symbols were placed throughout the Anne Frank Human Rights Memorial in Downtown Boise overnight on Tuesday.

The Boise Police Department released a statement on Wednesday morning that the incident actually happened sometime between Monday evening and early Tuesday morning.

Officers responded to reports of vandalism on 8th Street at about 9 a.m. Tuesday.

The signs read "We are everywhere." Boise PD added that nine of the stickers were found and promptly removed.

In a Facebook post on Wednesday morning, the Wassmuth Center said "I fear for what is happening to our community."

Dan Prinzing is the Executive Director of the Wassmuth Center, he says the specific placement of the stickers is notable.

“The one that becomes so poignant is the one that is placed right on Anne’s Diary, right there on the statue. That one just hurts and for us this has just become such a sad day," Prinzing said.

The memorial honors the memory, legacy, and wisdom found within the diary of holocaust victim Anne Frank. Frank penned a diary while in hiding from Nazi persecution as Jewish people across Europe were targeted and executed in concentration camps.

The Boise site is the only Anne Frank memorial in the United States, it serves as an educational park designed to engage visitors to think, to talk with one another, and to respond to human rights issues. Prinzing says it can create tough topics of conversation like, who are we as a community?

“When people have asked, is this who we are, I’ve always countered that but now you really begin to question that when such can occur, when such has been emboldened and it doesn’t stop then you have to question how do we stand up to hate," Prinzing said.

Stickers of swastikas were left across Idaho’s Anne Frank Human Rights Memorial overnight. This was posted this morning by the Wassmuth Center for Human Rights in #Boise. “I fear for what is happening to our community.” pic.twitter.com/2ENLxN2Yld

Prinzing says the stickers have a direct and simple message he has thought a lot about.

“Proudly proclaiming, they are everywhere. They are here. Well, then we do have to question: what is the moral fiber of our community? Where are we at the core," Prinzing said.

With that said though, Prinzing knows there is so much good in our community. He says that good and those who are willing to stand up and speak out for what is right cannot be silent any longer.

“Just as the stickers have said they are everywhere, well good people are everywhere too. Good people need to step up and stand up and say this is wrong, this is not tolerated in our community. We are better than this," Prinzing said.

Boise Mayor Lauren McLean said in a statement, "The Anne Frank Memorial was vandalized by racist criminals. Nine stickers with swastika symbols were placed throughout the memorial. This is shocking and disturbing, and we know it does not reflect the values of our community. The vandalism will be investigated, and the people responsible will be held accountable."

The center later posted, "The Idaho Anne Frank Human Rights Memorial was built as a physical statement of our shared values. One of those values includes standing up to confront hate."

Police say investigators are reviewing surveillance video from the surrounding area and that the investigation is ongoing.

Mayor McLean added that she is working with community leaders to make sure everyone feels safe in the future and that "this is not normal."

"Bad actors who use racist and violent rhetoric are not welcome in this community. We are committed to an open and welcoming city for everyone, and leaders from the business, cultural, and religious community stand with us," she said.

After seeing the news, Boise resident Toni Lawson placed flowers and a message where a swastika was previously placed. She tells KTVB she is one of the vast majority who chooses love over hate.

“We are going to have to be louder. It also tells us our work at the Wassmuth Center is not done. Not only is what we do necessary, it’s probably never been than in this moment,” Prinzing said. “When you hear it, when you see it, don’t be silent. Stand up.”

The Wassmuth Center for Human Rights was founded in 1996 and opened the Anne Frank Human Rights Memorial in Boise in 2002.

This is the Boise we all know and love. ❤️

This morning, Boise resident Toni Lawson delivered this to the Anne Frank Memorial.

Thank you, Toni. Thank you. https://t.co/nchAXy7h7Z

1 / 5
Wassmuth Center for Human Rights
The Anne Frank Memorial in downtown Boise was vandalized overnight on Tuesday, December 8, 2020. Stickers adorned with swastikas read "We are everywhere" were placed throughout the memorial.

RELATED: Idaho health board member emotionally leaves meeting as protesters bang on door while her 12-year-old is home alone

WATCH BELOW: Central District Health board meeting halted due to 'intense level of protesters'