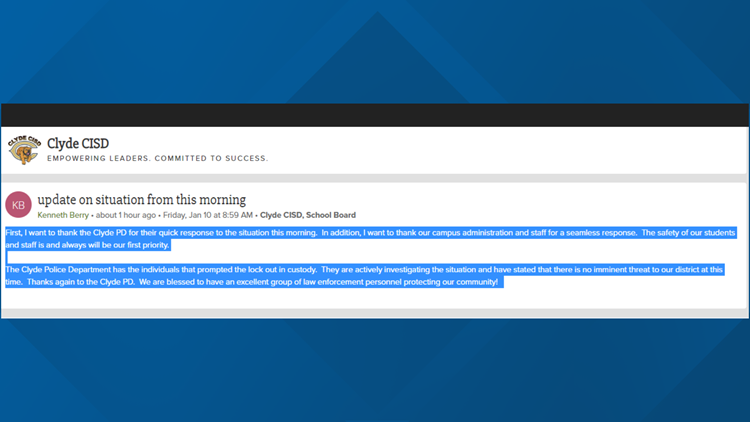 CLYDE, Texas — Clyde Consolidated Independent School District was placed on lockout as a precaution Friday morning after Clyde police received a call regarding a teen runaway and several firearms taken from a home.

Clyde's Chief of Police Robert Dalton said, “Initially we responded to a report of a runaway call at 6:45 a.m. During that investigation we learned several firearms were taken from home."

Dalton said the lockout was instituted because the call came in right as school was getting ready to start.

"So as a precaution, we notified school campuses, we had no credible threat to any school at this time but we notified staff," he said. "We located the juvenile shortly after and recovered the guns, and learned there was another juvenile involved in the taking of the guns. We took both the 14- and 16-year-old juvenile into custody."

Dalton said the department later discovered the intent of taking the guns was to sell them, and there was never an active threat to schools. Neither of the juveniles taken into custody was currently enrolled in CISD.

The Clyde CISD posted the following message on social media:

“First, I want to thank the Clyde PD for their quick response to the situation this morning. In addition, I want to thank our campus administration and staff for a seamless response. The safety of our students and staff is and always will be our first priority.

The Clyde Police Department has the individuals that prompted the lock out in custody. They are actively investigating the situation and have stated that there is no imminent threat to our district at this time. Thanks again to the Clyde PD. We are blessed to have an excellent group of law enforcement personnel protecting our community!"