We analyzed polling locations across Texas' major cities to show us who is left with fewer options and where. 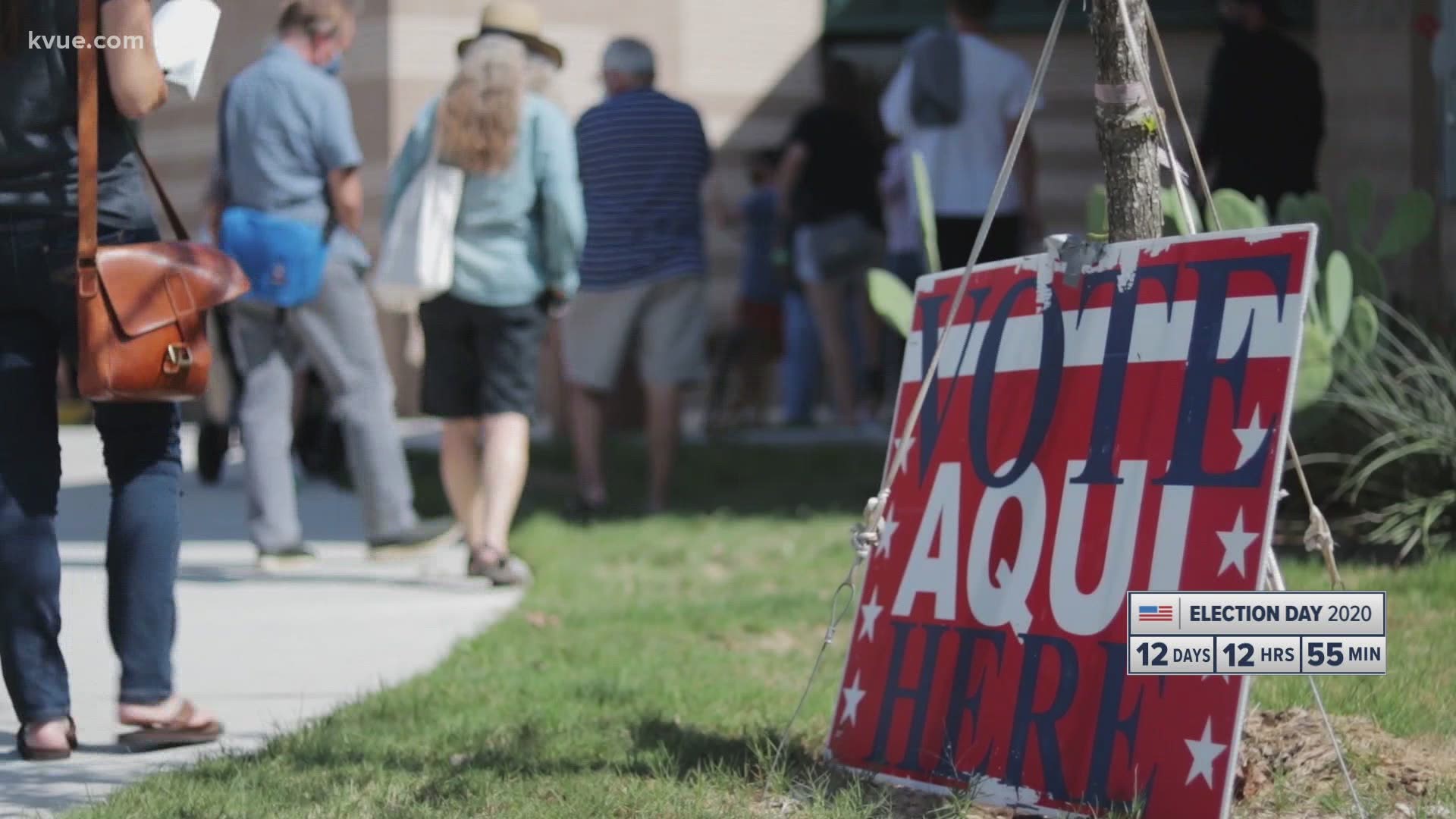 A poll worker tried to make sure everyone had a sample ballot and a finger glove – small tools to help keep voters safe and the line moving.

This early vote site is the only one for ZIP code 78744. It’s the only polling place in far, southeast Austin.

“I was excited because of the early voting and with all the drama with the election,” Ana Kirk said.

Kirk is a Travis County voter, over 65 and disabled. She planned to vote absentee but said she never received her ballot.

“They’re going to be bringing out a machine and everything for you,” Joe Cascino said.

Cascino is a student at the University of Texas. He helped Kirk find where to go for curbside voting. For Kirk, this location is in her neighborhood, and she can drive to it. Not everyone can get here easily.

“There’s no public transportation to get us here,” Emily Rose said.

Travis County Elections Office lists which polling locations are within a 5-minute walk from a bus stop. The Dove Springs Rec Center is not one of those locations.

“It comes down to people not having access to vote. People should be able to walk to a polling location,” Rose said.

Rose lives 15 minutes away in ZIP code 78747, and where nearly 60% of the population is Hispanic. Her ZIP code has zero early voting locations.

So far, only one is scheduled for Election Day.

“We've had to be in some places that are a little different than what we've had before because we want a space that's big enough for voters so that they can socially distance,” Travis County Clerk Dana DeBeauvoir told KVUE News in early October.

The Texas Secretary of State powers a website for voters to find their nearest location at VoteTexas.gov.

We pulled polling locations from some of the most populous Texas counties and compared it with the 2018 American Community Survey by the U.S. Census Bureau.

Analyzing the race by ZIP codes and looking at polling locations in those codes, we found at least one early voting site was listed for nearly 54% of all Hispanic-majority codes and compared to 48% for all White-majority codes.

Long lines were in predominantly White-majority ZIP codes for Tarrant County’s first day of early voting. The data shows 40% of all Black-majority codes have at least one voting site.

RELATED: In spite of an extra week of early voting, Texans wasted no time getting to the polls

However, going by poll count, 6% of the total amount of early voting polling locations are in Black-majority ZIP codes.

Tarrant County has a Black population of 16%. By comparison, the White population for Tarrant County is 47%, but 69% of the total early election polling locations are in White-majority ZIP codes.

“Representation is at the core of the process, and if we are systematically excluding some voters because of the location of the polling place, then it's really underrepresenting Texas,” Dr. Brandon Rottinghaus, Ph.D., University of Houston.

We asked Rottinghaus to review our analysis.

“What we want to know is, are there enough polling places in communities where you've got specific subgroups? That's a big part of what the County Commissioners Courts do in terms of placing these polling places in areas where they're accessible. Polling places are all about location. Just like real estate. So if you don't have it in the right place, you're not going to get the turnout you need and you may end up reducing someone's participatory impact. That's the real danger, I think. And what we see from these results is that there is some potential that there are groups that might not get the same representation that they might like,” Rottinghaus said.

Harris County has a 43% Hispanic population. The data shows 25% of Hispanic-majority ZIP codes have an early voting site.

Rottinghaus says there is no broad stroke to say one set of people is marginalized. He says it depends on your area.

“They're going to come back and let me know that my vote was cast,” Kirk said after she filled out her ballot.

It took Kirk more than an hour to vote, but she said she doesn’t want her story to discourage others.

Voting locations can change. In Travis County, Kirk’s polling site was not initially listed on the Secretary of State’s website.

To find the most up-to-date location, visit your local elections office.

Texas Longhorns band will not attend Baylor game, play 'The Eyes of Texas' due to lack of 'necessary instrumentation'