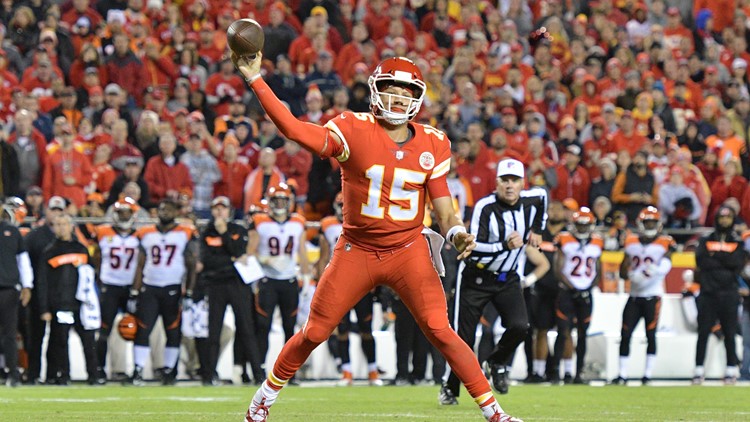 Photo by: Denny Medley
Kansas City Chiefs quarterback Patrick Mahomes (15) throws a pass during the second half against the Cincinnati Bengals at Arrowhead Stadium in Kansas City, Missouri.

Mahomes threw for 50 touchdowns and 5,097 yards in 16 games and led the Kansas City Chiefs to their first AFC championship game since the 1993 season.

Awards the Piney Woods gunslinger racked up during the 2018 season include:

He was also chosen to be the cover athlete for Madden 20.

Due to his skill and growing popularity, Mahomes inked deals with Advocare, Heinz, Oakley and Adidas. His NFL jersey was ranked third on the NFL's list of top selling jerseys for 2018.

The popular quarterback even launched an online merchandise store and developed a children's foundation, as well.

The Kansas City Chiefs are nominated for Best Game for their Monday Night Football thriller against the Los Angeles Rams. The Rams topped the Chiefs 54-51. Other Best Game nominees are LSU vs. Texas A&M (NCAAF - Aggies won in seven overtimes, 74-72, in the highest-scoring game in FBS history) and Notre Dame vs. UCONN (NCAAW Final Four - Notre Dame defeated UCONN, 81-76, after 26 lead changes).

On Thursday, a shoe donation on Mahomes' behalf will be made to WISD student-athletes.