Eyes on the tropics: Hurricane Delta moving across the Yucatan 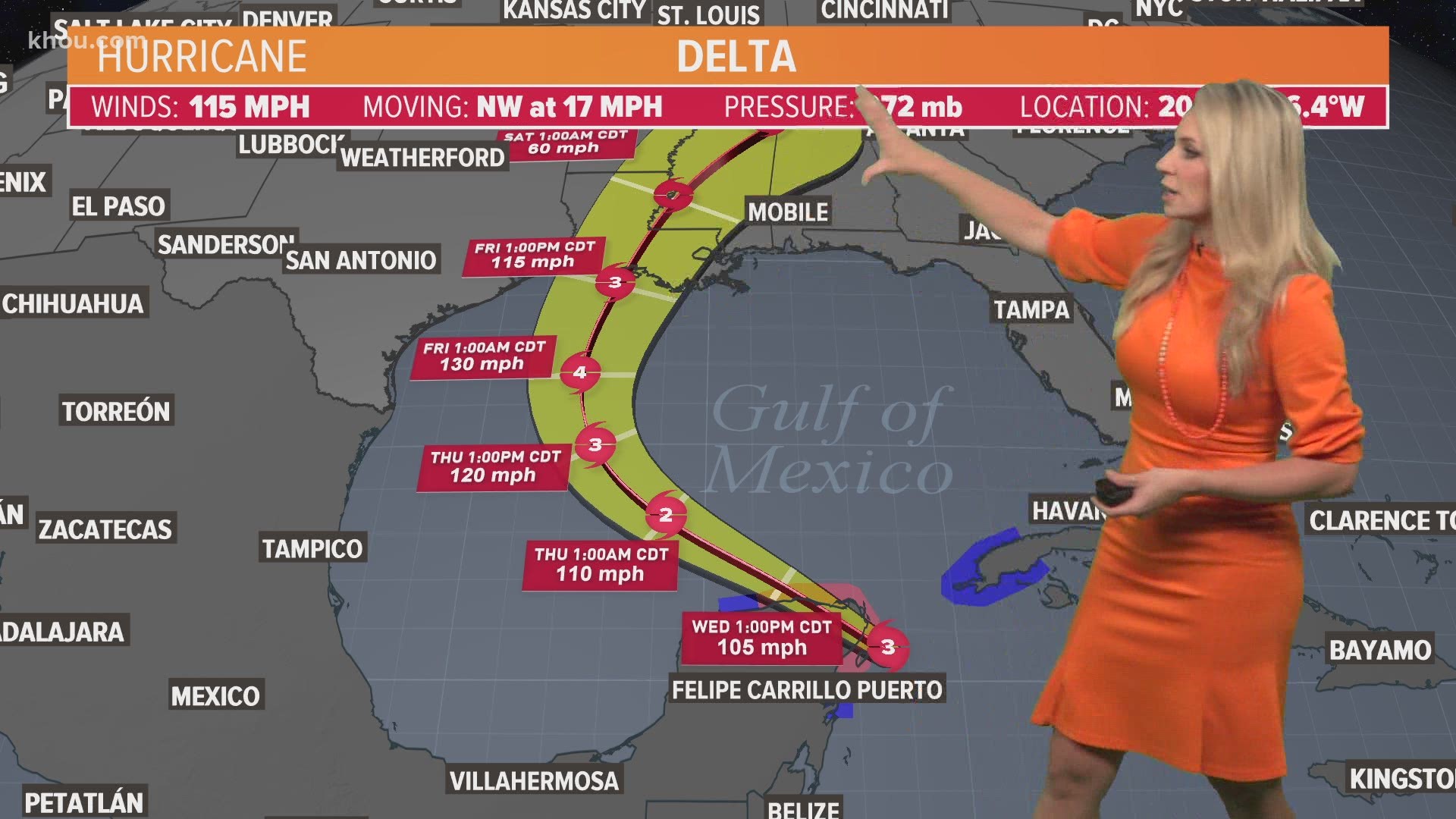 **This page will no longer be updated. For the latest track and timing of Hurricane Delta, check this page**

The tropics have once again come alive and there's one system out there that our meteorologists are keeping a close eye on. On Monday morning, Tropical Depression 26 strengthened into Tropical Storm Delta. By Monday night, Hurricane Delta was forecast to become a Cat 3 storm in the Gulf of Mexico before making landfall later this week.

The National Hurricane Center will stop monitoring Gamma after it became Post-Tropical Cyclone Gamma in the NHC 10 p.m. update on Monday.

Hurricane Delta continues to strengthen as it nears the Gulf of Mexico. As of 4 am Tuesday, the storm's maximum sustained winds had increased to nearly 100 mph with higher gusts. Additional "rapid" strengthening is expected during the next day or so, according to the NHC. It's expected to be a major hurricane when it nears the Yucatan Peninsula Tuesday afternoon or evening.

The storm is moving toward the west-northwest at nearly 15 mph and a faster northwestward motion is expected Tuesday through Wednesday night.

This is the latest forecast cone for Hurricane Delta

#BREAKING: Here’s the new cone as of 10pm Monday. Cone remains east of Texas. However, despite models shifting pretty far west on Monday, confidence remains fairly high that #Delta will miss Houston to the east. Definitely keep tabs on this one! #KHOU11 pic.twitter.com/cBcKnKdEDZ

These are the latest spaghetti models for Hurricane Delta

Key messages for Delta from the National Hurricane Center

1. Dangerous storm surge and hurricane conditions are expected within portions of the northern Yucatan Peninsula of Mexico beginning Tuesday night, and a Hurricane Warning is in effect.

2. Heavy rainfall will affect portions of Jamaica, the Cayman Islands, western Cuba and the northern Yucatan Peninsula during the next few days. This rainfall could lead to significant flash flooding and mudslides.

3. Tropical storm conditions are expected in portions of the Cayman Islands beginning Monday night or early Tuesday, and a Tropical Storm Warning is in effect.

4. Delta is forecast to approach the northern Gulf Coast late this week as a hurricane. While there is large uncertainty in the track and intensity forecasts, there is an increasing risk of dangerous storm surge, wind, and rainfall hazards along the coast from Louisiana to the western Florida Panhandle beginning Thursday night or Friday. Residents in these areas should ensure they have their hurricane plan in place and monitor updates to the forecast of Delta.

While most of the computer models take this well east of Houston, we'll need to monitor the system for any deviations west in its eventual track.

This is the satellite imagery of Hurricane Delta at 10 p.m. Monday

Gamma formed Saturday and quickly powered up into a strong tropical storm with 70 mph winds. In fact, it strengthened so rapidly that the NHC was forced to issue a hurricane warning for the Yucatan Peninsula. In the NHC's 4 p.m. update on Monday, the storm had weakened into a tropical depression and at 10 p.m. the storm had weakened again.

Now Post-Tropical Cyclone Gamma the remnants of the storm are expected to produce an additional 2 to 4 inches of rainfall with isolated maximum amounts of 8 inches across portions of the Mexican states of Yucatan, Campeche, and Tabasco.

NHC said it will not be providing any more updates on the system.

The post-tropical cyclone is currently centered along the northern coast of the Yucatan peninsula and will move inland through Monday. Maximum sustained winds are nearly 35 mph with higher gusts. Gradual weakening is anticipated and Gamma is forecast to dissipate by Wednesday.