A former Fort Worth firefighter says she was forced into an early medical retirement after reporting multiple incidents of sexual harassment and three assaults. 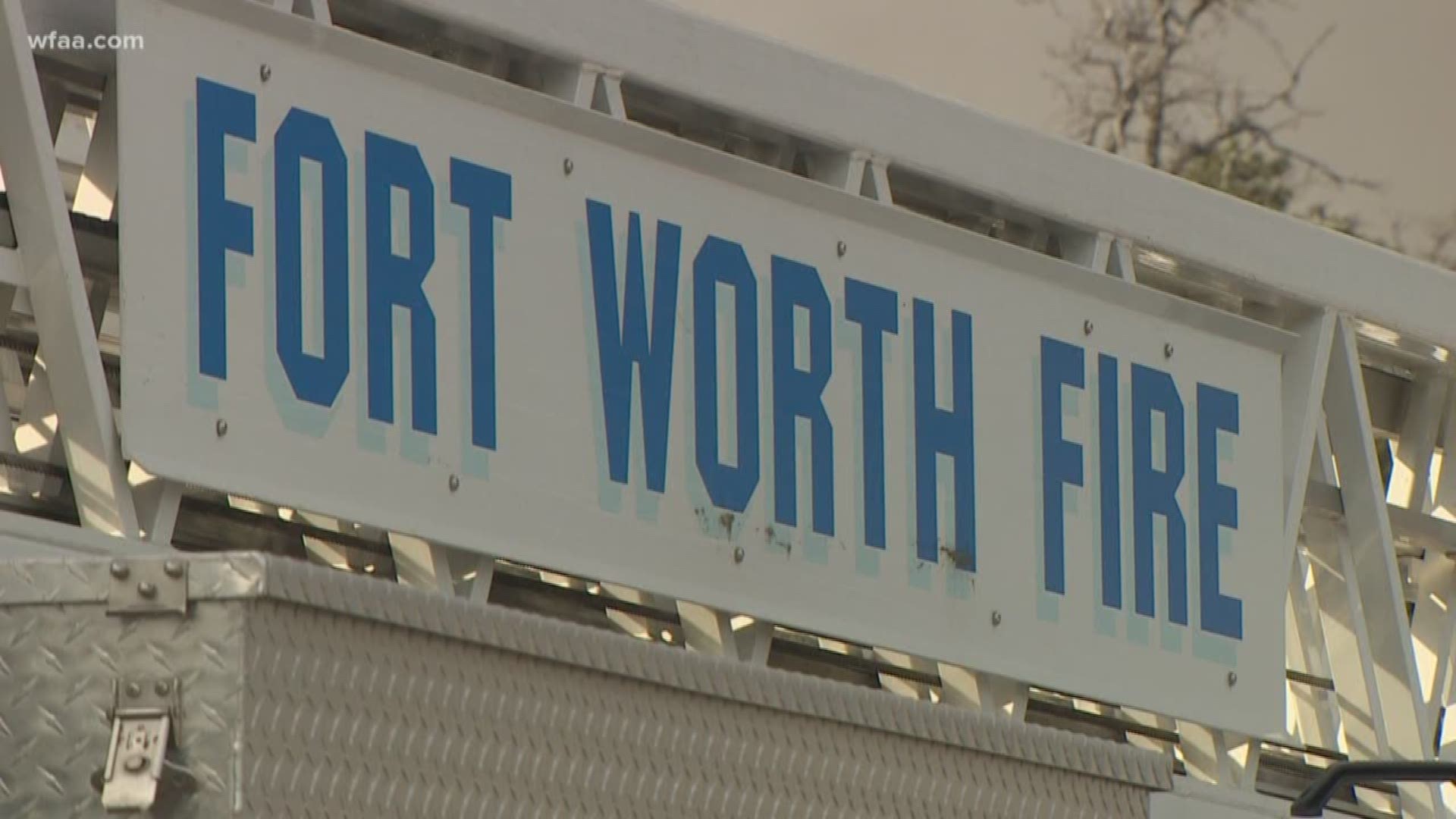 A woman is suing the City of Fort Worth and six employees after she said she was raped three times and endured years of continuous sexual harassment toward the end of her more than 20-year career as a firefighter.

Identified as Jane Doe in the lawsuit filed on Nov. 27, the former Fort Worth firefighter said she was transferred multiple times and forced into an early medical retirement after reporting numerous incidents of sexual harassment.

In each case, the lawsuit says, Doe was punished with transfers and jobs beneath her experience while her abusers remained in their positions without repercussions.

The lack of action, the suit claims, was due to then-Support Services Chief Ken Stevens' "policy of maintaining the status quo among his male subordinates" as he ran his campaign for deputy chief.

In response to the suit, the Fort Worth Fire Department released a statement acknowledging they received a complaint from a former employee on June 20.

"We immediately opened an internal investigation as well as referred the complaint to the Fort Worth Police Department for review," the statement says.

Police also released a statement saying they assigned a detective from the Sex Crime Unit in response to the forwarded complaint but were unable to reach Jane Doe despite several attempts.

In the suit, Doe says she was raped by two supervisors in three separate incidents. She also claims another supervisor masturbated in her presence while at a fire station and another firefighter slapped her buttocks in front of her 8-year-old daughter.

"When her abusers within the department were done with her, she was forced to medically retire at a fraction of the pension she had worked over 20 years to obtain," the lawsuit says.

The lawsuit names the defendants as the City of Fort Worth, along with the former Fort Worth Fire Department Chief Ken Stevens, and five current department firefighters.

According to the suit, Jane Doe started her career with the Fort Worth Fire Department in 1997.

“She rose quickly through the ranks, becoming a trailblazer and one of the most prominent firefighters within the FWFD,” the lawsuit says."She had never received a reprimand and was even chosen to be depicted on advertisements for the Fort Worth Fire Department to aid its efforts of recruiting more women into the FWFD."

While she spent more than a decade with the department without incident, Doe says her "nightmare" began in May 2013, when a coworker with a known history of violent outbursts threatened to kill her.

Doe said she reported the threat to her supervisor, Lt. Carol Woodard Jones.

For nearly two weeks after the incident, Doe remained on the same shift with the coworker as the complaint was passed on to Stevens.

His response, the suit says, was to transfer Doe to another shift without any disciplinary action given to the coworker "due to [Stevens'] desire to keep a clean administrative record" during his candidacy for deputy chief.

"This greatly disrupted [Doe's] schedule and disrupted her ability to care for her young daughter," the suit says.

After her transfer, Doe says she became a target of Jones, who she said was a friend of the coworker at the center of the complaint. The suit alleges Jones "attempted to find errors in every aspect of Jane Doe's job performance."

Doe reported Jones and was once again transferred with no disciplinary action given to anyone else.

Her transfer to a supply warehouse in the summer of 2013 was the start of her sexual harassment, the lawsuit says.

According to the suit, Doe was in the first week of her new position when her supervisor began making unwanted sexual advances, including slapping her buttocks and other physical contact.

Doe said the captain would sexually harass her in front of coworkers and on one occasion tried to get her to go inside his home under false pretenses, which she refused.

From there, she said, the harassment escalated, and on May 17, 2014, Doe's supervisor sent her a text message with a picture of a negligee, which he said he wanted to see her wear, the suit says.

In the suit, Doe says she responded to the text with a message that she wanted to keep her relationship with the captain professional. And despite feeling like she was in a "no-win situation," Doe reported his unwanted advances to Stevens, the suit says.

According to the lawsuit, Stevens told Doe not to talk about the alleged harassment with anyone and once again transferred her to another position, "sparing her harasser from any discipline."

A trained engineer and 17-year veteran with the department, Doe was "relegated to clerical duties and tucked out of the way."

Several months later, Doe was granted another transfer to a new station.

"Excited for a fresh start," Doe shared her past experiences with her new team.

"Little did she know that some of her new coworkers would use that information to their advantage against her," the suit says.

Doe's new supervisor, began harassing her, knowing "he would get away with it just like" the previous captain, the affidavit claims.

According to Doe, the second captain's unwanted sexual advancements went beyond work. He showed up at her house despite her never giving him her address. In one instance, Doe says in the suit, the supervisor messaged her saying he knew she was home when she didn't answer the door.

Based on her previous complaints that resulted in no disciplinary action by Stevens, Doe said she felt "scared and trapped" and hesitant to report the harassment, the suit says.

In Sept. 2015, the harassment escalated into a physical assault, according to the lawsuit.

Doe says she was in the backyard of her home when the second captain showed up at her house unannounced. According to the suit, he approached Doe, telling her "this is going to happen, and it is about time" before he raped her.

The suit claims Lomerson then told her not to tell anyone about the assault and "started to tone down his language and treatment of her."

The suit says Doe began to feel "less pressure" after she was given a private room at the station.

However, the room soon became the site of another assault, according to the affidavit.

After a transfer to Doe's station, a battalion chief became another one of her abusers, the suit claims.

Having met one another before, the battalion chief told Doe he transferred to her station "to be near her," the former firefighter says in the lawsuit.

Once again, she said, she rejected the advances. But according to the suit, the man sent Doe sexually inappropriate text messages from 2016 to 2017 and used "his position of power" to keep her silent.

Doe said he also showed up at her house unannounced, and in late 2017 raped her in her private room at the station, the suit says.

"Don't do this to me," the suit says Doe told the man.

Doe said she didn't make a report because "she knew her job was in jeopardy."

Months later, she said the battalion chief raped her again in his room at the station after locking her inside, the suit says.

He "continued to state that there would be consequences if Jane Doe reported what he had done to her," the affidavit says. "She kept telling herself that if she could tolerate it just a bit longer, she could retire with the security of a full pension, she could work to build a better future for her daughter, and her nightmare would be over."

The suit says the department's fraternity environment "emboldened" other firefighters to harass Doe.

According to the suit, her immediate supervisor touched himself and masturbated in her presence on several occasions at the fire station.

In another instance, Doe's daughter was visiting her at the station when a fellow firefighter slapped her buttocks so hard it left a red mark, which she documented in a photo included in the suit.

Doe says when she sent the photo to the lieutenant to report the firefighter, he sent the image back to her with kissing face and OK hand sign emojis placed over the image.

The lieutenant "thought the assault of Jane Doe was a game—to be clear, this was her immediate supervisor in the chain of command," the suit says.

According to the lawsuit, Doe reported to the Fort Worth Fire Department that she was diagnosed with epilepsy after her second transfer in 2013.

Her condition, the lawsuit says, worsened with her stress on the job.

In Dec. 2017 while off duty, Doe was involved in a car crash after going into an epileptic seizure, the lawsuit says.

A Fort Worth fire captain reported the crash and her epileptic condition to internal affairs and Doe was taken off duty.

"Ultimately, due to the stress, anxiety, and shame she had been under for the past five years of her life at the FWFD, Jane Doe was forced into an early medical retirement on July 31, 2018," the suit says. "Jane Doe did so against her will. She was denied her full pension."

As Doe seeks monetary damages, both the Fort Worth police and fire departments say they're investigating the allegations.

"We will continue to investigate these allegations and cooperate fully with the police investigation. Since this remains an active investigation, we will have no further comment at this time," Fort Worth Fire Department officials said in a written statement.

"The complaint was forwarded to us by the Fire Department on behalf of their employee," Fort Worth police officials said. "A detective with our Sex Crimes Unit made several attempts to speak with the potential complainant."