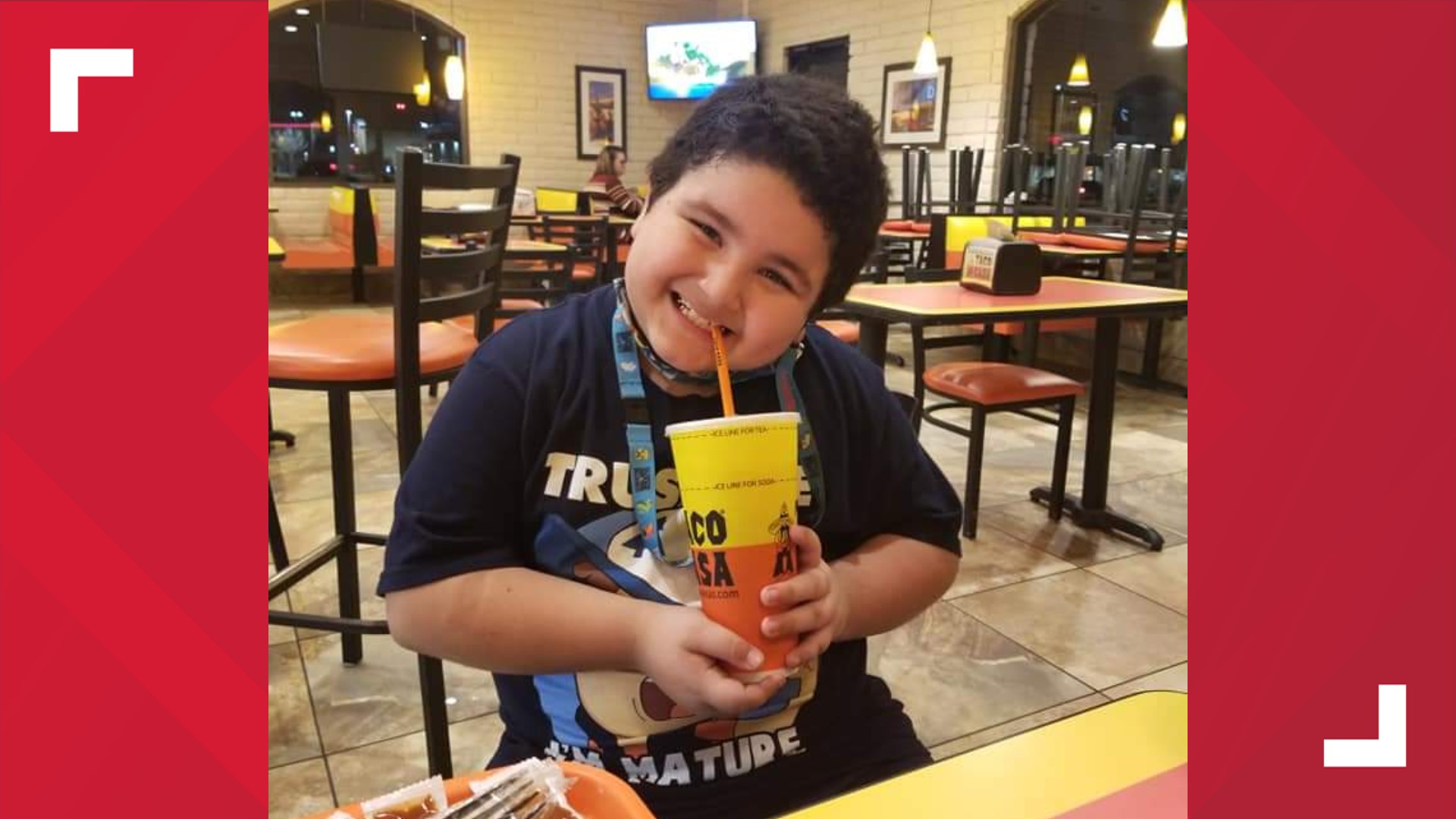 DALLAS — Note: This story has been updated to clarify that the deaths of two children in Tarrant County were reported on consecutive days, not that the children died within that time frame. A clarification was also added after WFAA learned the child highlighted in this story did not have asthma.

A 9-year-old Vernon boy died of complications of COVID-19 early Tuesday morning at Cook Children's Hospital in Fort Worth, his family said.

J.J. Boatman was identified by the Tarrant County Medical Examiner. He had just turned 9 earlier this month, according to information found on a GoFundMe that was set up for his family.

"I can't imagine living without that boy here," Jason Boatman said. "He was just the life of this house."

On Sunday night, Boatman said that J.J. was active and alert. The father said J.J. was playing hide and seek with his family and happily watching TV.

The next morning, Boatman said he heard J.J. wheezing a bit, but said his son's health took a sudden nosedive after he left for work.

"My supervisor came and got me and said I needed to go to the ER because of J.J.," Boatman said.

"My wife told me that he was purple, blue, and screaming that he couldn't breathe. He was yelling for help."

Boatman said that J.J. was rushed to an area hospital in Vernon, where he was told that doctors vigorously performed CPR on J.J. to keep him alive.

The decision to fly him to Cook Children's was quickly made and J.J. was in Fort Worth by Monday afternoon.

Boatman and his wife made the drive as soon as their son was in the air.

"That drive was a nightmare," Boatman said. "It was the longest drive of my life."

Once Boatman and his wife arrived in Fort Worth, they said that doctors within Cook Children's told them that J.J.'s lungs were filled with fluid and that his brain was swollen due to lack of oxygen.

It was also likely that J.J. was brain-dead, Boatman told WFAA after speaking with doctors.

Again, Boatman couldn't believe what he was hearing. His son had no symptoms the day before and the family is unaware of any underlying medical conditions.

Earlier reports said that J.J. had asthma, but a family member admitted that they misspoke.

Boatman did say that his son suffered from ADHD and that the boy took medication to help him sleep.

By Tuesday morning, J.J. had died.

Credit: Boatman Family
J.J. Boatman (left) holds up his birthday cake with his father Jason next to him.

"The nurse came in Tuesday morning and told me that his heart was failing, and that's what happened," Boatman said. "The hardest part was coming home, unlocking the door, and seeing all of his stuff in the living room."

J.J.'s death was the second of a child reported in as many days in Tarrant County.

On Tuesday, Tarrant County Public Health reported 29 new victims of COVID-19, one of whom was a boy less than 1 year old.

The Tarrant County child reported dead Tuesday is the youngest victim county officials have reported since the pandemic began.

RELATED: COVID-19 updates Jan. 27: Arlington man in his 30s among latest to die in Tarrant County

Across the state, 13 children ages 9 or younger have died of the coronavirus as of Jan. 22, according to Texas Department of State Health Services data. An additional 24 individuals between 10 and 19 years had died

The Tarrant County Medical Examiner has not yet released a cause of death for J.J., and his father is anxious to see what an autopsy may reveal.

An ER doctor WFAA spoke with said it's rare for a young child to be a COVID patient and to suddenly become so sick and die.

The doctor, speaking strictly on background, feared that an underlying condition may not be known to J.J.'s family.

Boatman and his wife told WFAA that they tested negative for the virus and fear that J.J. may have gotten infected at school.

Vernon ISD released a statement Tuesday on Facebook saying that Central Elementary School would be closed immediately until the end of the week due to the death of a student who had been COVID-19 positive. The statement said the student's last day on campus was Friday, Jan. 22.

The school district's medical advisor said all staff and students should quarantine until Monday, Feb. 1. Classes will resume on that day after the campus has been disinfected, the district said.

"We are heartbroken and our thoughts go out to the student's family," Vernon ISD Superintendent Jeff Byrd wrote in the statement.

The grief hasn't hit Boatman yet. His son, he said, was such a joy. Exuberant, an excellent student, and eager to learn how to skateboard as well as play tennis.

He told WFAA that he stopped by a local Target hours after J.J.'s death, the last place he remembered visiting with his son.

At the time, J.J. wanted a few toys that Boatman wasn't ready to buy.

On the trip home after his death, Boatman went and bought them out of regret.

"There's just something about being with him in that store. A person like him isn't supposed to leave us."

Credit: Boatman Family
J.J. Boatman smiles for a photo while on his trampoline.

Download our free WFAA app to stay up-to-date on all news stories in the Dallas-Fort Worth area.