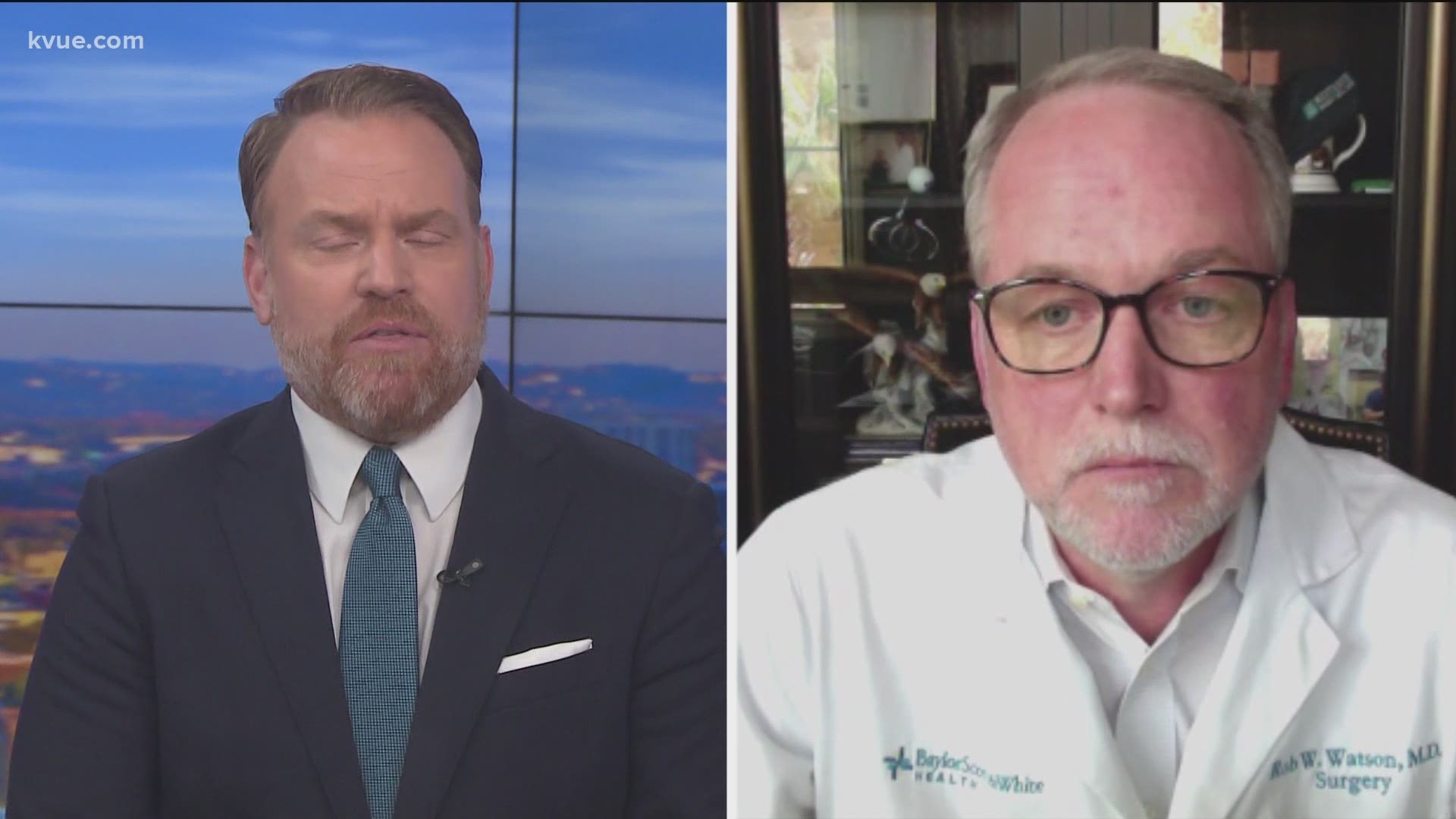 AUSTIN, Texas — As COVID-19 cases are beginning to rise in the Austin-Round Rock area, several questions are being raised about the issues surrounding the delta variant and the choice to be vaccinated.

Bryan Mays: Let's start with this. COVID cases are on the rise once again here in Central Texas. What concerns you most about the delta variant and the current case numbers?

Dr. Rob Watson: So the things we know about the delta variant, it's 60% more transmissible than the alpha variant, which was the most dominant variant back in April. And that variant was 50% more transmissible than prior strains. So we're dealing with a highly infectious strain of the coronavirus and we're seeing case numbers go up as a result of that ability to spread.

Bryan Mays: Seems like they're going up quicker than we saw at this time last year. Is that the case?

Dr. Rob Watson: Absolutely. So we can say that we're seeing, just the last few weeks, a three- to fivefold increase in the number of cases, both in terms of testing positivity, and then that's resulting in a portion of those cases ending up in our hospitals.

Dr. Rob Watson: We are, but I think this is a bright spot here where we know already from the incidents that delta virus or delta strain and the other countries that get the vaccines are still very effective. So we are seeing some breakthrough cases. If you look at the statistics on the effectiveness of the vaccines, none of them were ever touted to be 100% effective. So it is still seeing a few breakthrough cases. But overall, the number of cases are small and where we're seeing the most impact is in our unvaccinated population. And then the second thing I'll say, even in those cases that we are seeing breakthroughs, we're seeing a less severe form of the delta virus. So those patients are mostly not ending up in the hospital and are not ending up with severe illness, where that's not true in the unvaccinated population.

Bryan Mays: So what is your advice to those who have not been or have chosen not to be vaccinated?

Dr. Rob Watson: So a couple of things. But first and foremost, I would say, please go get vaccinated. We have plenty of supply to be able to vaccinate those that are interested. All of the health systems within the greater Austin area are able to vaccinate you and can get that done quickly. It requires, in most cases, two doses of the vaccine depending on the manufacturer. So you've got to get that first dose and you've got to get the second dose. So it does take time, even with the vaccine, to develop immunity. Second, as you know, we've moved to Stage Three. So we were not in Stage Three. We were at Stage Two for the last two months. But because of the increase in cases we've seen a move to Stage Three. That means if you're partially vaccinated or unvaccinated and you're high risk now, you need to really start to restrict your activities. So you shouldn't be going out to social gatherings, you shouldn't be traveling unless it's essential. So you're going back to a time where you need to restrict your activities, whereas before you were able to move about with a mask, again, with a mask, always even in Stage Two. But you're really going to need to limit your activities because the spread is becoming so much more prevalent.

Bryan Mays: Finally doctor, school is just a few weeks away. Of course, young children are not able to be vaccinated at this point. What's your advice to parents as their concern may be rising now with school just around the corner?

Dr. Rob Watson: Sure. I think that for those that are in the 12-and-over population, again, the message is the same. Please go get vaccinated. It takes a month to get your vaccine and then some time on the other side of that to develop your immunity, but you still have time ahead of school starting for that population that's eligible to get vaccinated. For our younger kids, we're hopeful that the vaccine will become available in the near future. But until that time, we should take certain protections throughout the summer just to protect all of our vulnerable populations. And I would put our children in that population.

What Stage 3 means for masking in Austin