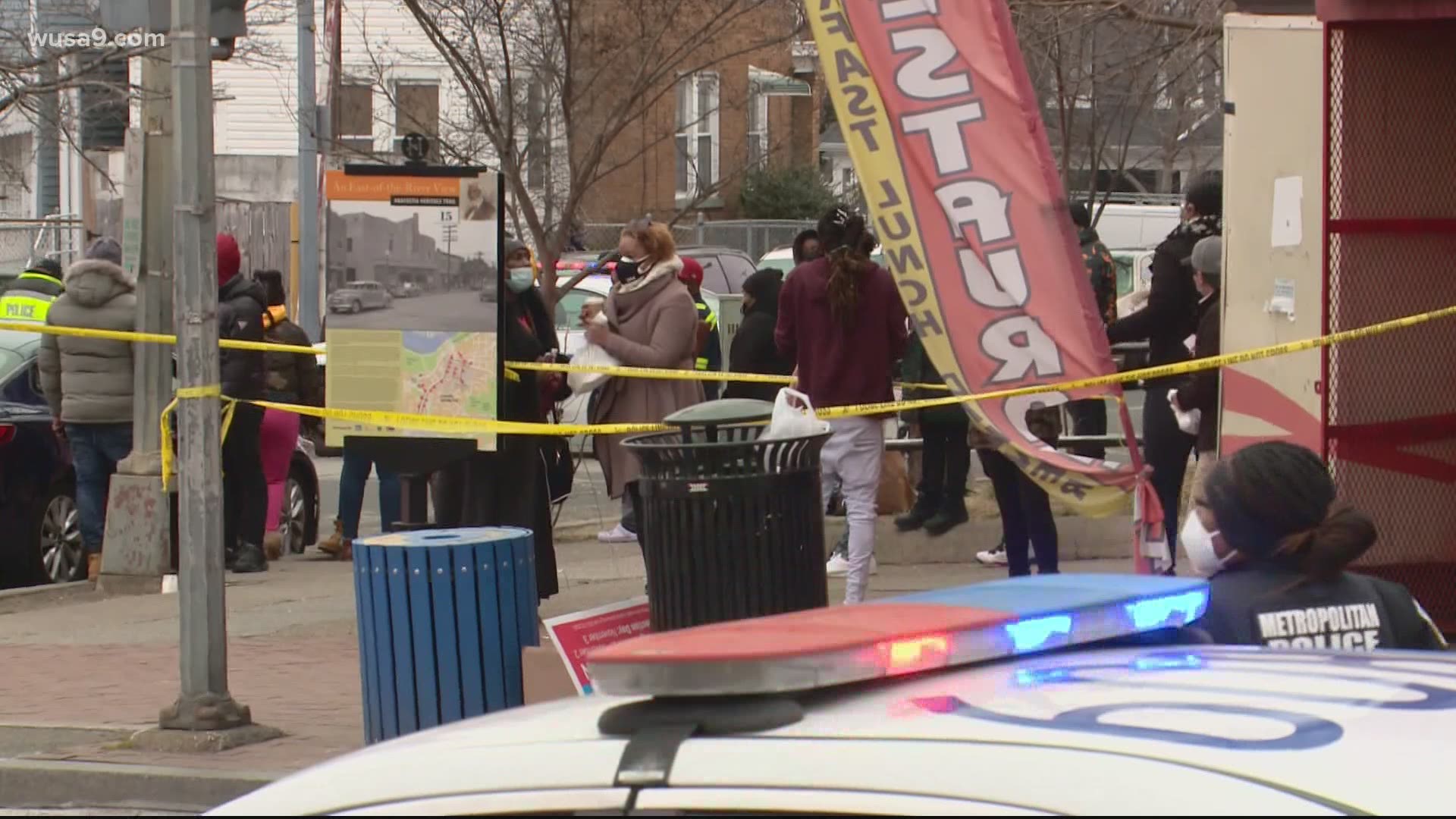 WASHINGTON — As the coronavirus pandemic continues to ravage communities, D.C. activists are facing another crisis -- violence -- which they say seems to only have gotten worse.

Monday morning, 22-year-old D.C. native and college student Edward Wade was shot to death inside the New 7 Market on the 1400 block of Good Hope Road, Southeast. D.C. Police said four others were injured both inside and outside the food market.

Wade's death marks the twelfth homicide in D.C. so far this year -- on pace with 2020's rate at this time last year, according to police data. And, last year the District saw the highest homicide numbers in 16 years.

Community activist, like Clayton Rosenberg, said the pandemic has only exacerbated violence in D.C.

Family and friends said Wade was a senior at Virginia Union University in Richmond, where he was studying biology. They said his mom had dropped him off at the store to buy a few items when he was killed -- with her waiting in the car outside.

“She did everything a mother could do, and now she’s in the car and sees her son get killed. I mean can you imagine?" Ronald Moten, a former mentor of Wade's and community activist, said. "No one should have to go through this. Nobody.”

But he said the problem starts with normalizing these tragedies, which happen far too often.

“When we live in a society when this behavior is acceptable, we become so numb that this is not a big issue, then we’re in trouble," Moten said. "This can not be acceptable when young black men and women are gunned down in our community."

Credit: Ronald Moten
Ronald Moten poses with two of his mentees, one of whom (Edward Wade - left), was shot to death inside a southeast DC market Monday.

Rosenberg serves as the Chief of Staff for the Alliance of Concerned Men, where he's worked to mentor young people and help eradicate violence for years.

“We have to exercise their mind," he said. "We have to give them the conflict resolution and let them know there’s always another way.”

He said the Alliance holds weekly zoom sessions with teens, where they develop projects to improve the community together. He said his mentees are excited to go out into the community to implement the plans once the pandemic wanes.

But he said stopping this violent trend in D.C. starts with a simple foundation: "We've got to get love back into our communities. We got to love more. If not, we going to continue to see these things occur.”

Rosenberg said community organizations like his are hurting for resources to really turn the community around. He said they've made progress -- but they can't be everywhere at once.

Moten adds that there needs to be more accountability from young people -- and making sure they get attention for doing positive contributions to society instead of "being fools."

“I just want our young people to understand that we love them, but you got to love yourselves," he said. "We cannot tolerate evil behavior like this in our community.”