A doctor with Kaiser Permanente said once they open the vials, they have to use all doses within six hours. 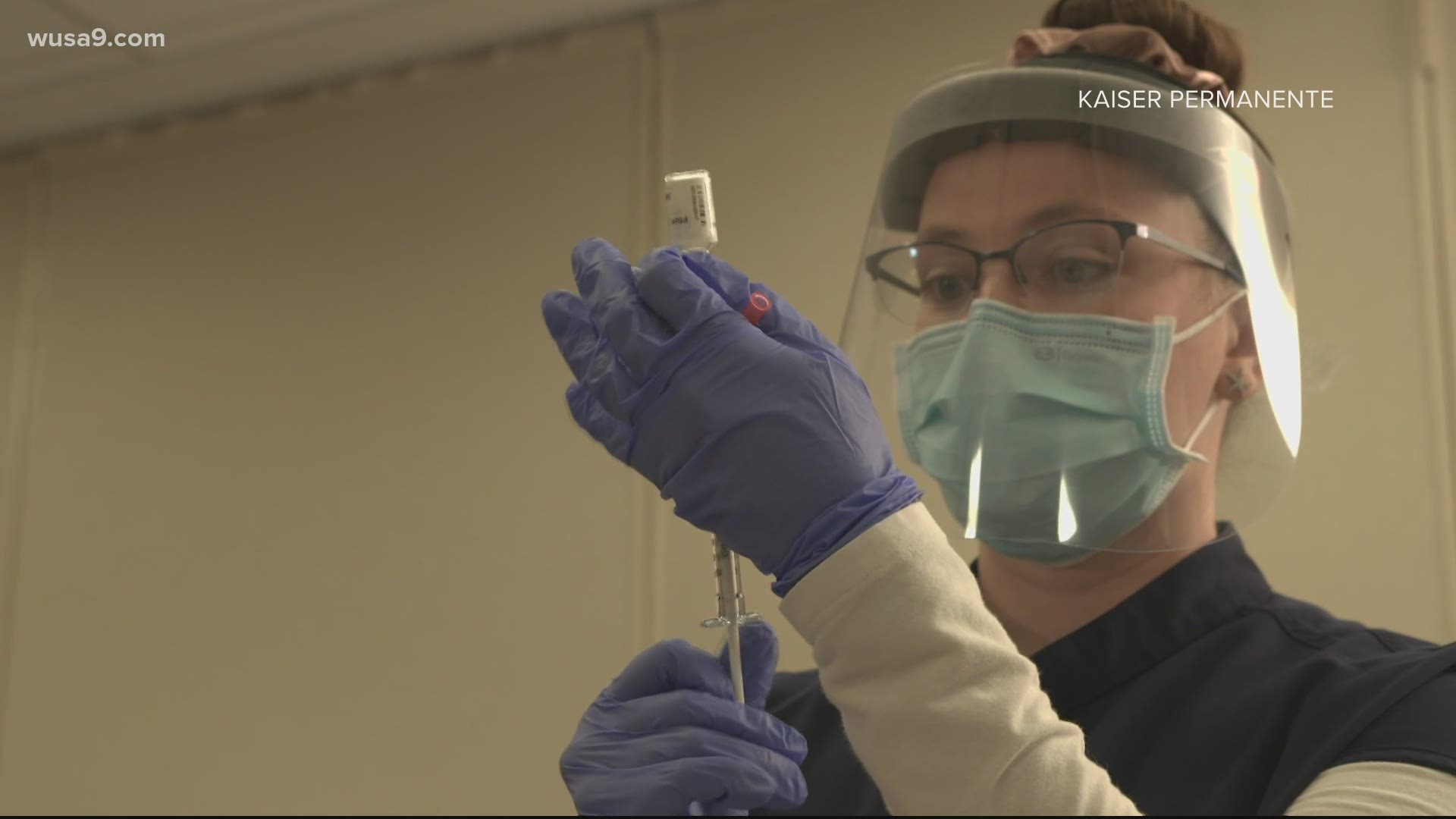 WASHINGTON — Kaiser Permanente is preparing for its first shipment of the Pfizer vaccine in D.C. as they begin a long process of vaccinating their thousands of staff and frontline workers in the District.

“It’s been just about 11 months of working pretty much 7 days a week, so we are very excited about the beginning of the end here," Dr. Mona Gahunia said. "We really think that the vaccine is the light at the end of the tunnel."

On Monday, staff members completed a simulation from delivery to administration of the vaccine at Kaiser Permanente's Capitol Hill Medical Center, so they're ready for Wednesday's shipment.

Dr. Gahunia said they will be receiving 975 doses in the first delivery with plans to vaccinate on Thursday.

RELATED: Firefighters frustrated to be left out of CDC advisory panel's first round of COVID vaccine recipients

“We’ve been doing mass vaccinations for decades, so we had some infrastructure already in place," Dr. Gahunia said. "We just improved upon that to be ready for the differences that we’re seeing in these vaccines, specifically the Pfizer vaccine because it does require that ultra-cold storage. So it’s everything from the proper storage and making sure that the temperatures of the freezers are correct to having the right nursing protocols in place."

The Pfizer vaccine arrives frozen and has to be stored in an ultra-cold freezer at -60 to -80⁰C, according to a spokesperson for Kaiser Permanente. The company provided footage showing their freezers at Capitol Hill Medical Center set at -79⁰C.

Their spokesperson said the vaccine can remain frozen in storage until its expiration date, and can be stored in the refrigerator between 2⁰C and 8⁰C (36⁰F and 46⁰F) for up to 120 hours (5 days) for thawing before administration.

Once the nursing team opens the vial to reconstitute it -- part of the new training Dr. Gahunia said nurses had to undergo -- she said they must use the multi-dose within six hours.

Kaiser Permanente in the Mid-Atlantic region has 10,000 nurses, doctors, and other healthcare workers to vaccinate, so Dr. Gahunia said it will take some time to work through their entire staff -- especially considering each person requires two doses.

When it comes to deciding who receives the vaccine first, Dr. Gahunia said hospital leaders are using guidance from the CDC, ACIP, and the DC Department of Health, as well as evaluating occupational risk exposure. She said the two main factors contributing to that risk assessment are direct patient contact and contact with infectious materials.

“We’re trying as hard as possible to be really equitable in the distribution," Dr. Gahunia said. "So it’s not about being a physician or a nurse or environmental services worker. It’s about your occupational risk, and the occupational risk might actually be the same for all three of those people or it might be more for the environmental services worker."

She is hoping everyone will be willing to take the vaccine when it's available to the general public, saying, "the vaccine is only as good as people being willing to step up and get it.”

Dr. Gahunia said she's been hearing many concerns about the reported side-effects of the vaccine, but assures people that those effects are a sign the vaccine is working.

"When you experience some of those side-effects of a little bit of fatigue, headaches, a little bit of myalgia [muscle pain], that’s your immune system working," she said. "That doesn’t mean it’s not safe. And those side effects are very short-lived.”

She expects that Kaiser Permanente will receive weekly shipments of the vaccine, but said specific schedules vary in each jurisdiction.

It will take months for a vaccine to be publicly available, so in the meantime, Dr. Gahunia wants people to do four things: