On Tuesday, the agency told KVUE the nightclub had "no TABC permits whatsoever." A day later, the agency learned it did, in fact, have a food-and-beverage permit. 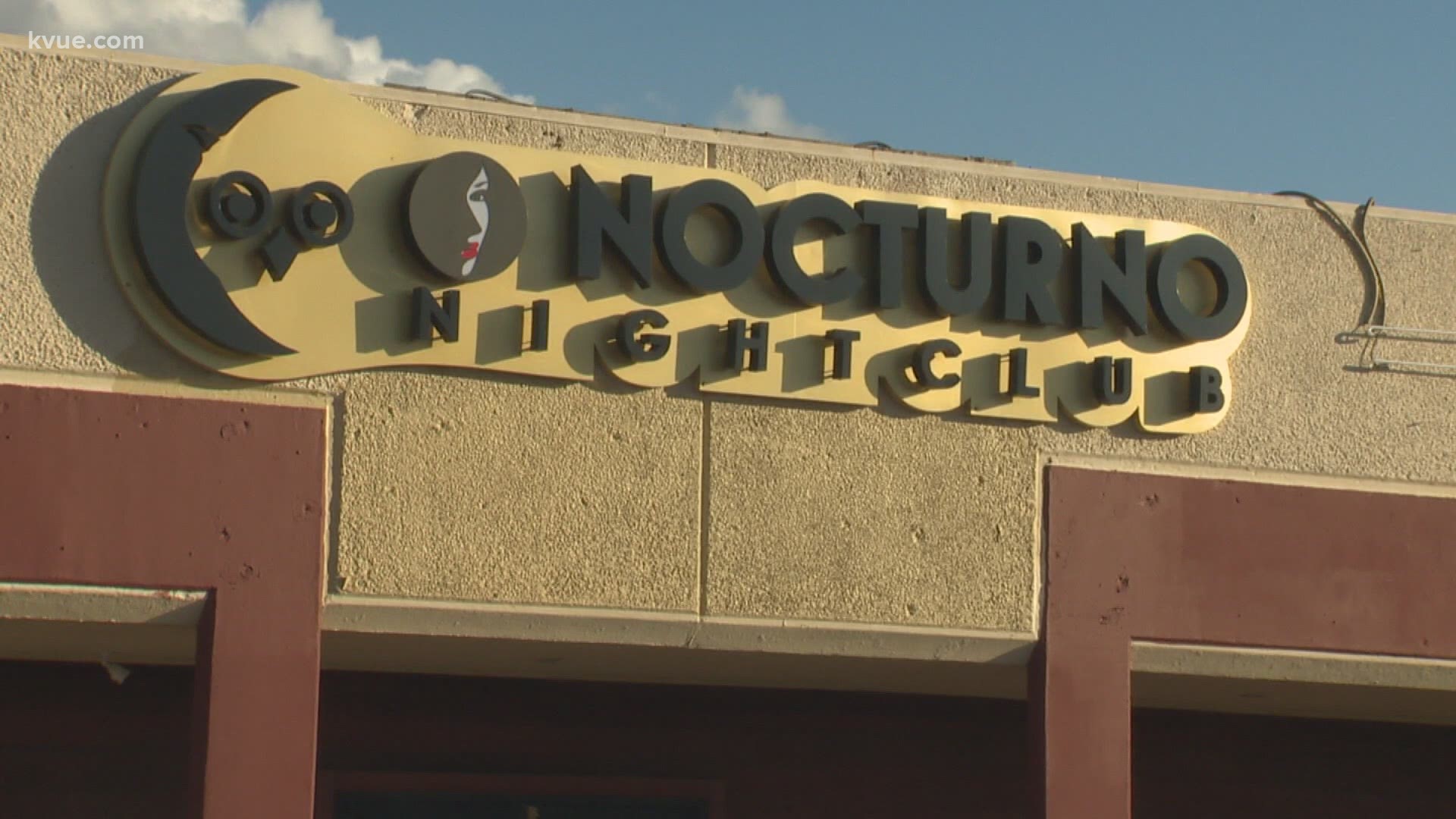 AUSTIN, Texas — Editor's note: On Tuesday, KVUE reported, based on information confirmed by the Texas Alcoholic Beverage Commission, the nightclub did not have any permit from the TABC.

However, on Wednesday, hours after the story was published and aired on TV, the TABC learned the nightclub did, in fact, have a food-and-beverage permit and was operating as a restaurant. While Travis County still prohibits bars and nightclubs from reopening, restaurants are allowed to be open at 75% capacity.

The Texas Alcoholic Beverage Commission now says a North Austin nightclub, which drew concerns after sharing videos of mask-less people dancing closely together on its Facebook page, is operating as a restaurant.

El Nocturno Nightclub on North Lamar Boulevard – which calls itself "the best Latino nightclub in Austin" – was live on Facebook early Saturday morning, hours after reopening to the public on Friday.

The nightclub has since deleted the videos after KVUE reached out for comment. Below is a screen recording of one of the videos. 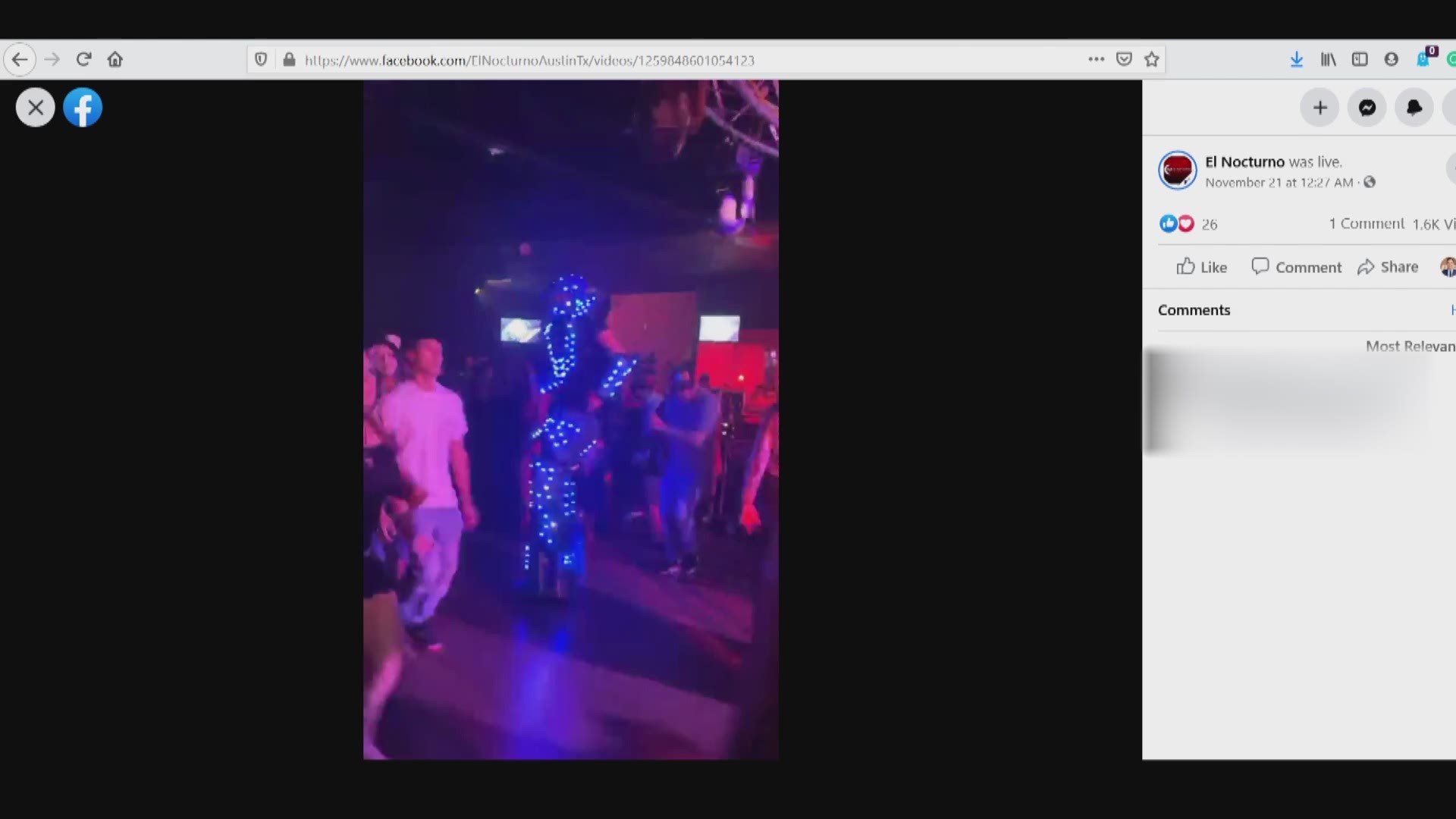 Travis County hasn't allowed bars and nightclubs to reopen, although some are now operating as restaurants thanks to food-and-beverage permits from the TABC. Restaurants are allowed to be open at 75% capacity.

On Tuesday, the nightclub told KVUE it had obtained a food-and-beverage permit. But a TABC spokesperson told KVUE Tuesday afternoon that El Nocturno "has no TABC permit whatsoever."

Without a permit, the agency couldn't investigate any COVID-19 violations.

"In the case of COVID-19 violations, the only penalty TABC can assess is to suspend the business’s permit, so if they don’t have a permit to suspend, it would fall to local health and safety officials to enforce at that level," a spokesperson said Tuesday.

On Wednesday afternoon, however, a TABC spokesperson told KVUE it had learned El Nocturno does, in fact, have a food-and-beverage permit. The agency discovered its permit was "listed under a slightly different name than what's on the sign."

"Our enforcement agents have opened a complaint and will conduct an investigation to determine if a violation has taken place," a spokesperson said on Wednesday.

RELATED: Texas shut down bars to slow the spread of coronavirus, but allowed thousands to open through a restaurant loophole

The original permit KVUE obtained had expired in February 2020. It was under the trade name of El Nocturno Sports Bar, with the owner listed as El Nocturno LLC.

This new permit was issued in August 2020, had the trade name listed as Nocturno Night Club and its owner listed as LSBG Compania Inc.

Since the nightclub now operates as a restaurant, it's allowed to remain open because of this technicality. Unlike at bars, which Gov. Greg Abbott's orders and checklist protocols require all customers to be seated, restaurants aren't required to keep customers seated. They are required, however, to wear masks when not seated and when not possible to maintain 6 feet of social distancing.

RELATED: 'We have been left to fend for ourselves' | Why is the Hispanic community getting hit harder by COVID-19 than most in Austin?

According to the City of Austin, at least seven COVID-19 violation complaints have been filed through Austin 311 since the nightclub reopened on Nov. 20. One of those is with the Austin Fire Department; the other six are with the Austin Code Department. Code inspectors haven't actually found any violations, though.

A City spokesperson told KVUE the code department's COVID-19 response hours are between 7 a.m. and 8 p.m. Code inspectors have dropped by the nightclub twice – at 7 p.m. – and found no violations.

However, the nightclub's doors don't open until two hours later, according to its Facebook page.

The City shared the following statement:

"Our COVID-19 compliance teams operate on a complaint-based system for reporting violations. Potential violators need to be observed by a compliance team member to have violated a local Order or Rule in order to be considered in violation. We do not use video footage to prosecute individuals or businesses. Additionally, it must be clear that an individual or business is violating an Order or Rule, including occupancy and masking violations. Individuals observing a violation at a business should call 311 to report the violation."

In Austin, Latinos make up nearly 50% of the city's COVID-19 deaths despite making up about a third of the population.

How to know if your mask is still effective