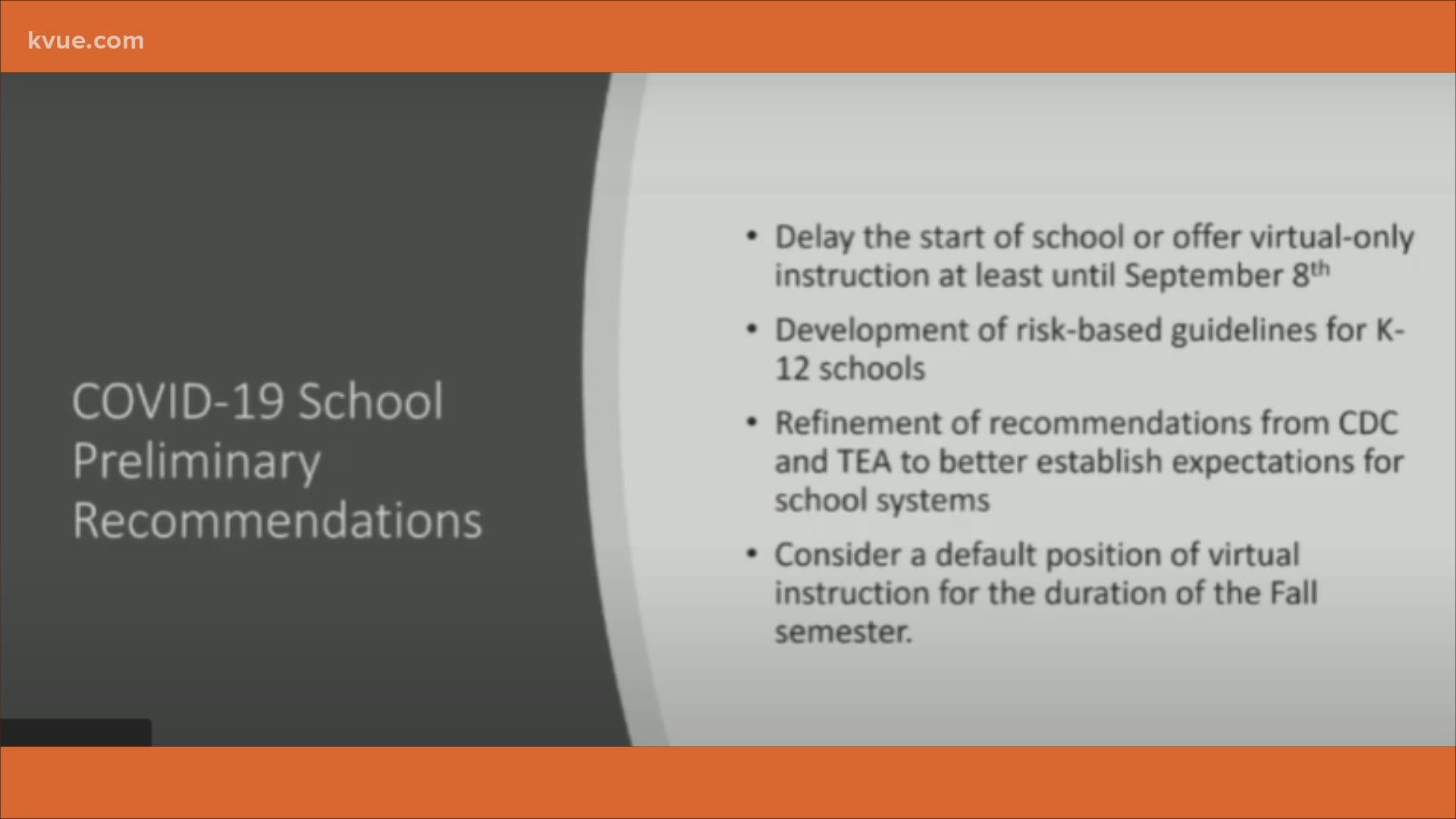 He also said that in-person classes could lead to anywhere between 40 to more than 1,300 deaths among students in Travis County alone.

"We're talking about hundreds and thousands of people when we talk about the school systems," said Escott. "When we look at students, we know that the risk of students having severe illness or death is relatively small compared to others. When we look at our data from March and April, our rate of deaths in the 10-19 age group was zero, but we have to also be aware that we had a relatively small number of cases."

Escott said when APH looks at other data sets in terms of people in this age group and the risk associated with hospitalization and death, APH has data out of China that indicates the risk of death is estimated to be 0.18%.

"This is a little bit of a challenge with the numbers because you hear 0.18% and the translation is, 'Well, my child has a 99% chance of not dying from COVID-19,'" said Escott. "The real number, because the numbers are small related to COVID-19 cases and deaths ... it's hard to be certain about the estimate of the case fatality rate."

"Unless we have a vaccine quickly, somewhere in the neighborhood of 70% of students could be infected over the course of this disease," said Escott.

Escott explained that the risk for faculty and staff is much higher. He said, "somewhere in the neighborhood of two to 10 times higher in terms of rates of death."

Commissioners Court
As a group, the commissioners and county judge are the chief policy-making and administrative branch of county government. Among their many functions, the court sets the tax rate, determines fees for many county services, and determines how the collected revenues will be distributed among different county departments to provide services to the community.

Another challenge Escott mentioned is when people, particularly staff, get sick in school.

"The practicality of social distancing in almost all of our school is in almost all or all of our schools is a challenge. Our schools are not designed for having desks six feet apart," said Escott. "All of our districts would have to triple the size of schools, triple the size of spaces in order to achieve that. So what can be done if you can't achieve that? You can build plexiglass barriers in between the desks. You can orchestrate rotations of schedules, flows of hallways, masking of students."

RELATED: Can kids get and transmit coronavirus?

Escott said those plans aren't in place right now and it would take school districts time to implement them.

"Right now at Stage 4, and certainly at Stage 5, it would be very dangerous for us to open up schools. We've seen this happen over and over and over again. Israel, South Korea, other parts of the world that opened when disease was still spreading substantially in the community, to close within a week or two weeks because of outbreaks in those schools. We've got a lot of work to do and I look forward to ongoing discussions with our superintendents and other members of the community," said Escott.