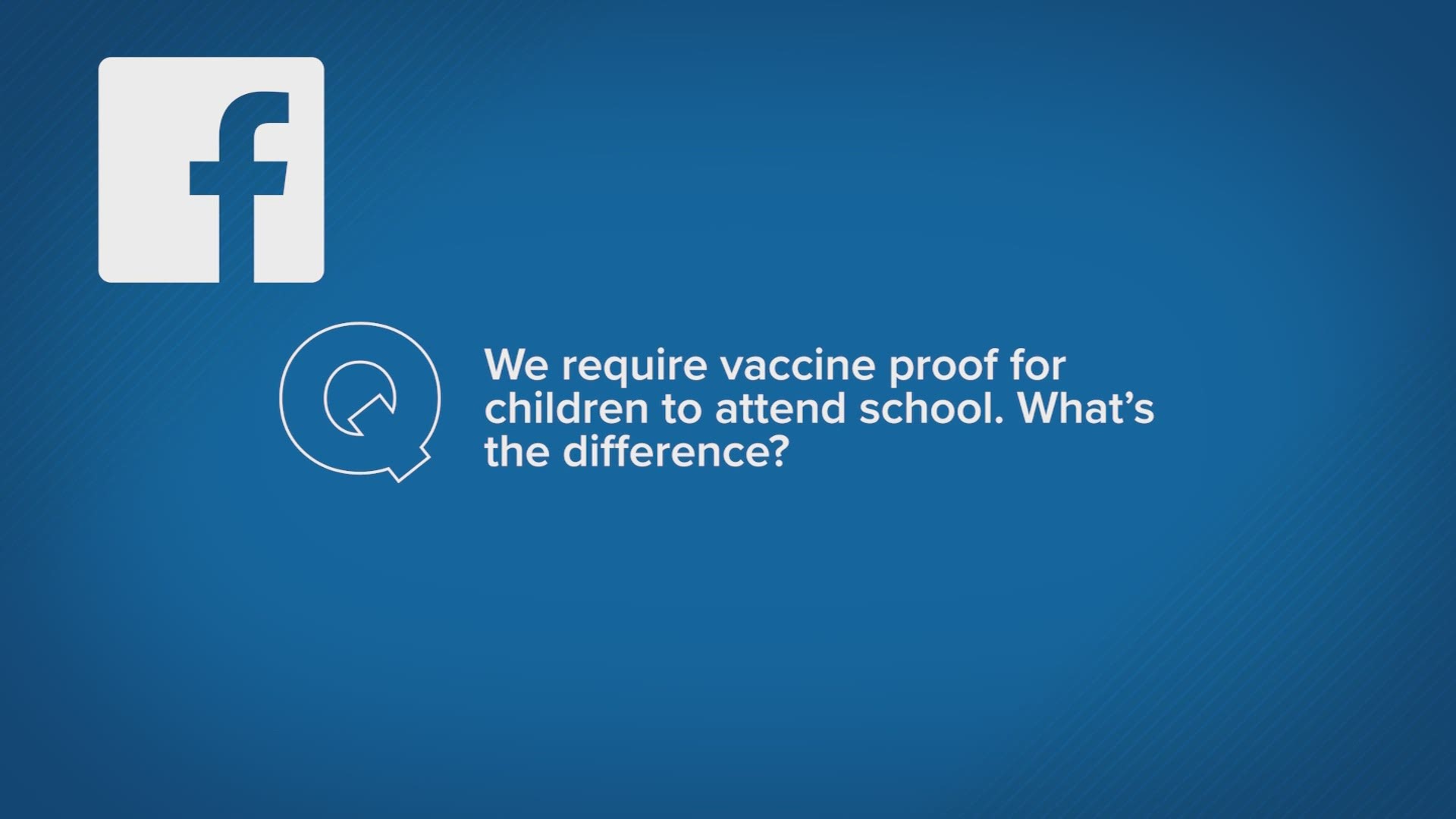 AUSTIN, Texas — Texas government agencies and political subdivisions will not be allowed to create a so-called “vaccine passport” requirement, according to a new Executive Order filed by Texas Governor Greg Abbott.

Note: the video in this story is from a March 30th broadcast about a federal vaccine passport system that is in the works

The order, dated April 5, also “prohibits organizations receiving public funds from requiring consumers to provide documentation of vaccine status in order to receive any service or enter any place.”

It goes on to say, "State agencies and political subdivisions shall not adopt or enforce any order, ordinance, policy, regulation, rule or similar measure that requires an individual to provide, as a condition or receiving any service or entering any place, documentation requiring the individual’s vaccination status for any COVID-19 vaccine administered under an emergency authorization."

"Everyday, Texans are returning to normal life as more people get the safe and effective COVID-19 vaccine. But, as I've said all along, these vaccines are always voluntary and never forced," stated Governor Abbott in a release on Tuesday morning. "Government should not require any Texan to show proof of vaccination and reveal private health information just to go about their daily lives. That is why I have issued an Executive Order that prohibits government-mandated vaccine passports in Texas. We will continue to vaccinate more Texans and protect public health — and we will do so without treading on Texans' personal freedoms."

You can read Abbott's order here in PDF format.

Vaccine passports are not new. They typically refer to a traveler’s vaccination and health records. Before COVID-19, some countries already required vaccination records, like for the disease yellow fever. More recently, there have been discussions around the country and worldwide about which countries, businesses, etc. would or would not allow someone in based on their coronavirus vaccination status.

Private businesses, entities can require a vaccine passport — but there’s a catch

Abbott’s order mostly covers Texas government agencies, but it also states “any public or private entity that is receiving or will receive public funds” also cannot require a passport. The order states that this includes grants, contracts, loans or other forms of taxpayer money going to that entity.

The governor’s announcement has a lot of you asking questions.

Ahmed on Facebook says, “We require vaccine proof for children to attend school. What’s the difference?”

First, keep in mind the COVID-19 vaccine is not authorized for anyone under 16 years old, so school-age children can’t get a shot yet unless they’re part of a clinical trial. But that could change by next school year.

KHOU11 Legal analyst Carmen Roe says Texas is a voluntary vaccine state, that’s true for all vaccines. Which means that in Texas, any parent can file an affidavit that says “for reasons of conscience or religion,” they don’t want their kid to be vaccinated.

The governor’s executive order covers government entities, so another viewer wants to know if businesses can require proof of vaccination.

KHOU11 Legal Analyst Carmen Roe says yes, but they do, under laws that are in place federal and state, require exemptions for religious reasons or medical reasons. Their failure to do that puts them at risk to be sued for firing someone unlawfully.

State leaders in Tennessee are set to introduce a bill prohibiting "vaccine passports". Republicans there say it is a form of government overreach. Other states and companies are considering creating "vaccine passports" as proof of dose ID. The bill starts off in committees on Tuesday according to Representative Jason Zachary.

Last week, Florida’s governor also issued an order regarding vaccine passports. Governor Ron DeSantis started the week by announcing his state would not implement a vaccine passport system, and by Friday, he made it official with an executive order. The order states vaccine passports “will reduce individual freedom and will harm patient privacy,” and are therefore prohibited from being distributed. It goes on to say vaccine passports would create two classes of citizens based on vaccinations for everyday activities such as eating at a restaurant or going to the movies. The governor’s order applies to all government agencies and entities, but it doesn’t stop there. It also says that businesses won’t be allowed to require proof of vaccination from customers to enter or receive service. However, COVID-19 screenings can still take place as long as they fit within the parameters of the law.

Meanwhile, some other states and the federal government are said to be implementing and encouraging a vaccine passport system. Read more about that here.

WBIR and WTSP contributed to this story

Also watch: No, a vaccine passport does not violate HIPAA