This year's march will focus on supporting women's voting rights while providing participants numerous safeguards to prevent the spread of the coronavirus. 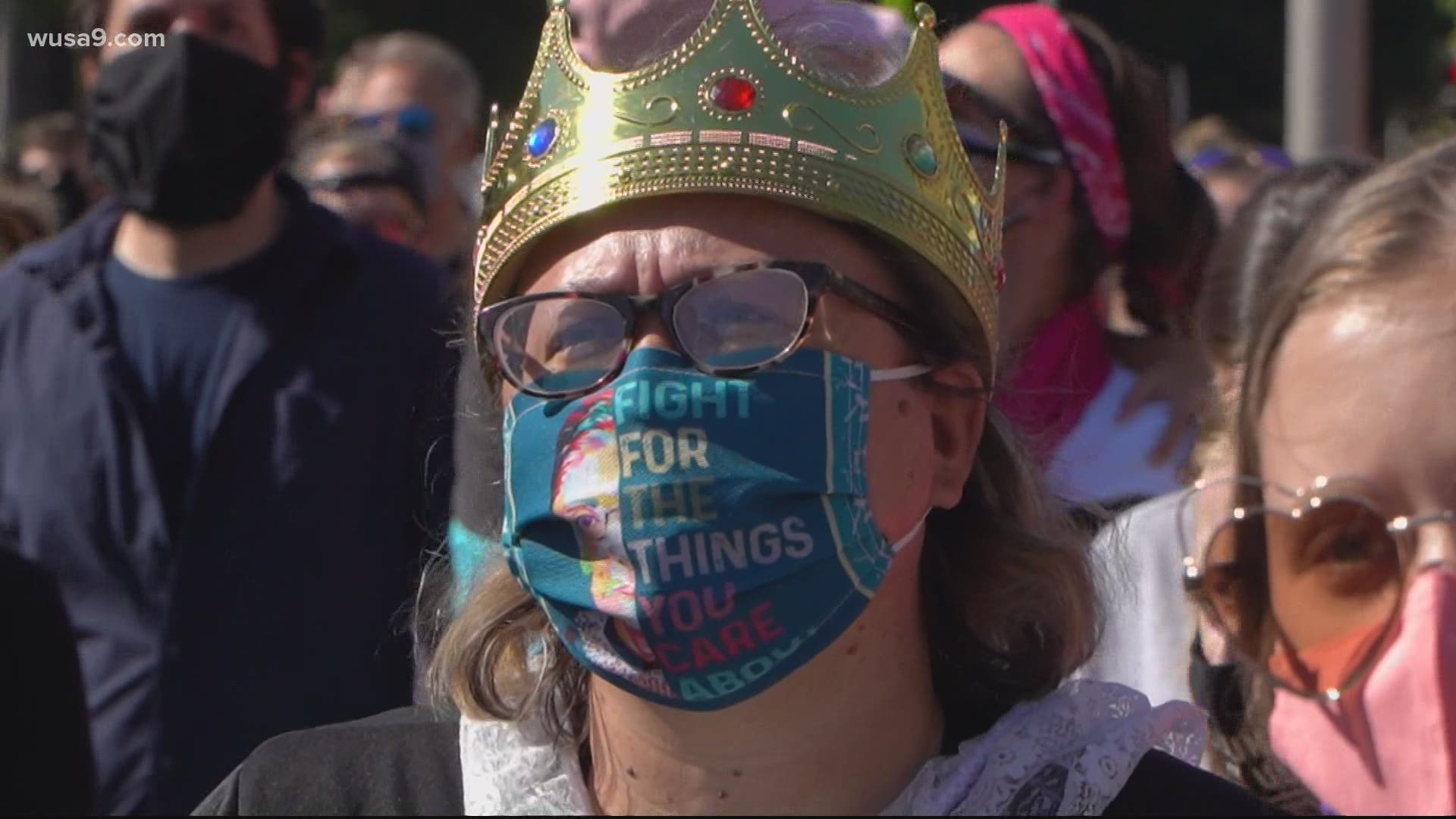 Participants in the Women's March began gathering early Saturday at Freedom Plaza in Washington D.C. Some holding signs and others dressed in costume, all were there to make their voices heard despite the coronavirus pandemic.

The march plans to focus on supporting voting rights, with an emphasis on women. It will also protest President Donald Trump's nomination of Judge Amy Coney Barrett to the Supreme Court during an election year.

“The whole point of the march, this year, is to really build and mobilize the political power of women," Women's March Executive Director Rachel O'Leary Carmona said. "And, so, we want women contacting women and we want women voting. And, we think that this election is going to be decided by women.”

A permit, recently approved by the National Park Service, shows organizers expect anywhere from 6,000 to 10,000 people to attend the event.

Those in attendance who had marched in previous years said there was a notable size difference in the crowd, but the importance of the message was heightened.

“The first one was about numbers and we are here," Jenny Harlett said. "This one is about urgency and making sure that we end this current situation. It's so urgent to get the numbers out in the next two and a half weeks, that's what I think this one, this one is about.”

As the focus of the march was on the election and the Supreme Court nomination, many of the people in attendance celebrated RBG's legacy by wearing masks, holding RBG signs, and dressing up as the infamous Supreme Court Justice.

“The honorable thing to respect her wishes for us to be able to have her justice replaced in her seat after the election, as was done with Scalia," Shannon Trey who was dressed as Ruth Bader Ginsburg said. "So I wanted to be out here today, and show that she needs to still be heard and that our voices as people, not just as women, but the American people need to be heard."

Participants marched from Freedom Plaza on Pennsylvania Avenue to the U.S. Capitol and U.S. Supreme Court.

Seeing A LOT of #RBG signs and outfits at the #WomensMarch2020 @wusa9 pic.twitter.com/I98tbQiyuR

The march wrapped up on the National Mall between 7th and 9th streets. At that location, participants participated in a “Text-a-thon." The texting action, which will also have a virtual component, is meant to energize women voters, according to Carmona.

"We're going to be making contact with five million women voters over the course of the day," she said.

This weekend, march with us from anywhere. Over 380 sister marches have been organized across all 50 states, including socially distanced in-person and virtual events.

1 / 19
WUSA9
Costumes, signs, dogs, masks and hand sanitizer have all made an appearance at the 2020 Women's March

Women’s March organizers plan to set up LED screens along the march route that will provide information about social distancing, mask usage and hand sanitizing.

“We're going to help people keep their distance and we have volunteers that will be moving through the crowd to make sure that we're not on top of each other,” Carmona said.

Something that’s new this #WomensMarch2020 - masks and hand sanitizer.@wusa9 pic.twitter.com/IEoo3t7Eyg

The march’s permit says everyone who attends the event will be required to wear masks. Approximately 6,500 masks will be available to distribute to participants who request them, for free, while 40 hand-sanitizing stations will be set up as well.

Carmona said she expects more than 500 sister marches to take place around the country this year.

“If you don't feel comfortable, or you're not able to march, there are virtual events," she added.

NOTE: The Women's March is expected to cause street closures throughout the day of the event:

The following streets will be posted as Emergency No Parking from approximately 6 a.m. to 6 p.m.:

The following streets will be closed to vehicular traffic for the event from approximately 9 a.m. to 2 p.m.:

Drivers should expect intermittent closures in the following areas from approximately 12 p.m. to 3 p.m. The decision to close any roadway will be based on safety in the general area.

RELATED: Women's March 2020: Here's what you need to know about the socially distanced event

RELATED: Women's March 2020: A history of fighting for change