Liana bent down and pulled Gracie to her feet, then supported her weight as the competitors crossed the finish line together.

WINDOM, Minn. – From first grade to the walk across a high school stage, students are taught to follow the rules.

Gracie Bucher is glad one student knew when to break them.

“She was definitely a miracle for me,” says the Windom 8th grader, still marveling at the 12th grader from another school who came to her rescue at the section cross country meet - and in doing so was disqualified herself.

“There’s nothing better than that,” says Gracie. “She was like my angel that day.”

Gracie was determined to qualify for the state cross country meet as she started the section race in Luverne.

As a 7th grader, Gracie finished just two places back from qualifying for state.

Windom 8th grader Gracie Bucher was diagnosed with mononucleosis after collapsing at a cross country race&nbsp;

Yet there she was, early in the race, her legs feeling heavy and her chest tightening.

“I realized I was falling behind. ‘I’m not wanting this hard enough, I have to keep fighting for it,'” Gracie told herself.

But as Gracie approached the finish line, she staggered and fell face forward to the ground.

Gracie’s mother watched it all, separated from her daughter by a rope and a row of spectators. "Excruciating" is how Missy Kuntz describes it.

The admonitions were correct based on the rules. Under rules enforced by the Minnesota State High School League, one runner assisting another runner is grounds for disqualification for both.

Until Gracie’s “angel” had seen enough.

Liana Blomgren, a former state qualifier from Mountain Lake High School, was approaching the finish line when she saw Gracie stagger and fall.

“I knew she wasn’t going to get to the finish line by herself and I knew that she needed somebody and nobody else was there for her,” Liana says.

Liana bent down and pulled Gracie to her feet, then supported her weight as the competitors crossed the finish line together.

Gracie doesn’t remember much about the end of her race, but will never forget Liana telling her, “You’re with me, I’ve got you.”

For her act of sportsmanship, Liana was disqualified. The rules are the rules.

Gracie, also disqualified, was taken by her parents to the hospital emergency room. She was diagnosed with mononucleosis, which explained her fatigue and collapse.

Kyle Blomgren, Liana’s dad and coach, believes his daughter did what others should have. “I don’t believe there’s another sport where an athlete would be allowed on the field in that condition,” Kyle said. “And it took an 18-year-old girl to step in and help.”

A humble rescuer, Liana says she was certain by the time she spotted Gracie that she was not going to advance to state. Still, as Gracie points out, Liana’s decision to stop and help led to her disqualification from her last high school race.

“Knowing that she would do that, especially her senior year in her last race, it just means everything,” says Gracie.

The night of the race Gracie’s mom thanked Liana in a Facebook message. Liana read it and started crying. Liana’s emotions were tested again the next day when flowers arrived in the Mountain Lake high school office with a card that read, “Thank you for being my angel.”

A few weeks later, the runners hugged as Gracie presented Liana with balloons, a stuffed animal and a Dairy Queen gift card, “because I DQ'd her. I figure I better do it again,” smiled Gracie.

Gracie’s mother says Liana’s response to her daughter’s falls had to be instinctual.

“She didn’t stop and look to somebody or listen to the people that were saying ‘Don’t touch her, don’t touch her.’ She knew she saw somebody in trouble and she made that decision to help her.,” Kuntz said.

Due in part to previous incidents like Gracie’s, the national organization overseeing high school athletics recently changed the rules. Starting in 2017, a runner who stops to assist a competitor will not be disqualified, so long as a medical care provider is not available. The Minnesota State High School League has adopted the same rule change starting next season.

Too late for Liana, but she’s already made peace with her disqualification. 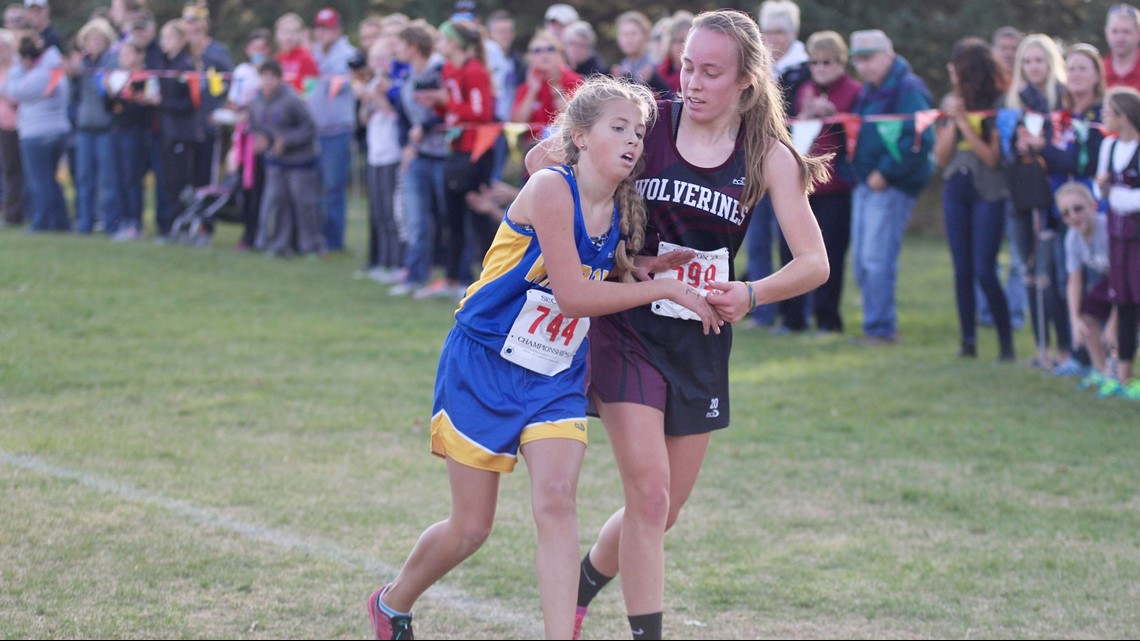