"They were just stored in here, in this potato chip can for decades." Now, those letters unsealed for the first time by Melissa Swan and her family. 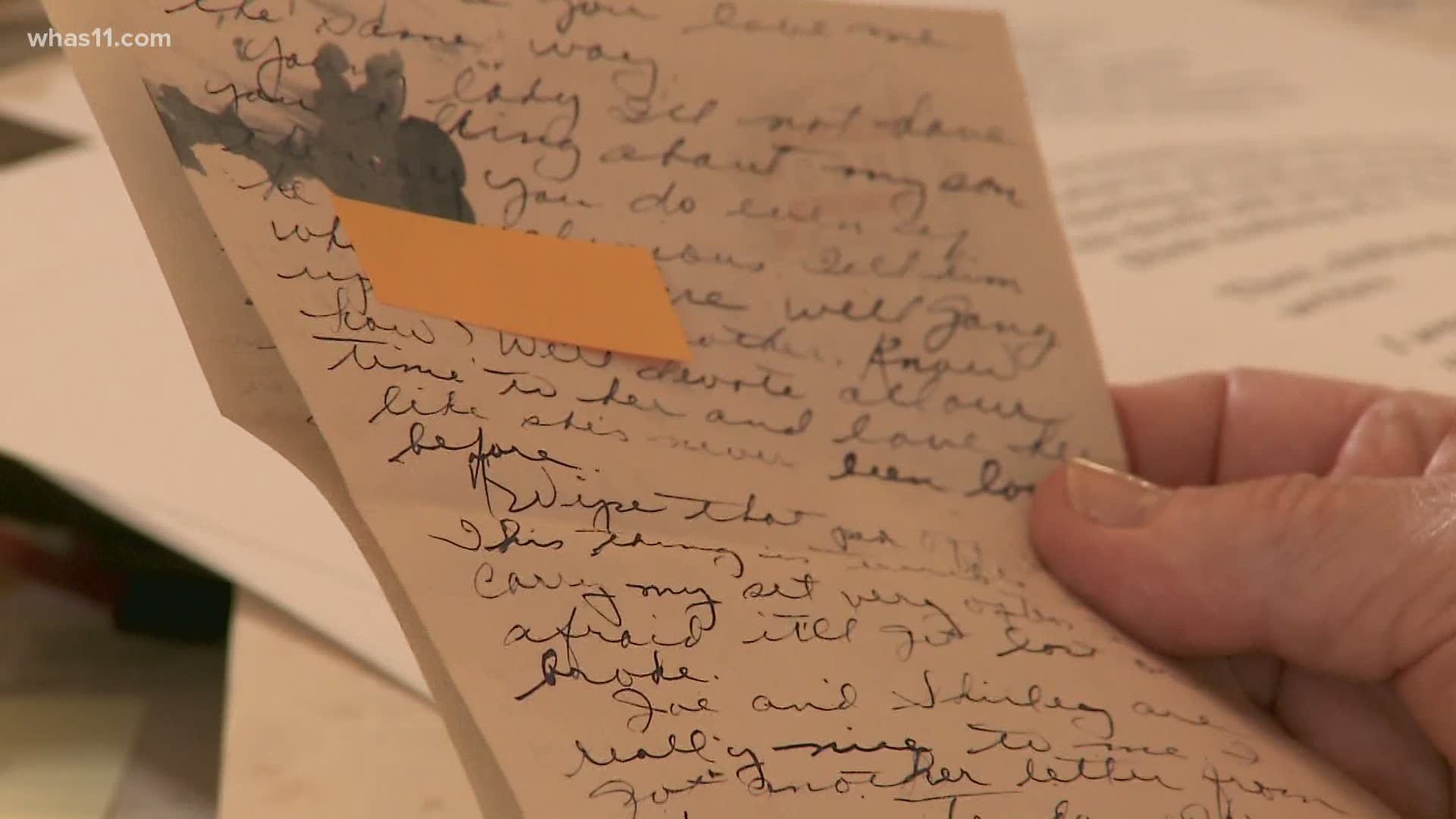 LOUISVILLE, Ky. — It’s no secret, stories from the greatest generation are fading with each passing day. Of the 16 million Americans who served in World War II, only 300,000 are left.

Some of their stories are documented in film, others in museums. That wasn't the case for Melissa Swan’s parents, Sam and Mary Swan.

"They were just stored in here, in this potato chip can for decades," Swan said.

She lifted the red lid of a rusted Gordon's Fresh Potato Chip canister to reveal more than a hundred letters from the mid-1940s, that, until recently, had been covered in dust.

Untouched for 75 years, many of the pages were faded.

"My dad was a soldier in the Army," Swan said.

Sam and Mary were inseparable until the war tore them apart in 1944. Sam was 22. Mary was 19 and pregnant with their first child. He was stationed in Fort Benjamin, Fort Oregon and then Camp Fannin before heading overseas.

"He started as a cook in the Philippines when he got there, but soon, the battles on the islands, everybody was in battle," said Swan. "Units went up in the hills and caves in the Philippines and threw in explosives or flame throwers to flush the Japanese out."

"This one talks about the D-Day invasion," she said holding one of the letters, marked with colorful Post-its noting the contents inside.

More than a thousand handwritten pages revealed a history far greater than the one Melissa had known when her parents were living. They died just 5 months apart in 2017.

"We’d never read them," recalled Swan. "At family gatherings, we’d say, 'Let’s get the letters out. Let’s read the letters.' And she’d say, 'Oh, they’re redacted. They’re boring. You don’t want to do that.'"

Their contents stayed secret until this year, when Swan decided it had been long enough.

Credit: WHAS
More than a hundred love letters from WWII were stored inside this Gordon's canister for 70 years.

"They weren’t boring," said Swan. "They were just intensely personal. As much as they are a love story, they’re also a history lesson, a fabulous history lesson. They talk about what’s going on, on the radio. The songs they’re listening to."

Their favorite song of the time: "Moonlight Becomes You" by Bing Crosby.

"At one point, my mother says, I just went to see Mickie Rooney in his last movie before he goes off to war. It was National Velvet, a horse racing movie, she writes to my dad," Swan said.

Their letters would be delayed for weeks at a time.

"One day, he writes, I got 16 letters today. And he’s so happy, because the letter before that was, what am I, the forgotten man?"  Swan said.

It was the beginning of what would be a 73-year marriage.

“If they wanted to be suggestive, he’d say, you know what I mean, wink wink," laughed Swan. "It’s almost like they‘re talking to us. I can hear our dad’s voice in the way these things are written. I can hear our mother’s voice in the things she has written. The way he teases her, the way she scolds him. All of that still goes on, even though they’re thousands of miles away and could be gone tomorrow."

At times, the couple had nothing, not even a dollar.

"Literally, he asked her at one point for three dollars," said Swan. "At another point, she said, 'I didn’t need all the money you sent me, so I’m sending a dollar back.' I mean, a dollar bill. That’s what takes my breath away."

Comparing their struggles with today's, Swan says we have no idea.

"There are a lot of parallels with this pandemic, with women working as they were during World War II. Mothers had to find childcare. If that fell apart, their job fell apart," she said.

Sam and Mary spent two years apart, never knowing when it all would end.

Just got the news that President Roosevelt had died and knowing how you feel about him, I thought I should send a letter. Right now, that’s the talk of the G.I.s. Most of us thought nobody else in the entire world was like him, the same as you do. We all know he was a great guy, a grand person and will go down in history as not one of the greatest presidents we have ever had but as the greatest..."

Toward the end of his service, Sam suffered from bleeding ulcers. Doctors doubted he’d ever make it home.

"You’ll see the Red Cross stationery he wrote on from the hospital," she pointed out. "They write letters, October: I’m sure I’ll be home for Christmas. -- November: well, it doesn’t look like it’ll be Christmas this year."

"Somedays, I’d just have to walk away," said Swan. "You always grieve after losing parents. Reading these letters just brought them back to life."

Swan says they also give her a greater appreciation for military families today.

"In World War II, everyone was a military family. Everyone was touched by the war in some way. Now, it’s different. We’re not all touched," Swan said.

The last letter in the pile was nothing short of heartbreaking.

I figured it out yesterday and finally have concluded that nothing short of a miracle will get me home before February. Sort of disheartening isn’t it? I guess I was merely stargazing before. Even though I can’t be home for Christmas, do me a favor and pretend I’m there with you. I will be in my dreams. That’s next best.

Sam came home to Mary in early 1946. Together, they had 6 children, putting all of them through college, leading to professional careers.

"They made a wonderful life for themselves," Swan said.

However, Swan will tell you their love story wasn't unique.

"Our story is unique because we have the letters," she said.

You can read more about Swan's experience with the letters by visiting the Frazier History Museum's Virtual Museum.