A Sunday morning shooting on the northeast side of Indianapolis left multiple people dead, including a pregnant woman and her unborn child. 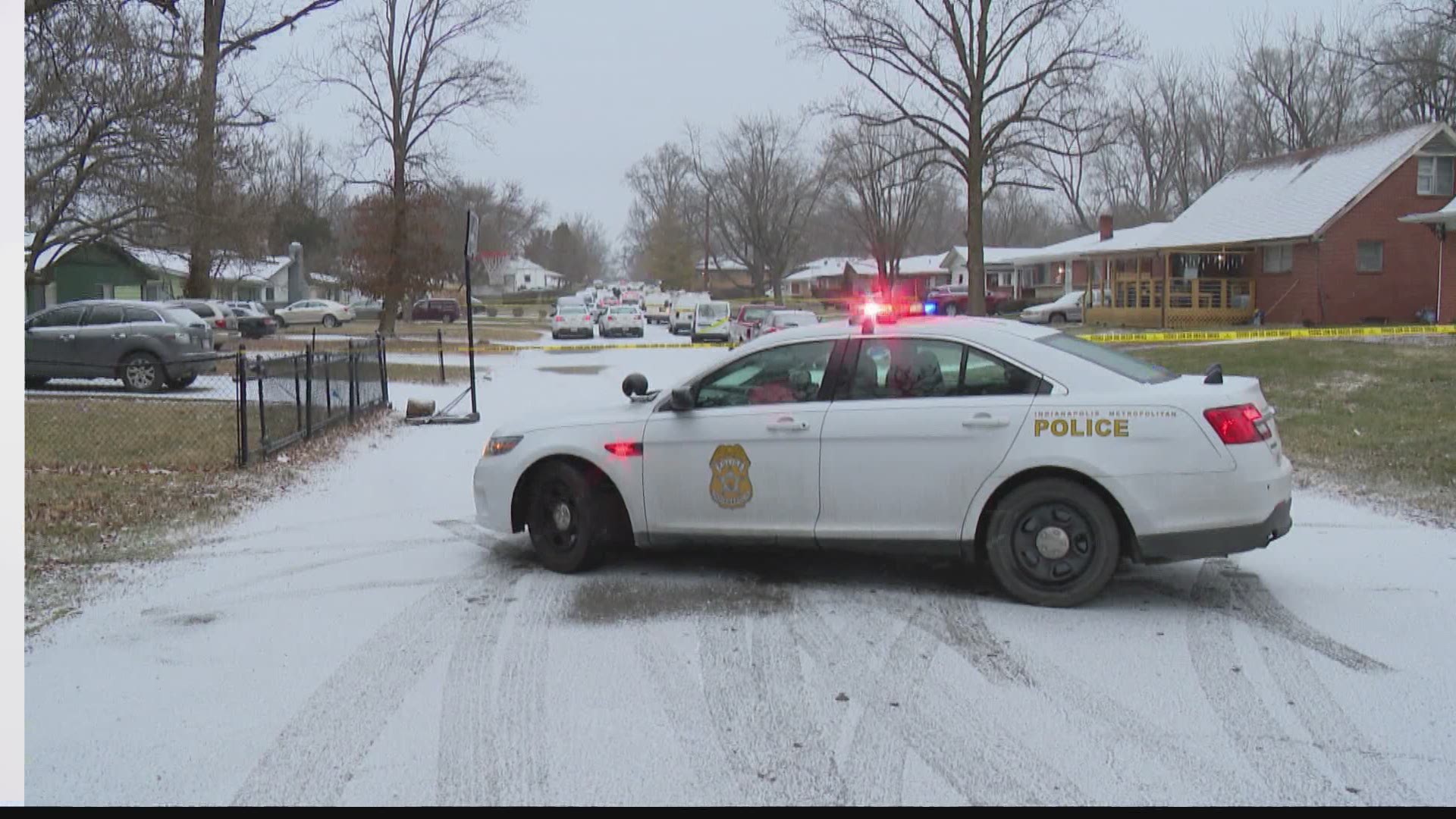 INDIANAPOLIS — IMPD arrested a suspect in what they call the city's "largest mass casualty shooting in more than a decade."

The suspect's name and photo are not being released by IMPD since the suspect is a juvenile. Detectives do not believe any additional people were involved.

"Yesterday, we promised swift justice for this heinous act. Today, we delivered on that promise," IMPD Chief Randal Taylor said. "While removing the alleged perpetrator of yesterday's mass murder from our neighborhoods does not bring back the lives senselessly lost, hopefully, it will bring us one step closer to healing as a community. I am grateful to all of the IMPD officers and criminal justice partners who have worked tirelessly for the last 30 plus hours to bring justice for these victims, their friends and families, and our entire community. I ask community members to join me in praying for the continued recovery of the young man whose life has been forever changed."

Indianapolis Mayor Joe Hogsett said he hopes the arrest offers comfort to those who are dealing with the loss.

"Today's announcement is the first step toward justice for the senseless acts that cut short the lives of six of our neighbors in the early hours of Sunday morning. While nothing can bring back the Childs family, I hope that the swift action of the Indianapolis Metropolitan Police Department offers some comfort to all of those who have been left to grapple with this tragic loss. My thanks go to the men and women of IMPD whose thoughtful investigative work led to the arrest of the suspect, and my prayers are with the family, friends, and community impacted by this devastating act of violence."

The shooting on the northeast side of Indianapolis left multiple people dead, including a pregnant woman and her unborn child, early Sunday morning.

The victims were identified Sunday night:

Police said it appears the family was targeted.

"What happened this morning was a mass murder, a choice of an individual or individuals to bring, and I do not use these words lightly, terror to our community," Hogsett said Sunday. "Today, Indianapolis has lost much, including an unborn life. Justice will be done."

Police were first called to the 3300 block of East 36th Street, near North Sherman Drive, on a reported shooting just after 4 a.m. A juvenile victim was found there and taken to the hospital in critical condition. The juvenile is expected to survive.

Then, officers discovered multiple shooting victims in the same area in the 3500 block of Adams Street around 4:40 a.m.

The juvenile found injured about a block from the home on Adams Street is not the juvenile suspect who was arrested Monday.

"I myself am heartbroken for the lives that were taken too soon, for the young life that has forever been changed, and for the life that never got a chance to start,” Chief Taylor said Sunday.

3/3 Police have expanded their perimeter at least a block in each direction as their search/investigation continues. @MaryWTHR has an update coming up at 9am pic.twitter.com/CqnnKvVDVQ

Police believe a 17-year-old male is responsible for shooting and killing six people, including an unborn baby boy, inside the house on Adams Street.

"The rest of the information regarding the juvenile will come out in the probable cause affidavit in the next couple days," IMPD Assistant Chief Chris Bailey said. "We have 72 hours to file the charges. And I expect it to happen soon and then the full picture of what what occurred will be very clear to to everybody in the community."

UPDATE: The mayor and police chief hold a press conference after 6 people killed, including a pregnant woman and an unborn child. A juvenile was also shot but expected to survive.

Officials are calling this a targeted mass shooting at one home @WTHRcom pic.twitter.com/aIDq2hZevv

Hogsett said he has talked to the U.S. attorney for southern Indiana, the Indianapolis office of the FBI and other federal agencies. Hogsett also said police will go after anyone helping shooters and anyone who provided the guns to them, if they were illegally obtained.

For neighbors, they said this crime left them speechless.

Pinkston said she recently dropped off a few baby items for the expecting mother.

"I had just given them some stuff from my great-grandson when he was born, but he is bigger now. The baby was due next month," Pinkston said.

Crime scene tape was still on the tree outside her home Sunday evening. She said it's a sad reminder of the gruesome crime that happened on her street.

"When I saw them take all the people out of there, I could not believe it. I just hope that they find who did this," she said.

"I know everyone in the city right now is like just wondering what is going on? Why is this happening, especially in the middle of a pandemic?" said Anastasia, outside of the home Monday. "It is very devastating that we have to wake up to something like this in the morning."

Anastasia is a friend who grew up in Gary with Kezzie Childs, one of the victims.

Credit: Rich Nye/WTHR
Friend of Kezzie Childs leaves a teddy bear on the porch in memory of the family killed Sunday.

India Hammond also went to high school in Gary with Kezzie and came to the house Monday.

"She didn't deserve it," Hammond said. "Nobody deserves this, but this is what Indianapolis has become. Wake up every day and somebody new is getting shot, somebody else is getting killed for something that can be resolved without a gun."

There were several other shootings before and after this incident. Since Saturday night, at least 16 people were shot in Indianapolis, including the six that were killed in this incident.

Police ask anybody with information about the shootings call the IMPD Homicide Office at 317-327-3475 or Crime Stoppers at 317-262-TIPS.