LMPD sergeant says they did 'legal, moral and ethical thing' the night of Breonna Taylor's death

In an email sent to colleagues, Sgt. Jonathan Mattingly said Mayor Greg Fischer and other leaders have failed officers 'in epic proportions.' 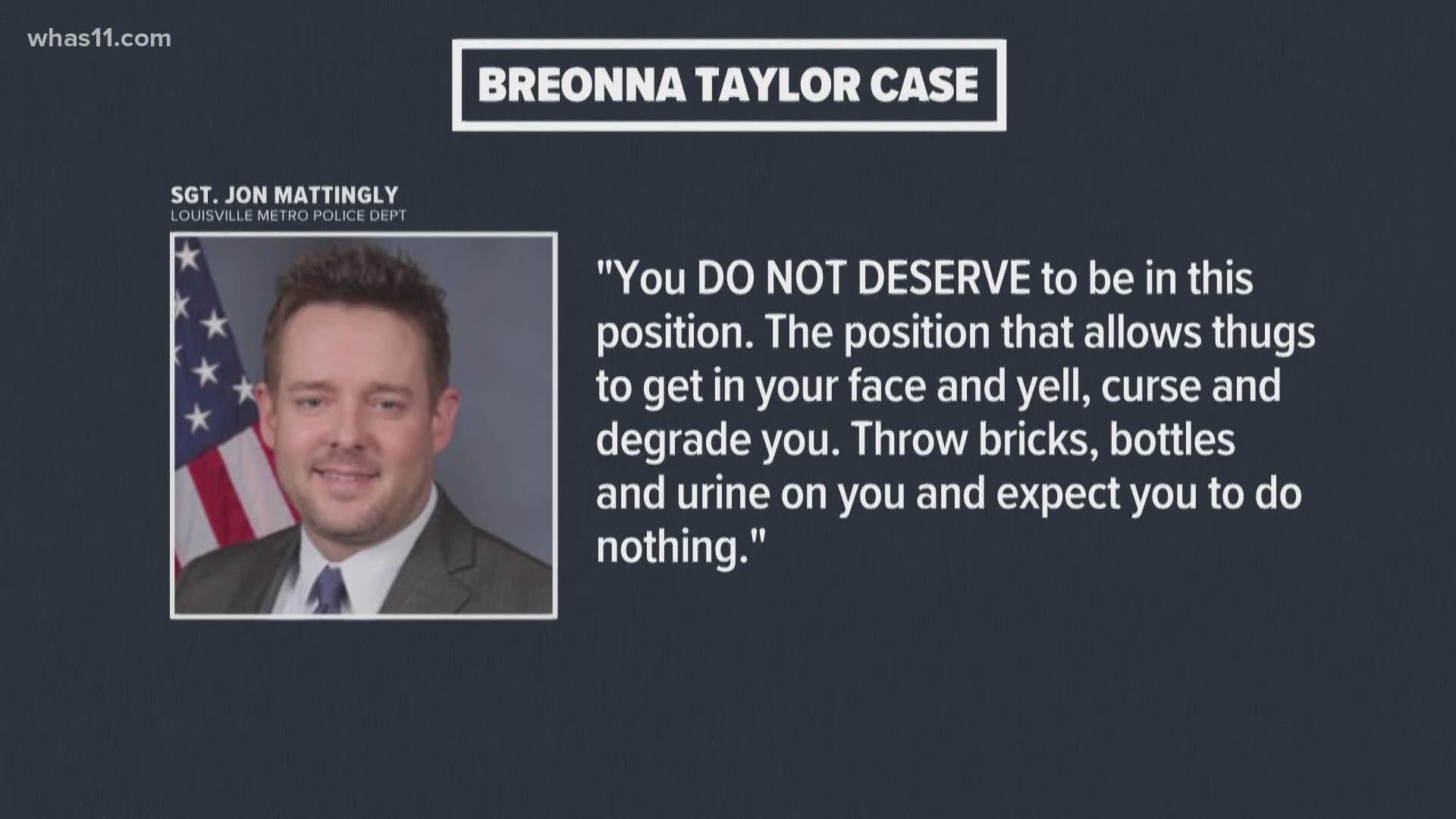 LOUISVILLE, Ky. — An attorney representing Louisville police sergeant Jonathan Mattingly confirmed he sent an email to colleagues expressing his support for them in anticipation of Attorney General Daniel Cameron's decision in the Breonna Taylor investigation.

"You do not deserve to be in this position," Mattingly said. "The position that allows thugs to get in your face and yell, curse and degrade you. Throw bricks, bottles and urine on you and expect you to do nothing."

Mattingly was one of the officers who executed a search warrant at Taylor's apartment the night of her death. He was shot once in the leg by Taylor's boyfriend, Kenneth Walker. While Mattingly said officers announced themselves, Walker's attorneys said he fired one shot in self-defense, not knowing who was coming into the apartment.

In the email, Mattingly spoke about his officers' decision the night of Taylor's death, saying he knows they did the right thing.

"Regardless of the outcome today or Wednesday, I know we did the legal, moral and ethical thing that night," Mattingly said. "It's sad how the good guys are demonized, and the criminals are canonized."

"We've heard all along people saying 'I can't comment, I can't comment,' so I think it's very interesting and it makes me feel like someone has confirmed for him that he's in the all clear," said Sadiqa Reynolds with the Louisville Urban League.

Reynolds said she wasn't surprised by the words that were written, but was disappointed.

"It does not do service to the community to thumb your nose at the pain of the people you are supposed to protect and serve," she said.

Mattingly said officers do not deserve LMPD and the FBI — who he says are not cops and would "piss their pants" if they had to hold the line — going "after" them if they "make a mistake during one of the most stressful times in your career."

Multiple sources sent me copies of the letter, which was confirmed by Mattingly’s Atty.

Here it is in its entirety: @WHAS11 pic.twitter.com/VrTnGiBCrS

▸Everything we know about the Breonna Taylor case

"With that being said these next few days are going to be tough. They are going to be long, they are going to be frustrating" Mattingly said. "Have your partners 6. Deescalate if possible. Do not give the pencil pushers at the top, you know the ones who are too scared to hold the line, a reason to open investigations on you."

Pastor Timothy Findley Jr. with the Justice and Freedom Coalition responded to the email on Tuesday and said he thought it was a hoax at first.

"And to find out that it was real, the level of callousness and insensitivity in this moment was absolutely astonishing to me," he explained. "Even if you felt like you were in the right, to put that out there in this moment, for me it shows there's a chance that he's not going to be indicted."

Attorney Kent Wicker confirmed Mattingly sent an email, saying "he is hopeful that this process moves forward quickly, and that his fellow officers and the people of Louisville remain safe."

When asked about the email during an LMPD press conference, interim Chief Robert Schroeder said it was a situation "that's currently developing." LMPD did announce plans to restrict access into downtown Louisville in anticipation of Cameron's decision.

Mattingly and other officers involved in the investigation were placed on administrative reassignment.

RELATED: Piecing together the night of Breonna Taylor's death