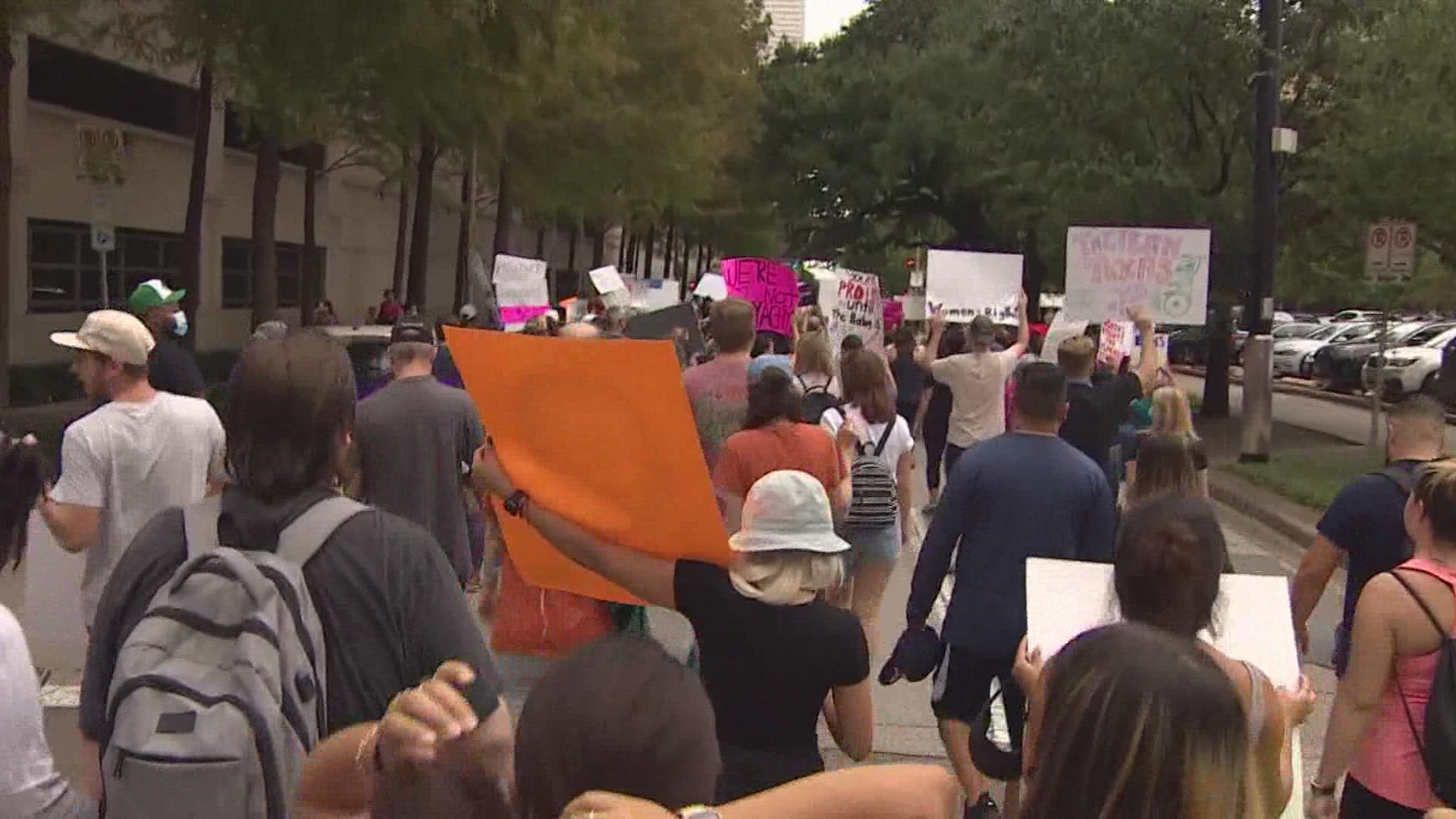 HOUSTON — Their calls could be heard across the nation.

Pro-choice supporters marched Saturday in large cities across the United States, all demanding the end of the controversial Texas abortion law that critics argue impedes on women's constitutional rights.

In Houston, pro-choice supporters marched through the streets of downtown. It was a similar sight in Dallas, San Antonio and Austin: thousands of men and women gathered for a single purpose, the right for women to choose.

Padma Lakshmi, the famous "Top Chef" television host, stood on the steps of city hall during the Houston's Women's March.

"My mother's generation fought for the same things that we're fighting for now. It seems ludicrous that nothing has changed," Lakshmi told KHOU 11 reporter Janelle Bludau. "I was 3 years old when Roe vs. Wade happened. I can't believe I'm fighting for the same stuff, but fight we must."

During her speech, Lakshmi talked about how her mother made the difficult decision to get an abortion after a crash left her mother badly injured and unable to work.

Thousands stand in front of City Hall for the #WomensMarch. @KHOU pic.twitter.com/GxnFLA9psF

“At that time, not only could my parents not afford another child, but her body could not physically sustain another pregnancy,” Lakshmi said. “It’s out of love for me that they made the difficult decision to do what was right for our family. It’s out of love for my mother and all families that I stand here today, ready to fight.”

In cities across the United States, pro-life supporters held marches and protests over the weekend, with the Texas abortion law as the main focal point.

The Texas Heartbeat Act bans abortion six weeks after gestation, or once doctor's can confirm a heartbeat.

The law, considered a virtual prohibition on the procedure, is different from previous anti-abortion laws previously pushed in the Texas legislature. It give private citizens the power to seek civil lawsuits against those accused of getting, performing or supporting a woman in getting an abortion.

Since the law went into effect in, Gov. Greg Abbott has signed another bill that tightens restrictions on abortion-inducing drugs. This law bars doctors from giving these meds to those who are more than seven weeks pregnant.

RELATED: What does the new Texas abortion law do?

RELATED: 'They're literally begging to get in' | Texas abortion law pushing women across state lines for procedure

Lakshmi, who is currently in Houston filming the latest season of "Top Chef," said she planned to march no matter what city she was in. She said she believes that everyone, male or female or non-conforming, should have control of their bodies.

"I hope people understand that it's a personal decision. It's a complicated decision, and at the very core, it's an individual decision," Lakshmi told Bludau. "It's a very dangerous place to be when the state starts telling you what medical procedures, you can do and can't do. That is a really scary place."