Prince George's Co. to only allow county residents, workers to sign up for COVID-19 vaccine, cancels other appointments

A teacher who lives and works in Montgomery County was surprised to find out her appointment was canceled when she showed up Monday. 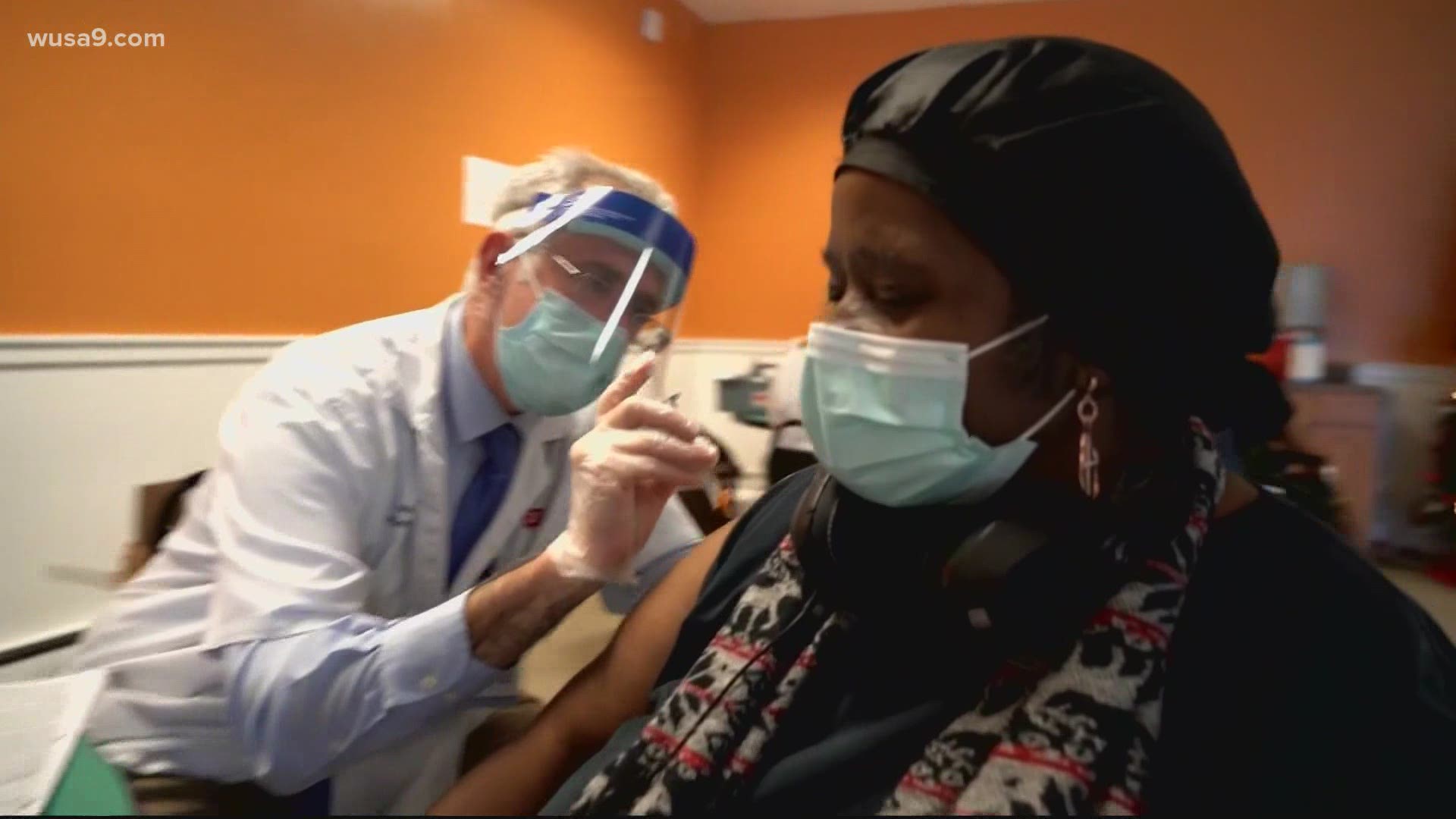 UPPER MARLBORO, Md. — County Executive Angela Alsobrooks announced Monday that Prince George's County will only vaccinate people who live or work in the county after discovering that a lot of slots had been taken by people from out of town.

The news came as a surprise to some people who traveled to the Prince George's Sports and Learning Complex for their scheduled appointment.

Moon Choi lives and works as a teacher in Montgomery County and said she had a 2:40 p.m. slot for Monday. When she showed up, she said staff asked her if she lived in Prince George's County -- and turned her away when she said "no."

“It was for me one hour driving, and I did not get anything," Choi said. "So I just come here for 1 hour driving. They said Montgomery County has to give you a vaccine...My school right now is closed, but we’re planning to open in April. I don’t want to go there without the vaccine, but I really tried to find available vaccine for quite a while yesterday. No way!”

Montgomery County only recently opened pre-registration for vaccine appointments to adults 75 and older and has yet to allow teachers to register.

This morning, @CEXAlsobrooks announced @PrinceGeorgesMD canceled #Covid_19 vaccine appointments not made by people who live or work in the county.

That surprised this Montgomery Co. teacher who had driven 1 hr. for her appointment and was then turned away. @wusa9 pic.twitter.com/NcEbM3aosL

Alsobrooks said this comes amid a very limited vaccine supply and after ongoing concerns of older residents who were unable to register for a vaccine. She said people who live outside the county were taking up appointments, because the state website did not prohibit them from signing up for a vaccine in other jurisdictions. Authorities revealed as many as 50% of the people getting appointments for vaccinations in Prince George’s are coming from outside the county.

The county has since made some adjustments. They will now require residents to pre-register and show proof of residency or identification for every vaccine appointment. This will be followed by a private appointment link.

They want to make sure their vaccine doses go to people like Michael Kenny, who works as an assistant principal at PGCPS.

“I have a daughter with some complex medical needs, too, so we’ve been really locked down just trying to protect her and make sure that we didn’t bring anything home to her," Kenny said. "So it will be a huge relief for my wife and I.”

He signed up the day the county opened appointments to 1B -- January 18.

“It was kind of if you didn’t get on those first couple days, that was it, and now people are just wondering what are they supposed to do now," he said.

Alsobrooks said the county has 95,000 residents in 1B alone, so even though the county opened pre-registration to group 1C Monday, she said it could take weeks until they get appointments.

“It’s hard, because everyone’s just trying to get through this and be safe," Kenny said.

Alsobrooks said they are trying to ensure they move in a fair and equitable way during the vaccine distribution process and are asking for patience.

"It has been a challenge for us," Alsobrook said. "And we are really ramping up our efforts all along."

Starting next Monday, the county will have a vaccination hotline for those with technology barriers. And they are currently working on a plan to get teachers and administrators vaccinated starting Saturday.

They hope to have people in 1C vaccinated in the coming weeks and are urging them to register so that they will be prepared when their time comes for an appointment.

If you received the first dose of the vaccine with the county, you will receive the second dose as well, county officials said. 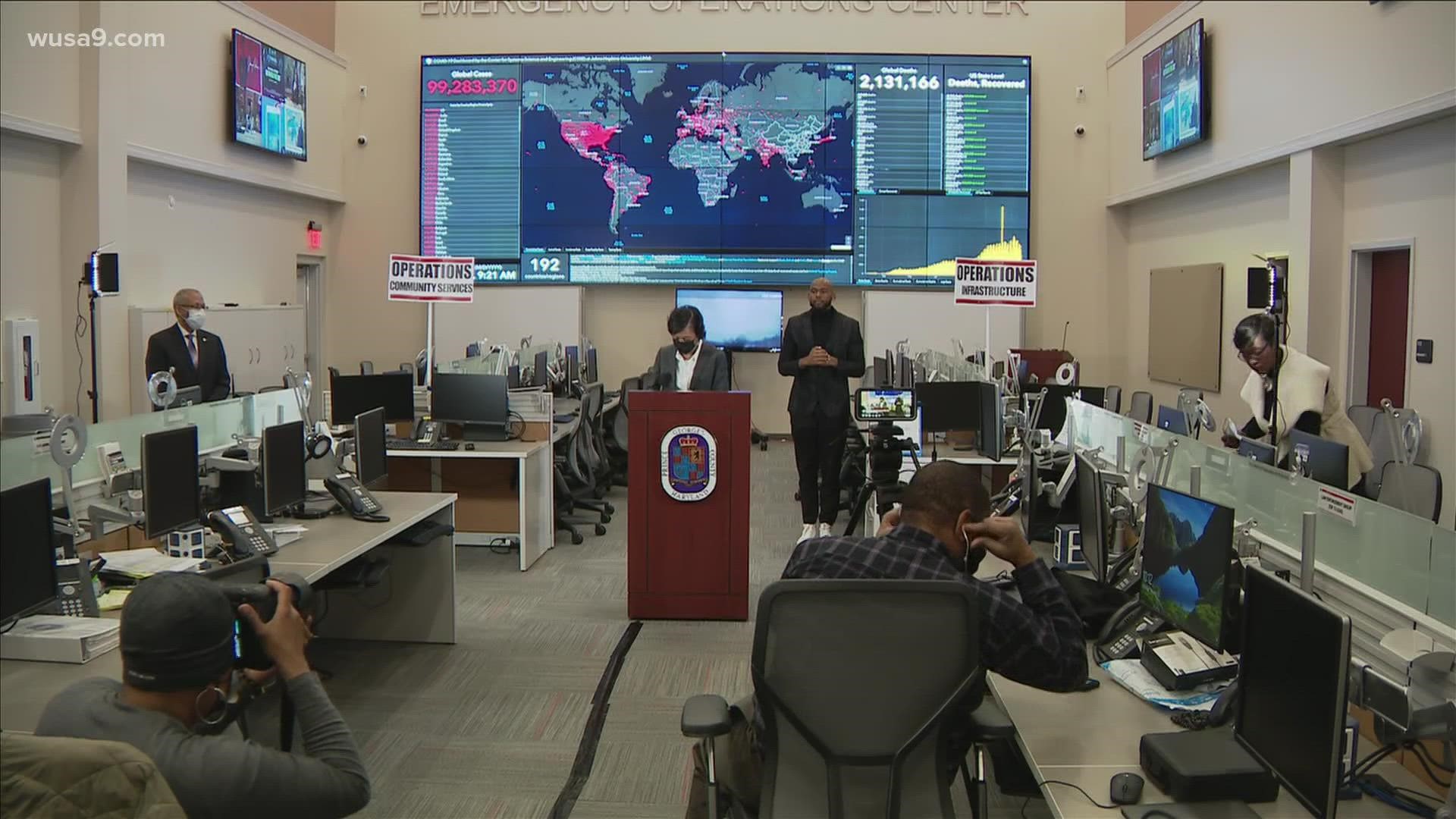