Owner of Kissing Tree Vineyards in custody of US Marshals, taken to Washington DC to be arraigned on all federal charges

Christopher Grider, the owner of Kissing Tree Vineyards in Bruceville-Eddy, is now in the custody of US Marshals

BRUCEVILLE-EDDY, Texas — Christopher Grider, the owner of Kissing Tree Vineyards in Bruceville-Eddy, is now in the custody of US Marshals. A judge ordered Wednesday that he be taken to Washington DC to be arraigned on all federal charges he faces.

Grider faces a maximum of 20 years in prison for his involvement in the US Capitol riots that took place three weeks ago.

"I'm deeply disappointed in the decision," Grider's Attorney Brent Mayr said. "We are dealing with an unprecedented time that's a tragedy beyond anything else but you don't fix a tragedy by creating another one."

Judge Hightower in Austin denied Grider the chance to go home. Instead, he was remanded to the custody of the US Marshals for transport to Washington DC. The prosecutor argued Grider was not just a bystander, but rather an active participant.

Hightower referenced the helmet Grider gave to another rioter that was used to bash in the windows and doors of the US Capitol.

"You heard what her decision is based upon, him being a danger to the community and here is a man for his entire life has never been accused of any type of violent act, violent offense, any threats," Mayr said after the proceedings in a Zoom interview. "Yet what occurs or transpires, allegedly, within just a matter of seconds, for her to find clearly and convincingly that he's a danger to the community is contrary to what the real evidence is."

Mayr told 6 News it's difficult for him and his client along with hundreds of people who are standing behind him. Mayr said that they submitted 25 letters to the courts from various people Grider has known through the years. In the end, the judge ruled that the government met its burden of proof to show Grider is a danger to the community if he was to be released.

Grider, who sat mostly quiet and emotionless during the 40-minute proceeding, did ask to speak with his attorney privately after the ruling.

"It's not clear to say," Mayr said when asked that with all the evidence that shows Grider inside the US Capitol three weeks ago, was it clear a crime was committed? "That's where we're going to have to spend the next several weeks and months investigating, is the why?

Mayr said Grider is not a part of any groups that were looking to overthrow the government or lead an insurrection, to riot or damage anything. He also said it's too early to tell if a plea agreement is possible because of a new video he watched after Wednesday's hearing.

"He's just there, he's watching what's taking place. He's not bending things around, he's not carrying around podiums. He's just there and watching, like I said. That's what the video shows. But again, we need to see what else is out there before we make any decisions moving forward," Mayr said of the new video he watched.

Mayr said he doesn't know when Grider will be transported to Washington, D.C. as that information is not made public but said his client does not deserve to be locked up.

"Let there be no doubt, there were some bad and evil people there and those people need to be held accountable. There are people who are a danger to the community and do need to be locked up. Chris Grider was not one of those people," he said. 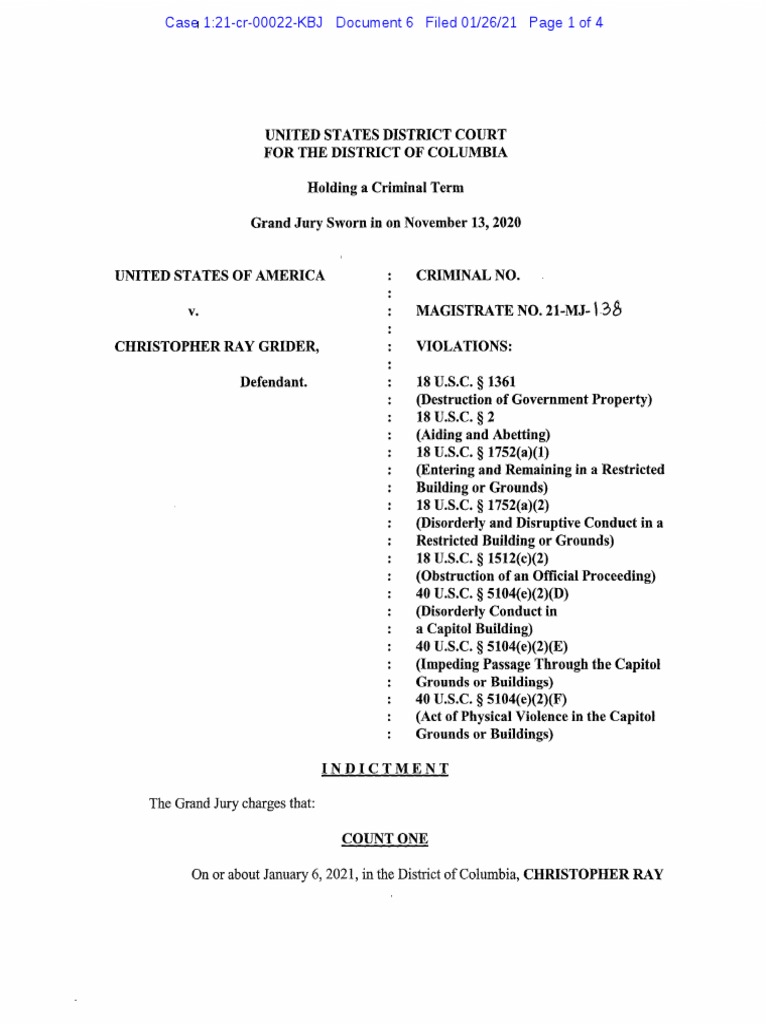