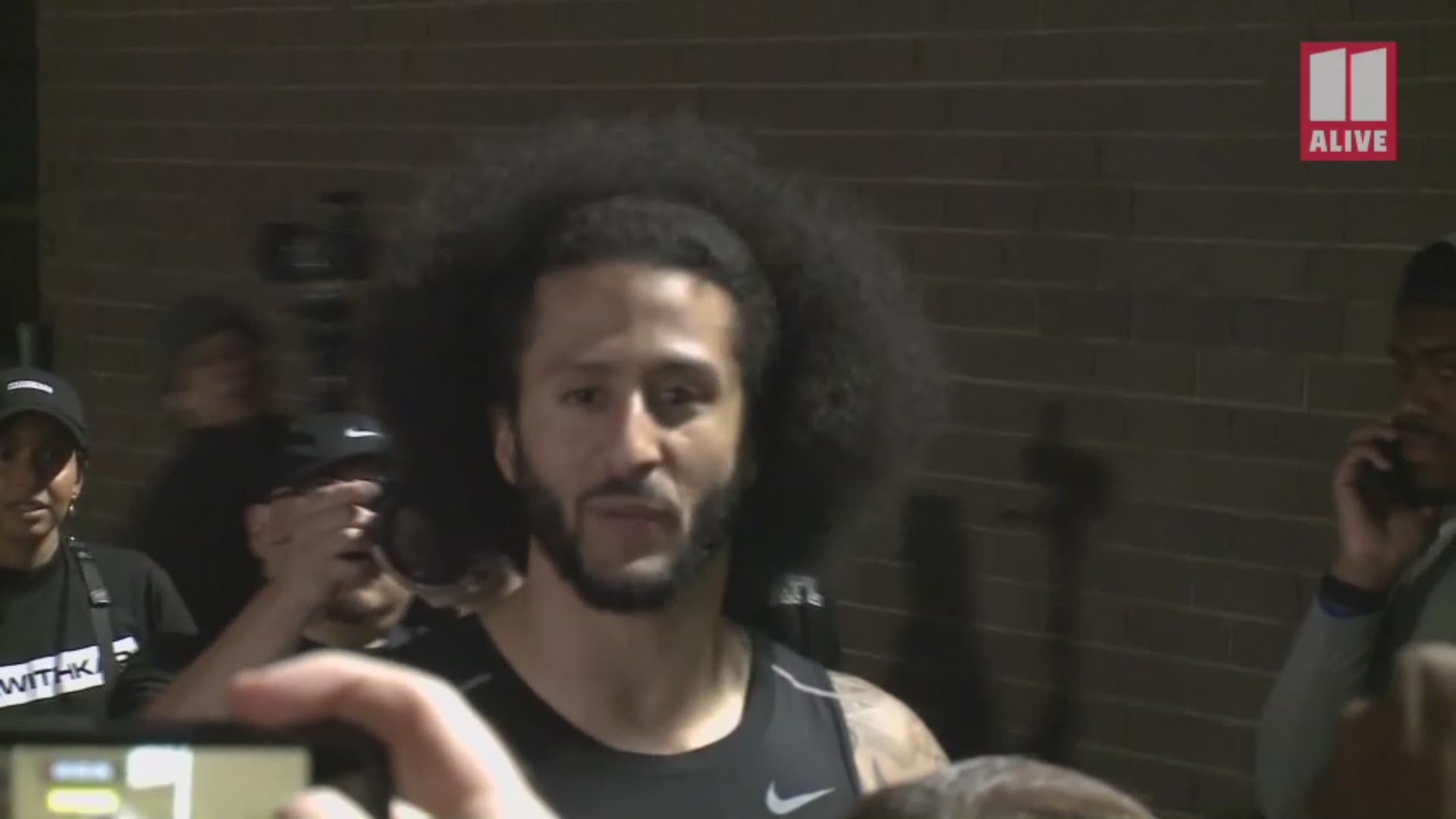 RIVERDALE, Ga. — Colin Kaepernick spoke in no uncertain terms when he walked off the field at Riverdale's Charles Drew High School on Saturday: "The ball's in their court we're ready to go."

Kaepernick, who was initially scheduled for a private workout at the Falcons' training facility in Flowery Branch, ended up holding the event publicly at a local high school about 50 miles to the south. The decision appeared to be over a dispute over whether the event would be public, among other things.

"Our biggest thing with everything today was making sure we had transparency in what went on," Kaepernick said. "We weren't getting that elsewhere so we came out here. It's important that y'all are here."

RELATED: Colin Kaepernick works out in Atlanta for NFL teams

A spokesperson for Kaepernick released a statement earlier in the day saying that there were concerns about the liability waiver he was being asked to sign and also about the fact that media would not be allowed to attend.

"Mr. Kaepernick requested all media be allowed into the workout to observe and film it and for an independent film crew to be there to ensure transparency," the note stated.

Kaepernick said that he's ready to get back on the gridiron but hasn't been allowed.

RELATED: Falcons confirm they will have a scout at workout for Colin Kaepernick

He said that the decision now rests with the League.

He added that his agent is ready to talk to any team that's interested and he's ready to interview with them.

"I've been ready, I'm staying ready and I continue to be ready," he said.

While it's unclear how many representatives from the NFL's teams made it to the Riverdale workout, the NFL released a statement saying three-fourths of its teams were represented in Flowery Branch.

The League goes on to detail several ways it worked to accommodate the veteran quarterback including the use of his own receivers and allowing his agent to suggest questions for the interview.

The NFL also said that Kaepernick requested to film a Nike ad featuring all teams that were present for the workout - which the League claims it granted.

As for the standard liability waiver, the NFL said the waiver it used was based on the one used by National Invitation Camp "at all NFL Combines and by NFL clubs" when trying out free agents. The organization suggests that Kaepernick's representatives rewrote the waiver in a way that was "insufficient."

The NFL said it found out only Saturday afternoon that Kaepernick wanted the event open to the media. The organization said that it agreed to allow the quarterback's representatives on the field to "allow them to see how it was being recorded" the statement said. But they add that it was "clear from the beginning that this was a private workout."

"We confirmed with Colin's representatives that they would receive both the video that would be sent to all 32 clubs as well as the raw footage from the entire event, which is unprecedented," the statement went on to say.

The message concluded that Saturday's decision to move the event "has no effect on his status in the League" and that he "remains an unrestricted free agent eligible to sign with any club."

Sophie Speaks: How a Georgia mother allowed her boyfriend to impregnate her 10-year-old