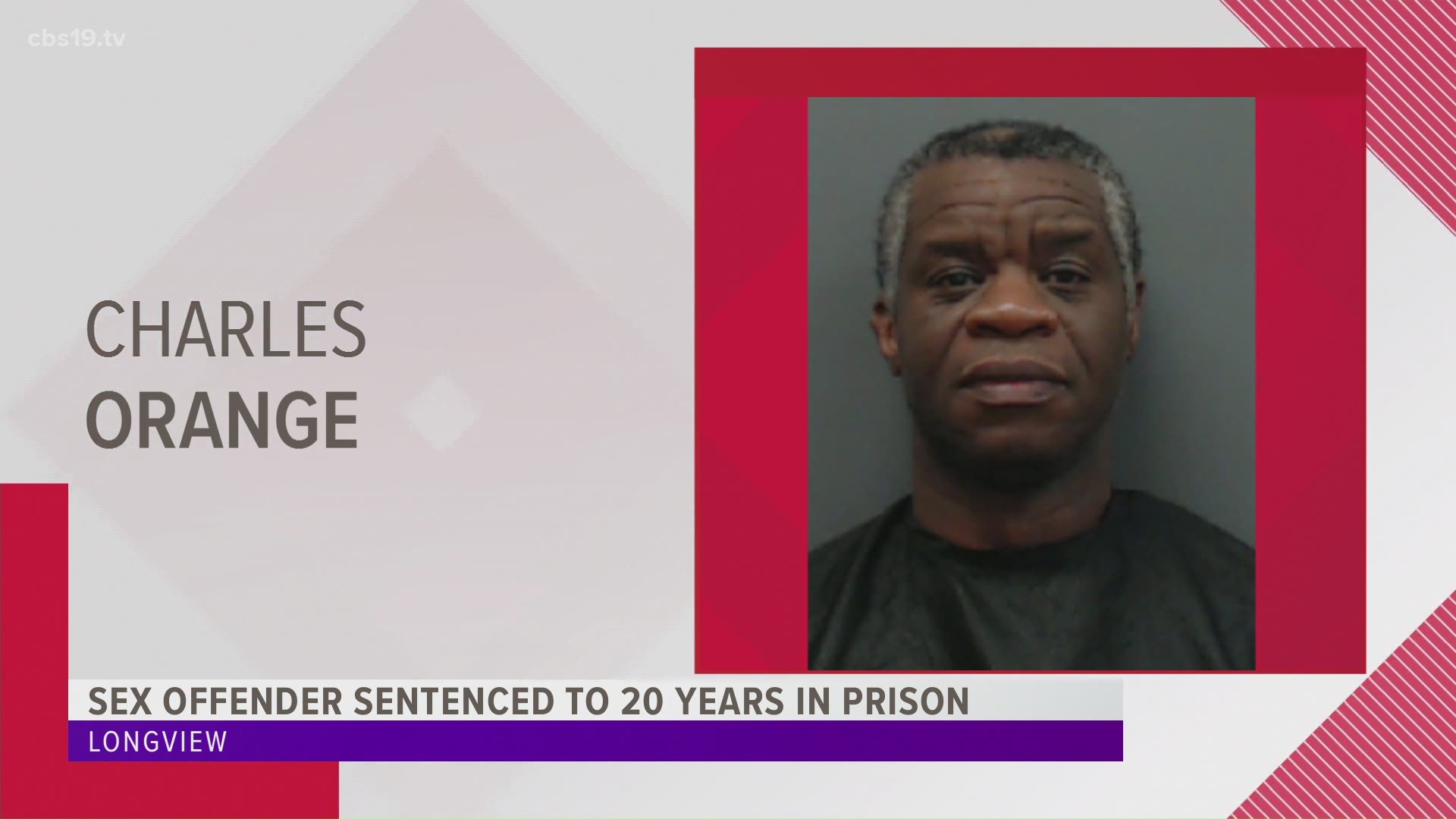 LONGVIEW, Texas — A Longview sex offender who was identified as part of a joint international investigation has been sentenced to federal prison for child pornography violations in East Texas.

Charles Orange, 55, was convicted by a jury on Sep. 18, 2020, of possession of child pornography and was sentenced to 240 months in federal prison by U.S. District Judge Robert W. Schroeder III on March 4, 2021.  Following Orange’s release from federal prison, he will be placed on a life term of supervised release.

“There is no place for Charles Orange in lawful society,” said Acting U.S. Attorney Nicholas J. Ganjei.  “He is unapologetic, unrepentant, and unremorseful. Nothing short of incarceration will stop him from engaging in the sexual exploitation of children.  The Court’s sentence sends a clear message to Charles Orange and to other likeminded predators – the public has the right to be protected.  On behalf of the Eastern District of Texas, I wish to express my gratitude to HSI, INTERPOL, Thailand’s DSI, Australia’s AFP, and our other law enforcement partners from around the world for their tireless efforts and shared commitment to save the lives of children and bring sexual predators to justice.”

“Finding and arresting devious child predators who attempt to evade detection by law enforcement through use of the dark web and other anonymizing technologies remains a top priority for our agency,” said Ryan L. Spradlin, Special Agent in Charge of HSI Dallas. “Fortunately, the investigative actions of our dedicated special agents have prevented this deviant from victimizing children within our community while also reminding other criminals that there are no safe spaces on the internet for sexual exploitation of children.  We remain committed to our global law enforcement partnerships in fighting child sexual exploitation, and we will continue to relentlessly pursue the predators who seek to steal the innocence of our children.”

According to information presented at trial, the investigation of Orange originated as a lead from INTERPOL’s Operation Blackwrist.  Agents with HSI Tyler, acting upon information provided in the INTERPOL lead, executed a search warrant on Dec. 20, 2018 at Orange’s residence in Longview, Texas.  A device containing child pornography was found on a dresser next to Orange’s bed.  According to the testimony of a forensic analyst, child pornography contained on the device had been accessed and downloaded as recently as the night before the execution of the search warrant.  Analysts testified that Orange’s email address, Internet history, and Internet Protocol (IP) address connected him to the child exploitation website identified in Operation Blackwrist.  Additionally, evidence presented at trial showed that the device was used to take surreptitious photographs of young boys in stores in Longview the day before the execution of the search warrant.

In 2008, Orange was convicted of Indecency with a Child and was required to register as a sex offender.

Operation Blackwrist, named after a bracelet worn by one of the victims, was launched by INTERPOL in 2017 following the discovery of material depicting the abuse of 11 boys, all under 13 years old.  The material—first identified on the dark web—originated from a subscription-based website with nearly 63,000 users worldwide.  For years, the site had published new material weekly, with the abuser taking great care to avoid detection, often masking the children and leaving very few visual or audio clues.  Officers relied on the physical traits of the children to track their ongoing abuse and reached out to the global police community for help.

In June 2017, Thailand’s Department of Special Investigations (DSI) took on the case, working in close collaboration with INTERPOL’s Liaison Bureau in Bangkok.  Investigators around the world also joined the effort to identify the 11 boys and locate website administrators.  HSI eventually identified the website IP address and worked to establish links to the United States.

Bulgaria’s Cybercrime Department at the General Directorate Combating Organized Crime, supported by Europol, took down the website’s servers. The Department of Internal Affairs in New Zealand deconflicted intelligence and compiled information packages on website users for INTERPOL member countries.  The U.S. National Center for Missing and Exploited Children cross-checked e-mail addresses and provided additional intelligence.  The Australian Federal Police (AFP) and South Australian Police came on board when an IP address pointed to a location in Adelaide.

In November 2017, the first victims were identified, leading to simultaneous arrests in Thailand and Australia two months later.  The website’s main administrator, based in Thailand, was identified as Montri Salangam.  He was the man seen abusing the 11 boys, one of whom was his nephew.  The children had been lured to Salangam’s home with meals, internet access and football games.  A second administrator, Ruecha Tokputza, was based in Australia.  Police found thousands of images taken in both Thailand and Australia on his seized devices, some of which featured Tokputza as the main abuser.  The youngest identified victim during the South Australian court proceedings was just 15 months old.

In June 2018, Thai courts sentenced Salangam to 146 years in prison on charges of child rape, human trafficking, and possession and distribution of child sexual abuse material.  A second man, an elementary school teacher close to Tokputza, received 36 years in prison on the same charges.  On May 17, 2019, an Australian judge sentenced Tokputza to 40 years and three months in prison, the longest sentence ever imposed in Australia for child sex offenses.   The judge referred to Tokputza as “every child’s worst nightmare” and “every parent’s horror.”

INTERPOL Secretary General Jürgen Stock welcomed the successful prosecutions and applauded the massive international effort required.  “Operation Blackwrist sends a clear message to those abusing children, producing child sexual exploitation material and sharing the images online: We see you, and you will be brought to justice.  Every child abuse image is evidence of a crime and INTERPOL will always provide its full support to officers on the ground to help identify and rescue victims around the world.”

“These efforts have already resulted in numerous arrests in the United States to include individuals occupying positions of public trust.  We are proud to be a part of these international efforts,” said HSI Bangkok Regional Attaché Eric McLoughlin.

The website sparked a series of investigations around the world, leading to further arrests in Thailand, Australia, and the United States.  Police in nearly 60 countries examined referrals compiled by New Zealand.

HSI Bangkok and HSI Indianapolis partnered with INTERPOL and DSI, as well as other law enforcement agencies, to pursue any investigative leads with a potential nexus to the United States.  On January 16, 2018, HSI Bangkok assisted Thai authorities with the execution of search and arrest warrants in furtherance of this operation.  One arrest was executed, and five victims were rescued at the time of the operation.

To date, the operation has led to the rescue of 50 children, as well as the arrest and prosecution of child sex offenders in Thailand, Australia, and the United States.

The investigation leading to the charges was conducted by agents from the U.S. Immigration and Customs Enforcement, Homeland Security Investigations, and the Longview Police Department with support from HSI C3.  Assistant U.S. Attorneys Nathaniel C. Kummerfeld and Marisa Miller prosecuted this case.