It was the inclusion of two stickers that school officials said caused a stir. 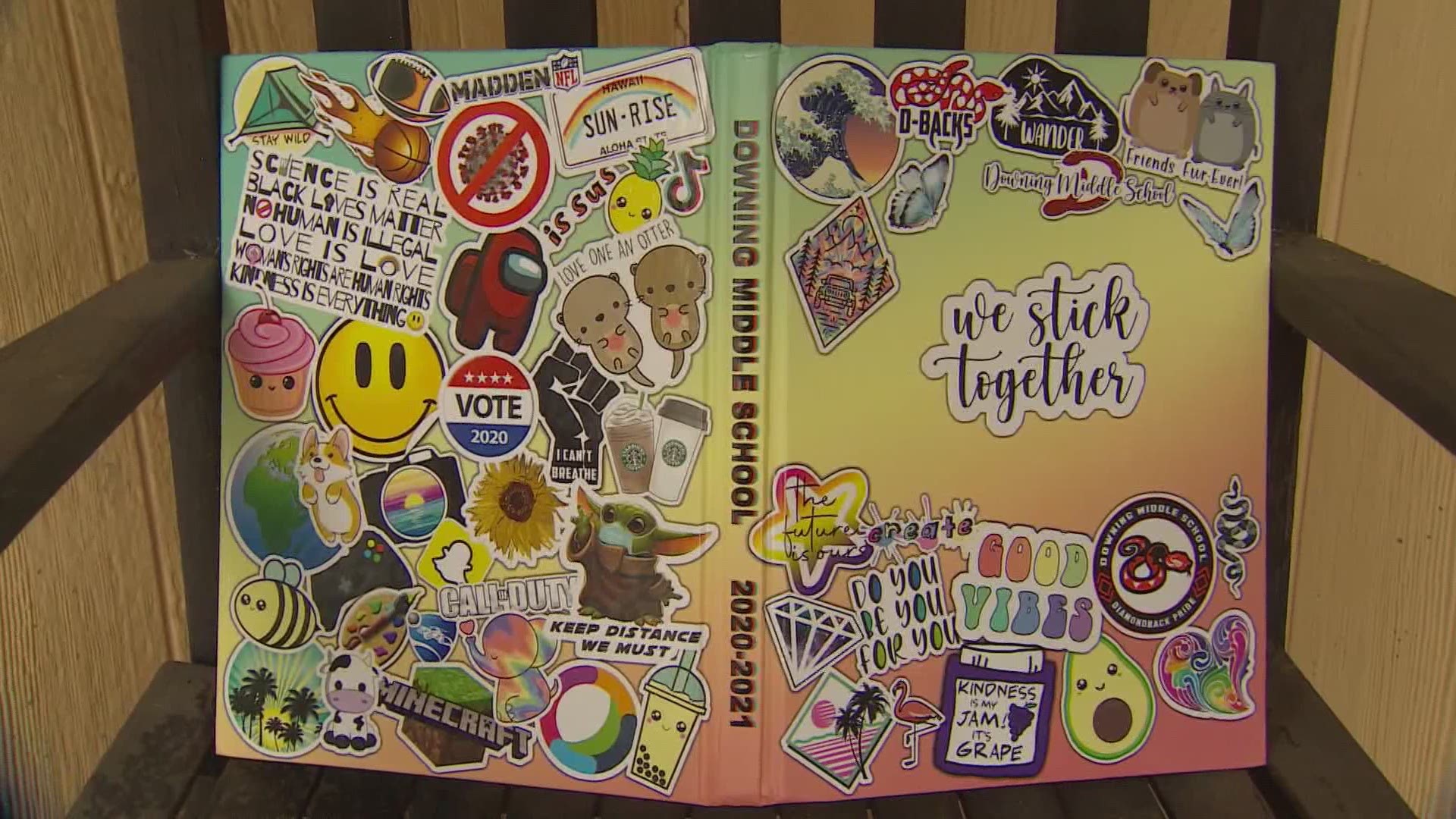 FLOWER MOUND, Texas — A Lewisville ISD middle school is trying to smooth things over, and a teacher has been placed on administrative leave after apparent backlash over the back cover of its yearbook.

The theme of this year's student-designed yearbook for Downing Middle School, according to school officials, was "We Stick Together" and included several stickers featuring "life in 2020-21" on the back, including Minecraft, the Mandalorian, Starbucks, Call of Duty and others.

However, it was the inclusion of two stickers that school officials said caused a stir. One sticker included the quote "science is real, Black lives matter, no human is illegal, love is love, women's rights are human rights, kindness is everything;" the second was of a closed fist with the words "I can't breathe."

This 2021 yearbook is causing a lot of controversy in Flower Mound.

Many parents & students are upset after seeing a #BlackLivesMatter & #icantbreathe sticker on the yearbook.

An art teacher has been placed on administrative leave, after so many parents have been complaining. pic.twitter.com/ogOECDTA1n

In a letter to parents, principal Curt Martin said when he reviewed and approved the sticker in question, he said none of the stickers "evoked a political message for me, but rather a documentation of the issues we face as a campus, a community and a nation."

"I absolutely realize some don't share that view, including a number of Downing students, staff and families," he continued. "For those with concerns, please accept my sincere apology for not considering your perspective on these stickers."

In light of the situation, the school said it would be offering full refunds for the yearbook, as well as an alternate sticker that reads "Be Happy, Be Bright, Be You" to place over the printed stickers on the back cover so that students can keep the signatures already in the book.

Martin added he spoke to the members of the yearbook class to let them know "these issues are by no means a reflection of their work."

In a follow-up letter to the school community, the principal said he "sincerely regret(s) the way this situation has impacted our school community, and I want to assure you I have learned an important lesson as a campus leader."

"I take full responsibility for where we are, and hope I can earn back the trust of those of you who feel disappointed and angry right now," Martin continued. "I assure you moving forward I will be more aware of our duty to remain neutral."

WFAA spoke to one parent who has a child at the school. She said she supports the children and the yearbook cover. But, others in Flower Mound don’t agree with her or her child’s opinions.

The mom, who asked not to be identified over fear of retaliation, said kids in school have been even saying hurtful things to her child.

“All lives matter. You’ve been raised wrong,” the parent recounted.

There is also a petition circulating, making sure the art teacher gets back in the classroom, where they say, she is loved by so many students.

In a statement from the Lewisville ISD, the district said Martin "successfully resolved concerns" over the yearbook and honored the comments from both sides of the situation that allow families to choose a yearbook cover that best represents their views.

"LISD has always supported the efforts of teachers and administrators to provide outlets for the voices of students in our district publications," the statement read. "It is our best hope that all of our teachers connect with students in a way that makes them feel safe and creates a sense of belonging in every classroom. Having said that, we expect staff to remain neutral while engaging students in these conversations, in accordance with district policy."

The district added that while a teacher has been placed on leave - and not suspended - it is not because of complaints by parents. It added that it is taking time "to ensure we fully review the circumstances surrounding the design of the yearbook and that we have all the facts before any further action is considered."

Meanwhile, some parents have started circulating a petition to get the teacher - beloved by many students, according to the parent WFAA spoke to - back in the classroom.