Larry Rendell Brock was arrested in Texas Sunday. Hillwood Airways in Fort Worth confirmed to WFAA on Saturday that Brock was no longer with the company. 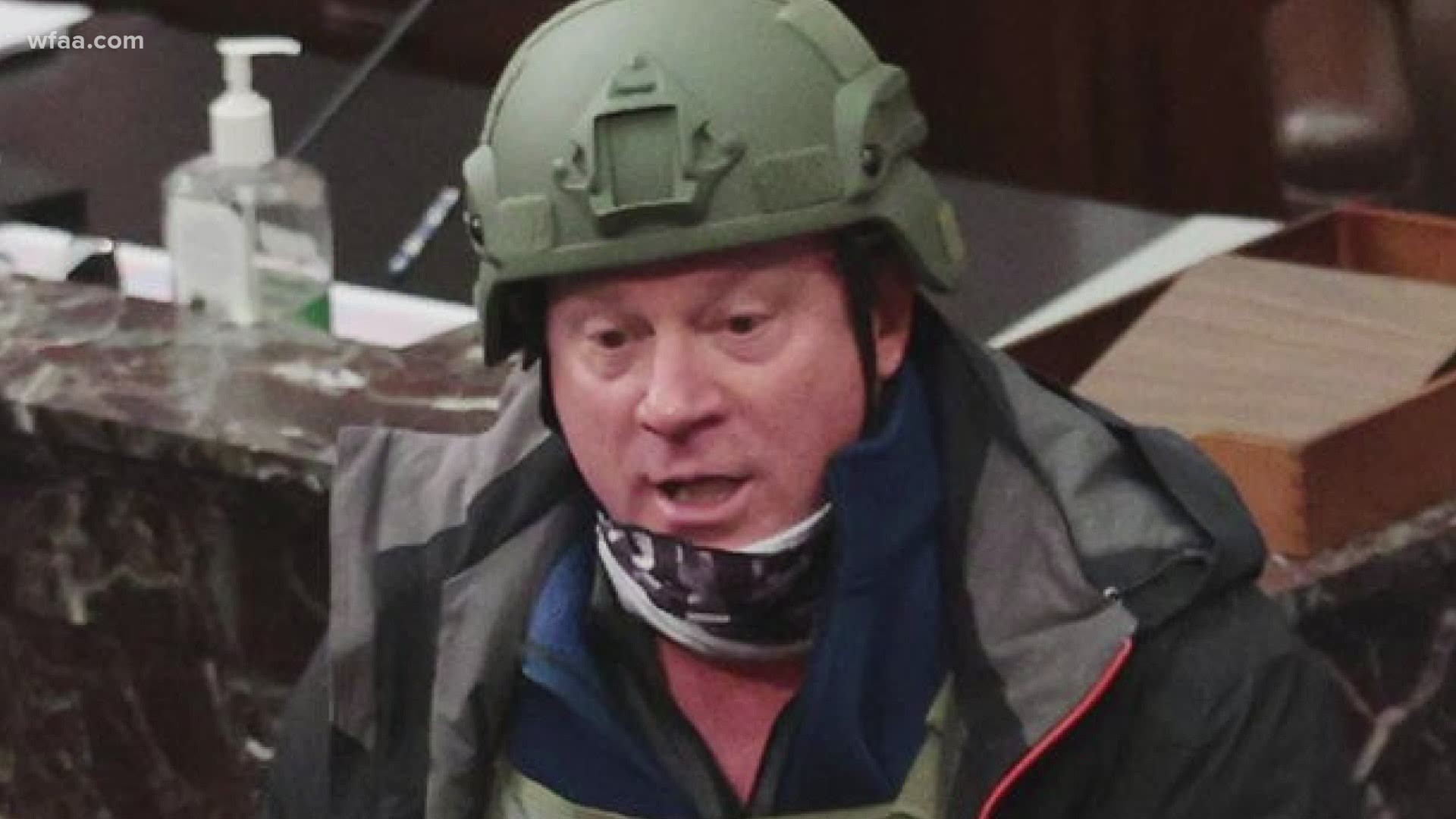 Updated at 2:54 p.m. Monday to include arrest photo of Brock.

A Grapevine man turned himself in to the FBI at the Grapevine Police station on Sunday, federal officials confirm.

Larry Rendell Brock was placed under arrest following an FBI investigation into his involvement in the siege at the U.S. Capitol, according to a release from the Department of Justice.

According to a federal arrest affidavit released Sunday, two witnesses, including Brock's ex-wife, called the FBI and reported him after seeing him in a photo of last Wednesday's riots.

On Sunday, Brock was charged in federal court in the District of Columbia on two counts. He faces one count of knowingly entering or remaining in any restricted building or grounds without lawful authority and one count of violent entry and disorderly conduct on Capitol grounds, federal officials said.

Brock is temporarily being held in the Grapevine jail, a representative for Grapevine police confirmed. He is expected to make an initial court appearance early Monday.

Hillwood Airways in Fort Worth confirmed to WFAA on Saturday that Brock was no longer with the company.

Federal officials say Brock allegedly was part of the group that unlawfully entered the U.S. Capitol.

Brock was identified as wearing a green helmet and tactical vest with patches, a black and camo jacket and beige pants. Officials said he was also holding a white flex cuff, which is typically used by law enforcement to restrain or detain people.

Brock's ex-wife reported him to the FBI on Jan. 8, according to an arrest affidavit released Sunday. The woman said she had been married to Brock for 18 years.

"I just know that when I saw this was happening I was afraid he would be there," the woman told the FBI, according to the affidavit.

She said she recognized Brock's "military-style helmet, khaki pants, gray and black fatigues over a military vest, and a patch from his military service."

Another person emailed to report Brock on Jan. 8, saying he recognized the military insignia Brock was wearing.

The affidavit also says that a man matching Brock's description can be seen in a YouTube video walking out of Speaker of the House Nancy Pelosi's office. It also makes reference to a New Yorker article where two of Brock's family members identify him as being at the Capitol on Jan. 6.