Where do homeless people go when camps are removed in Portland?

The city of Portland announced it will get more aggressive in removing homeless encampments. But where do the campers go? 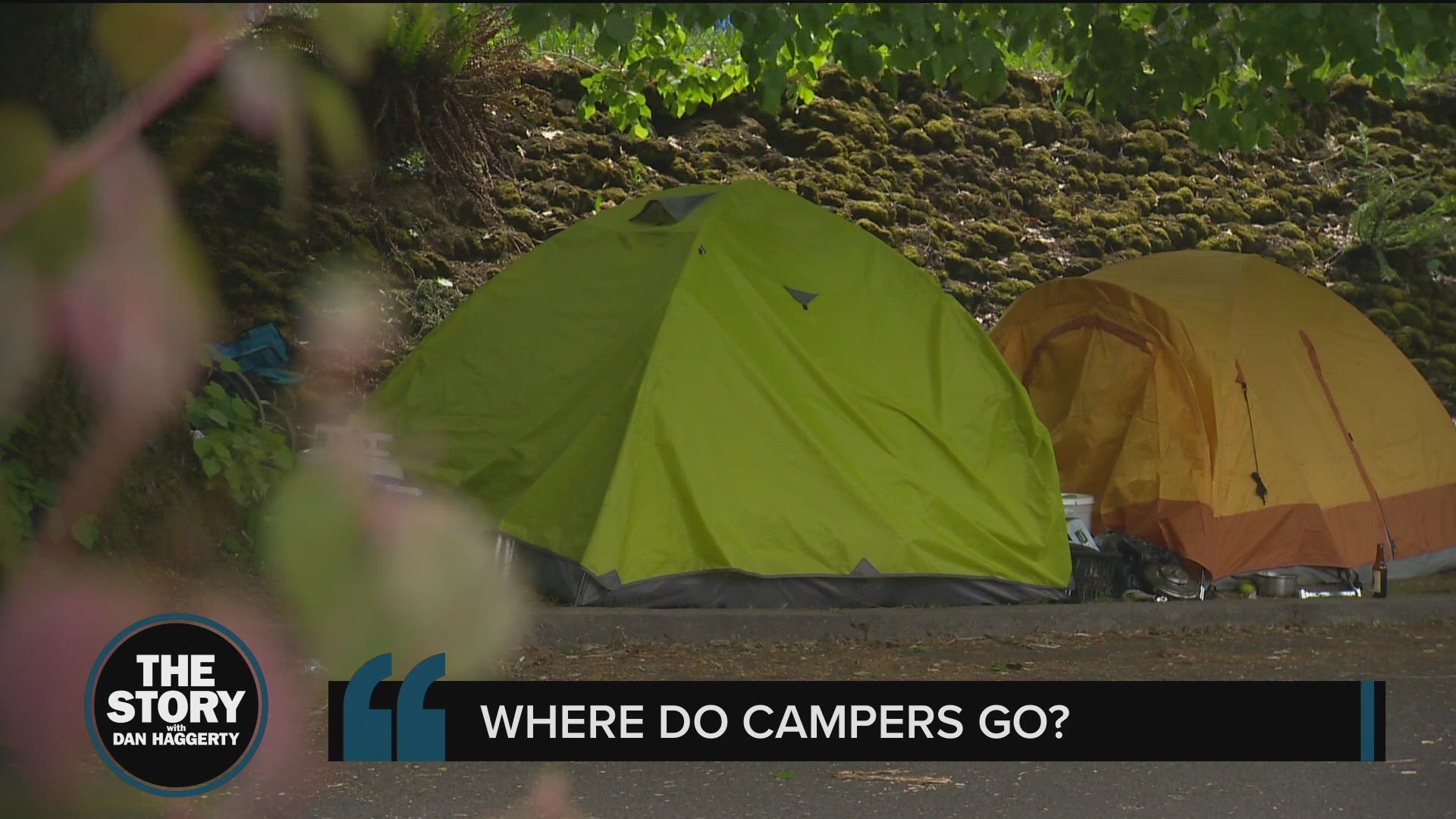 PORTLAND, Ore — After largely halting the practice during the COVID-19 pandemic, the city of Portland announced that starting May 24, crews would begin clearing more homeless camps.

Before the pandemic, the city cleared about 50 camps per week, but after COVID arrived that number dropped to about five camps per week. As of Wednesday, 13 camps in Portland are slated to be cleared.

A viewer of “The Story with Dan Haggerty” named Andrew wrote to us with a question: “I am curious as to where did the people in the 50 sweeps per week go. Also when they call it a sweep, what is the average number of campsites involved?”

Where do the campers go?

We took this question to two people who are very informed on the topic.

First, Gary Barker, who is the lead ambassador for the newspaper, Street Roots. He spent roughly a decade on the streets of Portland and his camps were cleared many times. He has housing now.

“Some people do go to a shelter, but most of them don’t because the shelter system is so rigid. It doesn’t fit the makeup of people today. Nobody wants to be told what to do or told what time to lay in bed. It’s just too rigid,” said Barker. “The only shelter that I’ve been to that I appreciate to this day was Do Good Multnomah. They have a very low barrier shelter and they work with you to get ahead. They assign a case manager with you. And they’re really laid back and they don’t force themselves. They let you think about it. You can lay there and sleep if you want to, but eventually you’re going to get tired of laying around and doing nothing, right?”

We also took this question to Kim James, who runs the street outreach teams with Cascadia Behavioral Healthcare. Each team of two people goes out at least five days per week and talks to people living in camps, often just before the camps are cleared. The teams make contact with hundreds of people each year.

James has a different take on where people go when the camps are cleared. She says many people take advantage of programs and end up being placed into some sort of housing.

“As of our last reported, we were over 68% of individuals who decided to take advantage of the opportunities through either our intensive street engagement program or our mental health street outreach program,” James said. “While it is not an overnight phenomenon, it does happen and we work with an individual who is able to work their way back into the system and once they decide, even after they decide, wrap-around services are there, so our goal is to not only house new people but keep those who we have housed inside.”

James says outreach teams continue to work with people until they are ready to move inside.

How many campsites are involved in a sweep?

The term “sweep” has traditionally referred to crews clearing just one camp, which can include many tents.

The city refuses to call them “sweeps”, opting for “removals” instead.

Some people, including Barker, believe “sweeps” is disrespectful.

“The actions that come with it are somewhat inhumane to me,” Barker said. “Because when you take another human being and treat them that way, like disrespectful and rude, and just take all their belongings that they own in the whole wide world and dispose of them, and tell them that they’re going to get them back, which you don’t, you never see it again, it leaves you kind of frustrated and angry, and it tears at your self-esteem. It makes you feel less than or different than.”

Others, however, believe the word “sweeps” is appropriate because they believe the process is inhumane and using nicer verbiage to hide that doesn’t make sense.