'We won't stop': Petition made to change Jim Ned CISD dress code after fifth grader gets in trouble for earrings

Ryan Outlaw was sent to in-school suspension after he was asked to take out clear spacers in his piercings. His parents are working for a more inclusive dress code. 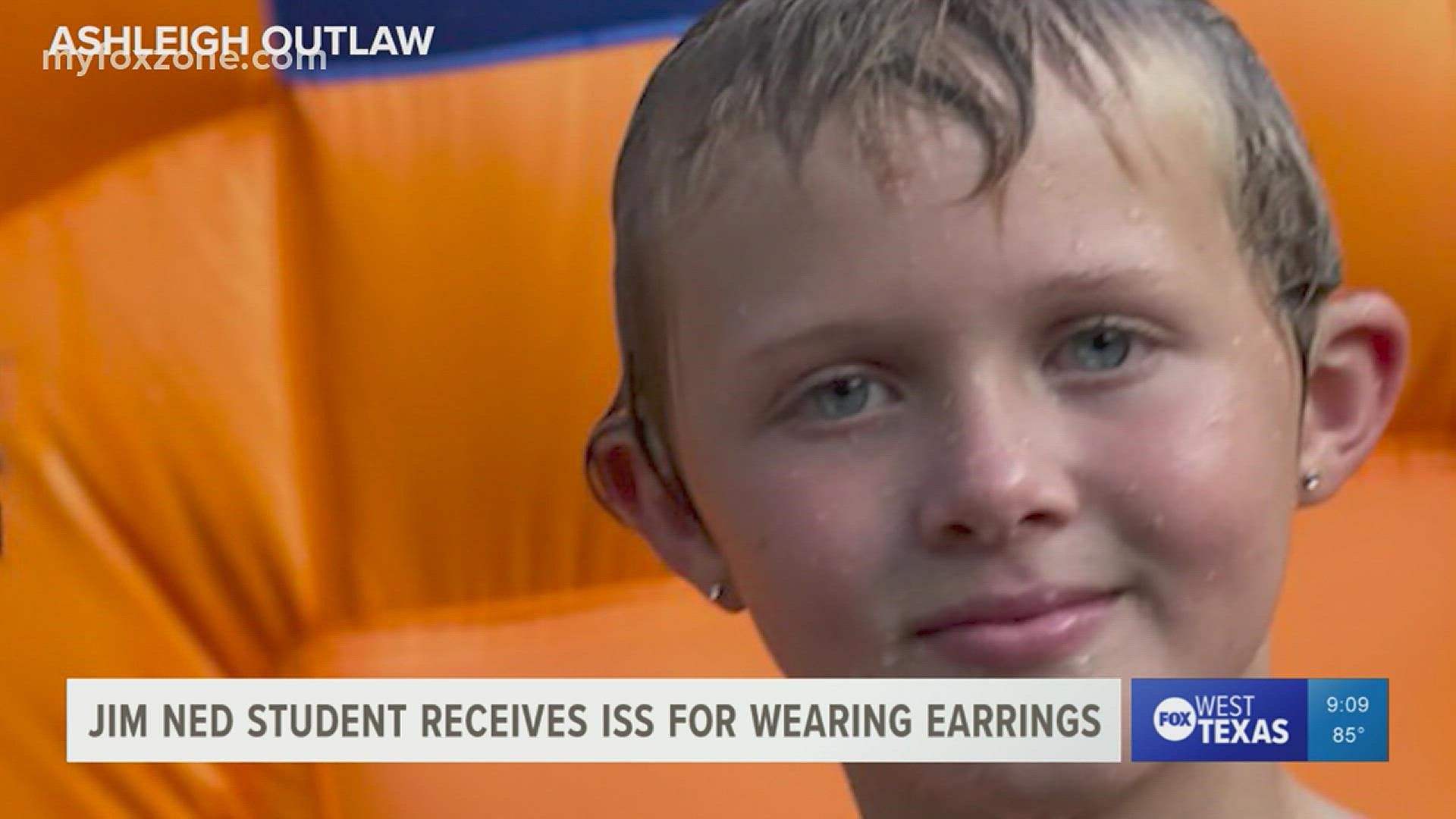 This summer Ryan was so excited. His parents allowed him to get his ears pierced. He decided he wanted them because his uncle who plays football for Abilene had them done and he wanted to be like him.

Ryan's parents, Cody and Ashleigh Outlaw, knew the dress code did not allow boys to wear earrings, but they thought he wouldn't be an issue as it would not cause class disruption. The first day of school, a teacher told Ryan he could not wear them.

"The principal called us on the first day of school and went ahead and told him take them out. After school you can put them back in," Cody said.

Ryan complied and came to school the next day wearing clear retainers, but teachers told him, he could not wear them either. Cody said the paper dress code the parents were sent said nothing about the retainers.

"They just called and said that his clear retainers can't be used. In the paper with the dress code they sent out, it doesn't say anything about clear retainers. And now magically their website shows it," Cody said.

Teachers asked Ryan to take out the retainers and Ryan refused. He was sent to ISS for a dress code violation.

"I said, 'Can someone explain to me how little girls can safely wear earrings to school, but little boys can't?' It doesn't make any sense. And so I got a lot of comments and a lot of people were agreeing with me. And I had some people suggest I start a petition," Ashleigh said.

The petition received a lot of attention. Then there was a counter-petition with the argument that the dress code should stand. Parents said the dress code teaches children to dress appropriately for the workforce. Ashleigh and Cody say the dress code is outdated and unfair.

In response, the school district sent out the following statement:

As many of you know, in the Jim Ned CISD we have a proper order and process for working through any concerns that a parent, student, or staff member may have with the district. While we do our best to remain aware of concerns expressed on social media, our district does not respond to or solve our problems through social media. Instead, we prefer to handle our concerns face-to-face. We like for that process to begin informally with a conversation in-person or by phone.

Many of you are aware of a couple of recent petitions and several social media comments regarding our Jim Ned CISD Dress Code. Some comments from Jim Ned parents speak to a few concerns with the Dress Code, but there is also significant support for the Dress Code as it currently stands for the 2021-22 school year. For everyone’s awareness, at the time this notification was written, no one has contacted the District to discuss any concerns associated with the recent petitions or social media posts.

We want to emphasize to all of our families that we take feedback from our parents, students, and staff seriously as it is received throughout the school year regarding our Student Code of Conduct and Student Handbook, which is where our Dress Code resides. In the spring of each school year, the administration considers all feedback throughout the year and then provides that same feedback to the Board of Trustees. For example, this past year the administration and board discussed Dress Code related information in the March board meeting. Recommendations regarding any changes are presented to the Board for consideration at that time. If the Board deems revisions necessary, the Board will direct administration at that time to make the necessary changes which is then reflected in the following school year's Student Code of Conduct and/or Student Handbook.

We greatly appreciate all of our Jim Ned community and we realize that we will not always agree on every item in the Dress Code. While we work to find common ground on these issues, just know that we have to draw a reasonable line somewhere. And our community can trust that the right people are in place to make those reasonable decisions. You can also trust that your feedback is considered respectfully on an annual basis by the district’s leadership.

Thank you for your continued support of our wonderful Jim Ned community. Roll Tribe!

The school district said the parents should have gone to the administration instead of social media, but Ashleigh said that way would have gotten them nowhere.

"I've been intimidated in principals' offices for as long as I can remember. And I know what the outcome would have been had I gone that way," Ashleigh said.

This is not the first time there has been push back on a school dress code in the Big Country. Last spring, Clyde ISD changed its dress code after high school student, Trevor Wilkinson, got into trouble for his nail art at school. Wilkinson has been in contact with Ashleigh, giving support and advice.

"I reached out to her and I gave her the ACLU's contact that worked with me on my case. And I've kind of been like trying to guide her through it a little bit so that she knows what path to take and I really hope it works," Wilkinson said.

For now, Ashleigh and Cody are trying their best to advocate for their son.

"We won't stop until we've done all we can," Ashleigh said.