Throughout the video, vulgar language and taunts can be heard that were directed toward the officers. 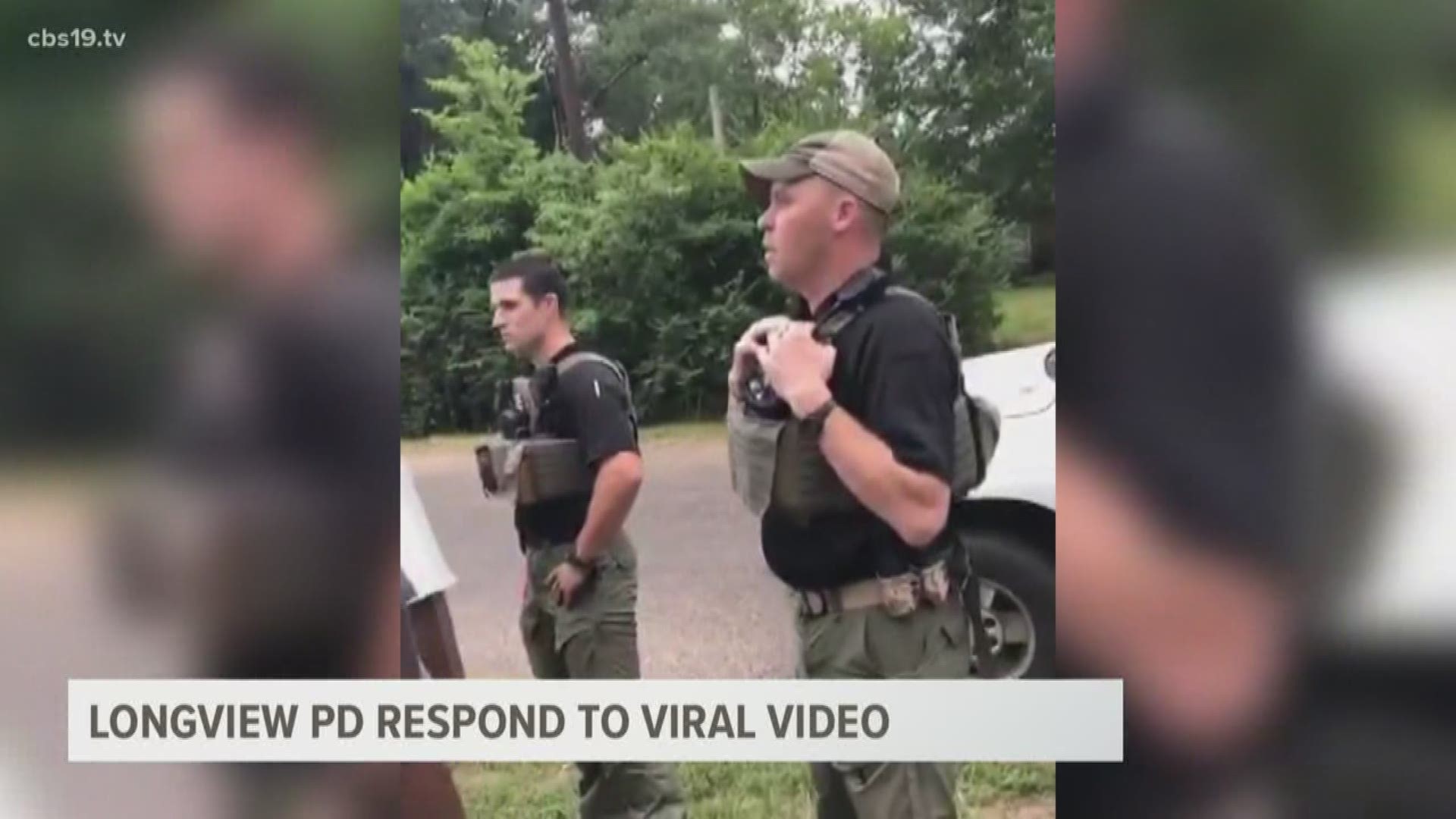 LONGVIEW, Texas — A video involving a heated situation with Longview police officers and a group has gone viral with more than 2 million views after it was shared to Facebook over the weekend.

The original video, an Instagram live, was taken when a crowd of people came outside near the 800 block of Hutchins St., after an officer made a traffic stop.

“A small group started to form and that’s when the issues started to arise,” said Longview Police Department Chief Mike Bishop. “So, they called for some backup units to come and assist.”

Chief Bishop says around seven or eight officers were called to the scene. Officers can be seen arriving during the eight-minute video.

“The other officers were trying to, you know, address the issues with the crowd while the [original] officer could still perform his duties,” Chief Bishop explained.

Throughout the video, vulgar language and taunts can be heard that were directed toward the officers. Many of the officers appear to not respond, except, at times, telling people to move back.

At one point, a Black man walked toward a White officer and began pointing at him. Words were exchanged between both men, but neither touched each other.

“There's a lot of uneasiness right now,” Chief Bishop said. “I'm sure that kind of kind of played into it. But our officers recognized what it was and handled it in the appropriate fashion.”

The video comes at a time of tension as Black Lives Matter protests have been continuously happening in the East Texas area after the deaths of George Floyd and Breonna Taylor.

“I feel really good about the way the officers handled this,” said Chief Bishop. “One of the things that I express with our officers is that we need to be professional when we’re providing police services, and this was a great example of what our officers did out there.”

No citations were issued, but the driver involved in the traffic stop was given a warning.

“I have viewed this circulating Instagram video multiple times. Of course I know all of the officers in that video. I have known almost every single one of them since they began their careers at Longview PD, and can say without fear of contradiction that they are ALL good upstanding individuals. With them being good people, I can also say they are ALL also great police officers. This is a group of officer’s show what many officers have to endure while simply doing their jobs while doing it the right way. I applaud their restraint, self discipline, and professionalism.

"On the other hand! This group of people that they were dealing with DO NOT represents neither me nor any of us that are trying to move in a progressive direction. And honestly it pissed me off the level of ignorance that was displayed. Progress cannot productively be accomplished with this type of behavior. To point your finger in another man face is BEYOND disrespectful. I really hate the fact that “we” hate for the “N” word to be used towards our people yet it was used Lord knows how many times in this video. If the mission of this video was to make the police look stupid, the mission FAILED terribly. All it did was show this small group of people acting a DAMN fool (inserted intentionally).

"Furthermore, the racial comments are just as wrong. There is no need to lump all of Black America together for this group is not US. Most of us do not act in this behavior, but I feel that goes without saying. In my personal opinion many of those comments came from people that no matter how black people act you would still make such ignorant, racial, and divisive comments. Please not at a time like this none of this is needed, nor is it helping our current climate.

"In conclusion, if wrong is done I believe I have proven that I will be one of the first to call it out. That’s on either end of the spectrum. How about EVERYBODY just do the right thing? Despite race, color, political affiliation, sexual orientation, or religious belief (if any at all) we all have a part to play in bridging this entire community together.”