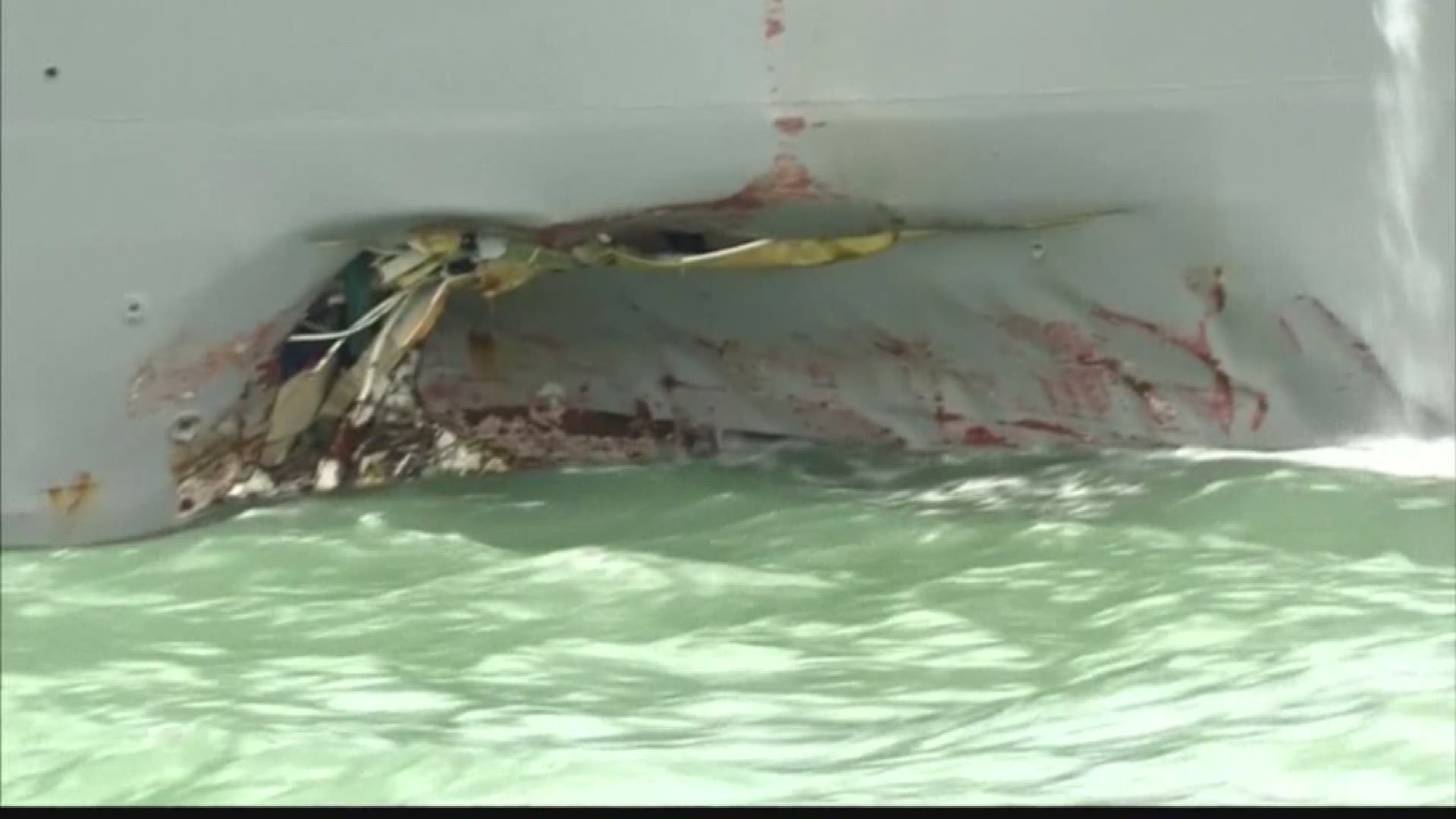 The guided-missile destroyer USS John S. McCain (DDG 56) arrived at Singapore’s Changi Naval Base on Monday, hours after colliding with an oil tanker and leaving 10 sailors missing and five injured.

The U.S. Navy said the ship has “significant damage” to its hull, which flooded areas including crew berths, machinery and communications rooms.

The vessel collided with Alnic MC, a 600-foot Liberian oil and chemical tanker, east of the Straits of Malacca and Singapore at about 6.30 a.m. Japan Standard Time, the U.S. Navy's 7th Fleet said in a statement. The Greek-owned tanker is about three times the size of the McCain, the Navy Times reported.

Zulkifli Abu Bakar, the head of Malaysia’s Maritime Enforcement Agency, said the collision occurred in one of the world’s busiest shipping lanes, 4.5 nautical miles from Malaysia’s coast. Both Malaysia and Singapore say the crash happened in their waters.

A Singapore Armed Forces helicopter evacuated four of the injured sailors to a hospital in Singapore with non-life threatening injuries, the Navy said. The fifth sailor did not need further medical treatment.

A search and rescue effort is underway involving Singapore, Malaysia, Indonesia and the U.S.

An official database for ports in Asia showed the Alnic MC had one document deficiency, one fire safety deficiency and two safety of navigation problems when it was inspected in the Chinese port of Dongying on July 29, the Associated Press reported. The problems were apparently not serious enough for it to be detained by the port authority.

The incident represents the second serious collision for a Navy vessel in two months. The USS Fitzgerald collided with a freighter off the coast of Japan on June 17, leaving seven sailors dead.

“This trend demands more forceful action, as such I direct an operational pause to be taken in all of our fleets around the world,” said Admiral John Richardson.

The U.S. Navy has ordered a broad investigation on the performance and readiness of the 7th Fleet.

“I will examine the process by which we train and certify our forces that are deployed in Japan to make sure we do everything we can to make sure they are ready for operations and warfighting,” said Richardson.

In Norfolk it was a somber homecoming Monday.

“As joyous as our reunion was today our sadness is just as low as we think about those sailors,” said Captain Kenneth Whitesell.

The Navy last week relieved the Fitzgerald's skipper and two top sailors of their command for losing "situational awareness" in the hours leading up to the collision. About a dozen sailors in all are facing some punishment, including all of the destroyer's watch, the Navy said.

The USS John S. McCain has played a small role in recent tensions with North Korea, carrying out a "freedom of navigation operation" on Aug. 10, when it sailed to within 12 nautical miles of Mischief Reef, an artificial island built up by China in the South China Sea, the Navy said earlier this month.

The ship is named after John S. McCain Sr. and John S. McCain Jr., Navy admirals who were the grandfather and father, respectively, of Sen. John McCain of Arizona.

Sen. McCain tweeted that he and his wife were "Keeping America's sailors aboard the USS John S. McCain in our prayers tonight — appreciate the work of search & rescue crews."

Cindy & I are keeping America's sailors aboard the USS John S McCain in our prayers tonight - appreciate the work of search & rescue crews https://t.co/jzk9giXbfg

Commissioned in 1994, the USS John S. McCain, like the Fitzgerald, is part of the Navy's 7th Fleet. Built at Bath Iron Works in Maine, it is part of the U.S. Navy's forward-deployed naval forces; its home port is Yokosuka, Japan.

President Trump, asked about the incident as he returned to the White House from a two-week working vacation on Sunday, said, "That's too bad."

A couple of hours later he tweeted that his "thoughts & prayers" were with the crew of the ship.

Thoughts & prayers are w/ our @USNavy sailors aboard the #USSJohnSMcCain where search & rescue efforts are underway. https://t.co/DQU0zTRXNU