Biden's best bet to achieve unity may be to get real results with the coronavirus pandemic and the economy. 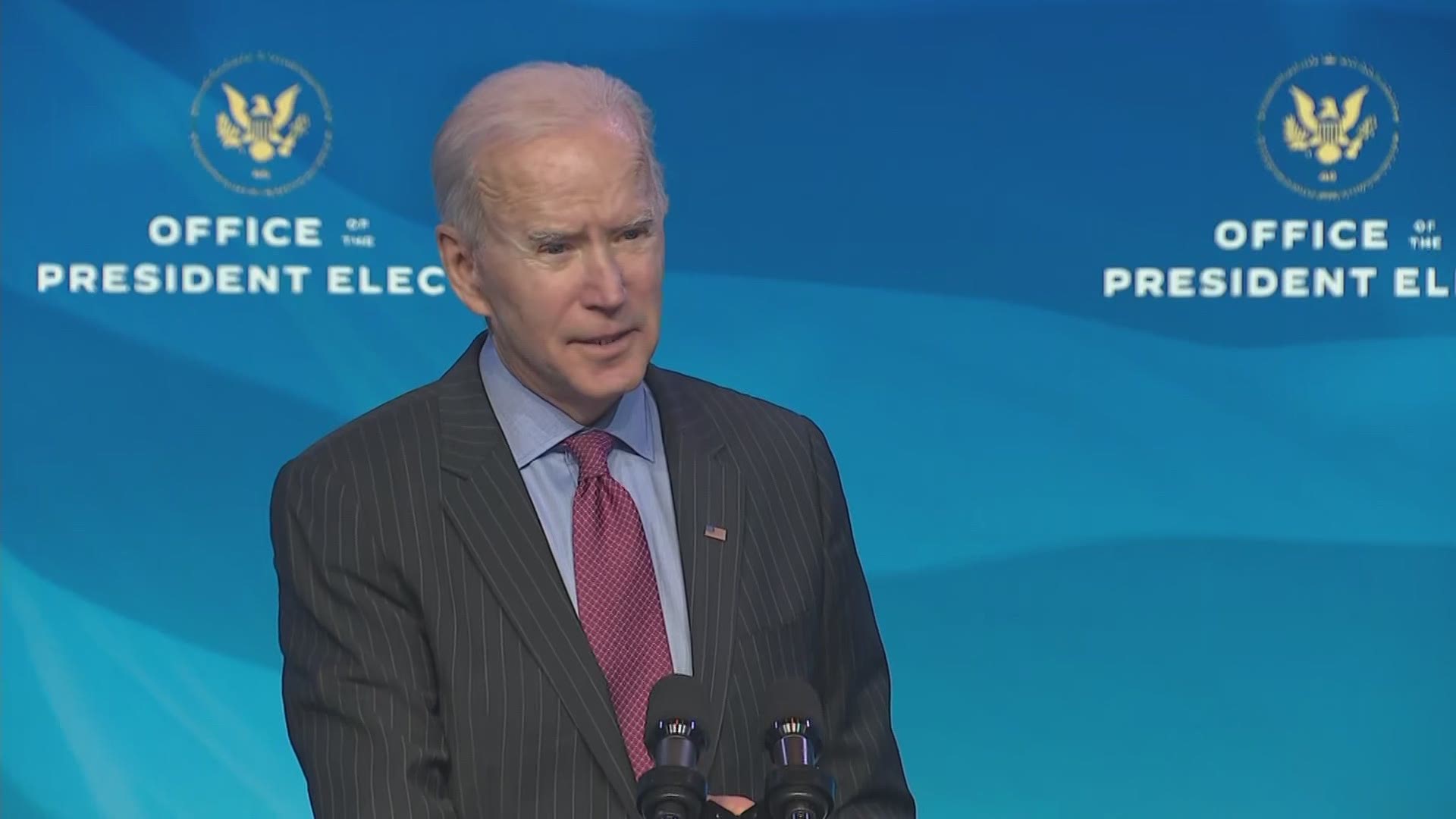 President-elect Joe Biden appeared on television last week as a bipartisan group of lawmakers huddled in an undisclosed location to protect them from a violent mob that was ransacking the U.S. Capitol.

"The whole room went silent," Sen. Amy Klobuchar, D-Minn., recalled as everyone listened to Biden denounce the insurrection and call for calm.

The respectful manner in which the lawmakers listened to Biden during one of America's darkest moments gave Klobuchar hope that the new president has an opportunity to guide the country past the tumultuous final stretch of Donald Trump's presidency.

That's quickly becoming one of Biden's top tasks as he prepares to take office on Jan. 20. It's an immensely complex challenge, requiring him to balance demands for accountability after Trump incited the riot against those who worry about further dividing the country.

Any misstep could not only intensify the nation's polarization, but threaten Biden's ability to win quick congressional approval of his Cabinet picks and other priorities such as coronavirus response legislation.

For now, Biden seems content to leave decisions about Trump's fate to Congress.

Two Republican senators, Lisa Murkowski of Alaska and Patrick Toomey of Pennsylvania, have called on Trump to resign.

Absent that, House Democrats are moving quickly to introduce articles of impeachment on Monday and vote as soon as Tuesday. That would give an outlet for lawmakers to formally condemn Trump, but would delay a Senate trial until after Biden addresses other priorities during his first 100 days.

Biden essentially framed his presidential campaign as a response to Trump, pledging to "restore the soul" of America. He has said he decided to seek the White House after watching Trump say there were "very fine people on both sides" of a deadly white supremacist rally in Charlottesville, Virginia.

Still, the insurrection sharpens the debate over how to break with the Trump era.

Many Democrats say the best way for Biden to unify the nation and restore faith in government is to achieve tangible results on issues that matter to all Americans, including the coronavirus pandemic and the economy.

Steve Israel, a former New York Democratic congressman, said that in his experience in Congress, when lawmakers "sense that things are going too far, you want to take a few steps back."

"I think that there are a lot of Republicans now who are going to want to take a few steps back towards the middle," he said.

But he also emphasized that if Biden hopes to move past Trump, he'll need to move fast to show that bipartisan action is possible.

"If President Biden tests the appetite of Republicans to try and get a quick and substantive win on a COVID relief package, or perhaps infrastructure investments, that will send a message to the entire country that bipartisanship and healing is possible," he said.

Biden will also have to navigate a number of ongoing investigations into Trump's actions during the U.S. Capitol breach and in trying to pressure state officials to overturn the results of the election in his favor.

He has repeatedly said that his Justice Department will remain entirely independent and that he won't interfere in any ongoing investigations into his predecessor.

Democrats say that's exactly the tone they'd like him to take. But it's also important, as Vermont Sen. Patrick Leahy put it, to hold those involved in the events of this week accountable.

"There were an enormous number of crimes, felonies, that were committed. We have to make sure those are handled," he said. "If we just totally ignore it, we tell everybody else you can commit any crime you want because the Congress will ignore it."

So far, at least 90 people have been arrested on charges ranging from misdemeanor curfew violations to felonies related to assaults on police officers, possessing illegal weapons and making death threats against House Speaker Nancy Pelosi of California.

While Democrats emphasize that they want Biden to focus on the issues confronting his administration and not the investigations into his predecessor, they also say it's important to address the systemic issues again laid bare by the unequal police treatment of the violent Capitol rioters.

Many have noted that the police presence and response to the largely white mob was far smaller and less aggressive than that seen at a number of peaceful Black Lives Matter protests where the crowd was much more diverse. It's important, said Democratic strategist Karen Finney, for Biden to acknowledge that.

"This is who we are but it's not who we have to be," she said. "If that's the message, it would be a powerful one to try to start to bring us together."

The last time the nation faced such serious questions about how a new president would respond to the actions of his predecessor was in 1974. Gerald Ford assumed the presidency after Richard Nixon resigned in disgrace over his role in the Watergate break-in.

Ford ultimately pardoned Nixon, a move that was initially deeply unpopular but was later viewed as an important step toward healing.

Historian Mark Updegrove, the president and CEO of the LBJ Foundation, said that because of the magnitude of Trump's actions — and the fact that the country is far more divided over his presidency than they were on Nixon's — it's better for Biden to stay away from any actions taken against Trump once he leaves office.

"Richard Nixon, while he lied to the American people and participated in obstructing justice in the Watergate investigation, he did not orchestrate an insurrection on our Capitol and try to overturn the election," he said.

"Biden has to be very conscious of dealing with President Trump," Updegrove continued. "I think it's probably rightfully left in the hands of Congress right now, and the judicial branch."

Klobuchar will play a leading role into a bipartisan investigation into what went wrong at the Capitol, and said whatever her team finds, it will be up to the Justice Department to decide how to act.

But the senator said the inauguration itself may offer the most important opportunity for Biden to set a forward-looking tone.

"I can't think of another year that the peaceful transition of power was more important than this one," she said.