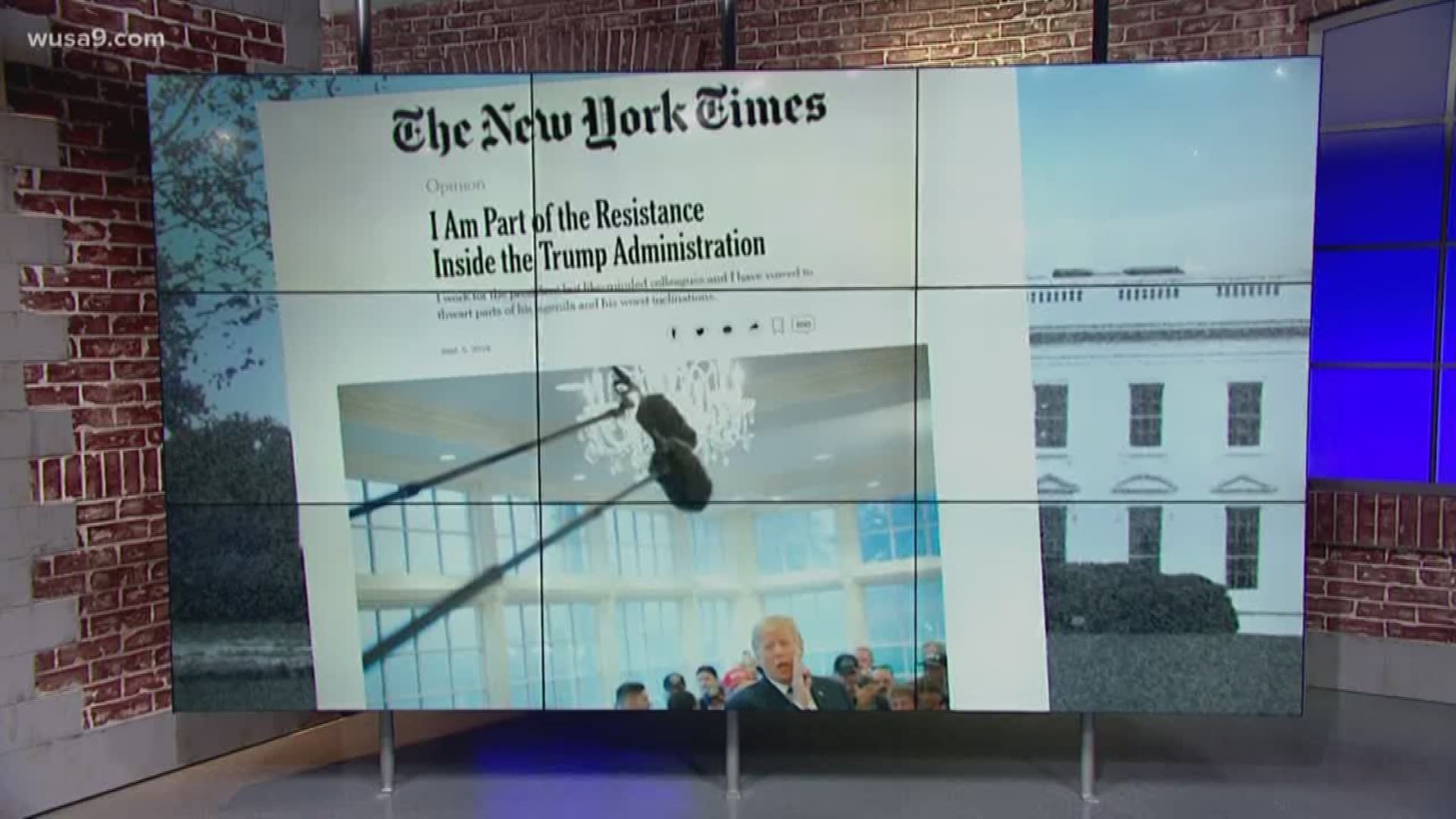 A former Trump administration official who penned a scathing anti-Trump op-ed and book under the pen name “Anonymous” revealed himself Wednesday as a former chief of staff at the Department of Homeland Security.

The official, Miles Taylor, said in a tweet six days before Election Day that Donald Trump is “a man without character” and “it's time for everyone to step out of the shadows.”

Taylor has been an outspoken critic of Trump's in recent months and had repeatedly denied he was the author of the column — even to colleagues at CNN, where he has a contributor contract. He left the Trump administration in June and endorsed Democrat Joe Biden for president this summer.

In a statement, White House press secretary Kayleigh McEnany called Taylor a “low-level, disgruntled former staffer” who "is a liar and a coward who chose anonymity over action and leaking over leading.”

“This is everything people hate about Washington — two-faced liars who push their own agendas at the expense of the People,” she later tweeted. "This is the epitome of the swamp!"

Taylor’s anonymous essay was published in September 2018 by The New York Times, infuriating the president and setting off a frantic White House leak investigation to try to unmask the author.

In the essay, the person, who identified themselves only as a senior administration official, said they were part of a secret “resistance” force out to counter Trump’s “misguided impulses” and undermine parts of his agenda.

The author wrote, “Many Trump appointees have vowed to do what we can to preserve our democratic institutions while thwarting Mr. Trump’s more misguided impulses until he is out of office.”

The Times identified the author as a “senior official” in the administration and received some criticism online Wednesday for inflating Taylor's credentials. The newspaper, which said it had granted Taylor anonymity because his job would be jeopardized if his identity was revealed, on Wednesday confirmed Taylor was the author because he has waived his right to confidentiality, and had no other comment.

RELATED: More than 73 million Americans have already voted by mail or in person

The allegations incensed the president, bolstering his allegations about a “deep state” operating within his government and conspiring against him. And it set off a Beltway guessing game that seeped into the White House, with current and former staffers trading calls and texts, trying to figure out who could have written the piece.

Trump, who had long complained about leaks in the White House, also ordered aides to unmask the writer, citing “national security” concerns to justify a possible Justice Department investigation. And he issued an extraordinary demand that the newspaper reveal the author.

Instead, the author pressed forward, penning a follow-up book published last November called “A Warning” that continued to paint a disturbing picture of the president, describing him as volatile, incompetent and unfit to be commander in chief.

To a certain extent, he's since been overshadowed by other former government officials, both during the impeachment hearings and after, who went public condemning Trump's behavior with their names attached.

Taylor’s behavior also leaves questions for CNN. He was asked directly by the network's Anderson Cooper in August whether he was “Anonymous” and answered: “I wear a mask for two things, Anderson, Halloween and pandemics. So, no.”

“I wear a mask for two things, Anderson: Halloween and pandemics. So, no,” says @MilesTaylorUSA, when asked by @AndersonCooper if he is the author of the op-ed book written by someone called Anonymous. pic.twitter.com/sPjs4OoAnp

Josh Campbell, a national security correspondent for CNN, tweeted that he had also asked Taylor if he was “Anonymous” and was told no.

In an essay published Wednesday on Medium.com, Taylor said he published the op-ed and book anonymously because he wanted the focus to be on the arguments, instead of who was writing them.

“We got the answer,” he wrote. “He became unhinged. And the ideas stood on their own two feet.”

Taylor said the nation could no longer rely on bureaucrats to steer Trump toward what's right since “he has purged most of them anyway.”

“He doesn't deserve a second term in office,” he wrote, “and we don't deserve to live through it.”

Former GOP consultant Reed Galen, one of the founders of the anti-Trump group The Lincoln Project, tweeted that Taylor “isn’t a hero.” He added: “He sat in those rooms, in those councils of power and allowed the banality of evil to work. ... Heroism isn’t silence until it’s convenient and personally advantageous to stand up.”