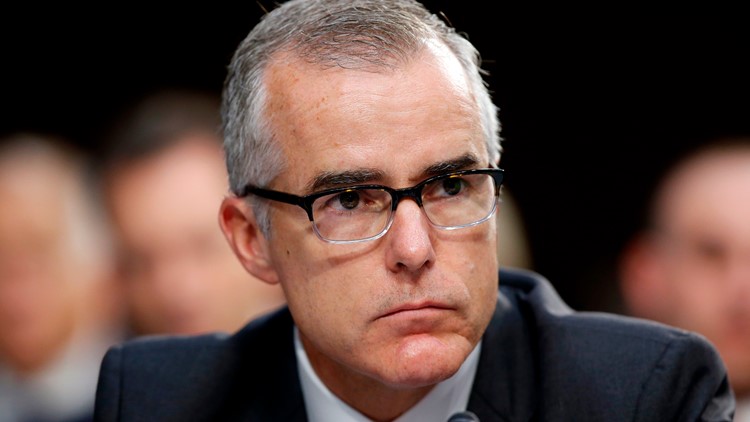 McCabe, an ex-FBI official targeted by Trump, not charged

WASHINGTON — The investigation of former FBI Deputy Director Andrew McCabe has been closed, and he will not be charged.

The investigation focused on whether he lied to federal officials about his involvement in a news media disclosure. That's according to a statement from McCabe's legal team on Friday.

The decision resolves a criminal investigation that spanned more than a year and began with a referral from the Justice Department's inspector general, which said McCabe repeatedly lied about having authorized a subordinate to share information with a newspaper reporter for a 2016 article about an FBI investigation into the Clinton Foundation.

McCabe was fired in March 2018. In the past, he has denied any wrongdoing and said that when he felt his answers were being misunderstood, he tried to correct them.

RELATED: Ex-FBI official: 'Crime may have been committed' by Trump

Back in August, McCabe sued the FBI and the Justice Department over his firing.

The lawsuit says the firing was part of Trump's plan to rid the bureau of leaders he perceived as disloyal to him. The complaint contends that the two officials responsible for demoting and then firing McCabe — FBI Director Chris Wray and former Attorney General Jeff Sessions — created a pretext to force him out in accordance with the president's wishes.

"Trump demanded Plaintiff's personal allegiance, he sought retaliation when Plaintiff refused to give it, and Sessions, Wray, and others served as Trump's personal enforcers rather than the nation's highest law enforcement officials, catering to Trump's unlawful whims instead of honoring their oaths to uphold the Constitution," the lawsuit says.