Security footage from the day of the U.S. Capitol riot showed hero officer Eugene Goodman running toward Romney to warn him that the Capitol had been breached.

WASHINGTON — During the impeachment trial of former President Donald Trump on Wednesday, Democrats revealed new footage of a U.S. Capitol Police officer hailed for his heroism during the Jan. 6 insurrection, this time directing Sen. Mitt Romney to turn around and head in the opposite direction of rioters storming the building.

The response under fire of Eugene Goodman and other officers during the Jan. 6 attack was central to the arguments made by impeachment managers seeking a conviction against the former president. In the footage, Romney is seen walking toward the rioters until an officer turns him around and he runs in the other direction.

“I was very fortunate indeed that Officer Goodman was there to get me in the right direction,” Romney told reporters later.

Wearing a suit and tie and a mask with a blue line, Goodman stood inside the U.S. Senate chamber, watching as the footage was shown of his efforts to save lives.

“As we all know now, but for the heroism of Capitol Police Officer Eugene Goodman and other law enforcement officers who took (rioters) in a different direction to the police line, they very likely would have gotten here,” said Rep. David Cicilline of Rhode Island, one of the impeachment managers.

The managers played audio and video, some never before heard or seen publicly, of badly outmanned officers trying to delay or misdirect rioters, some of whom themselves were from other law enforcement agencies. In calls made to dispatchers, officers are heard pleading for help, the desperation in their voices clear.

“We have been flanked and we’ve lost the line,” one officer is heard saying.

Several investigations are underway to determine why agencies left law enforcement undermanned and unequipped despite weeks of warnings of violence from far-right and white supremacist groups. Capitol Police Chief Steven Sund resigned the day after the riots and Acting Chief Yogananda Pittman faces a no-confidence vote from her rank and file.

Capitol Police Officer Brian Sicknick died after the attack, one of five people to be killed.

Goodman became a national hero after video shot by HuffPost reporter Igor Bobic showed his response to rioters climbing the stairs near an entrance to the U.S. Senate chamber. With no other officers to be seen, he takes a half step to his left at the top of the stairs, then walks to the right, away from the chamber. The mob follows him into a room where other officers wait.

Goodman has not spoken publicly about his actions that day. He escorted Vice President Kamala Harris to her place at the inauguration ceremony two weeks after the attack.

Other videos shown Wednesday depict officers pushing back in vain against rioters intent on stopping the certification of President Joe Biden's victory over Trump. 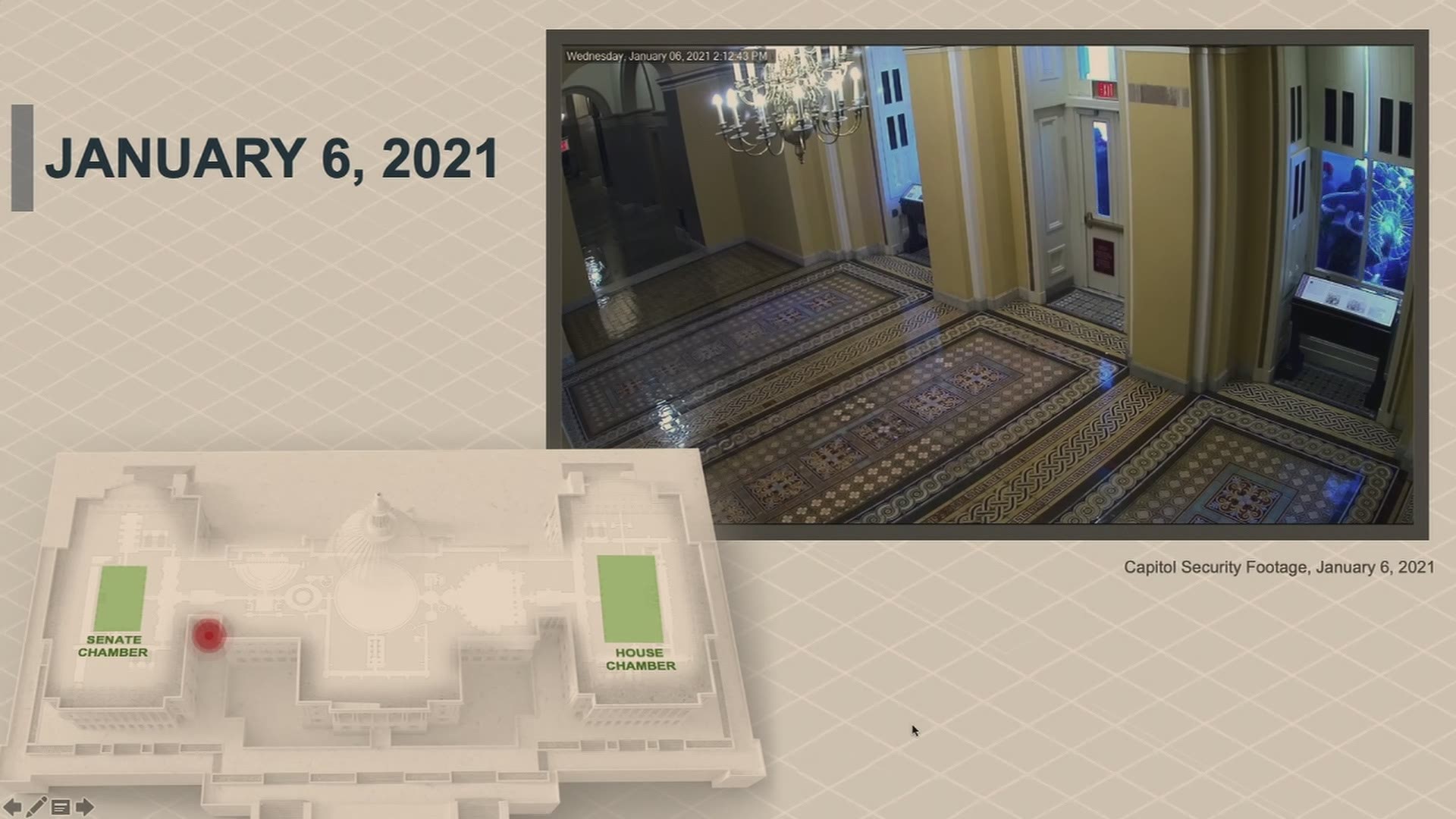 Speaking during a break in Wednesday’s proceedings, Romney said seeing the images of police officers fighting off violent insurrectionists brought tears to his eyes. “That was overwhelmingly distressing and emotional,” he said.

Asked about the video in which Goodman tells Romney to turn around, the senator said he didn’t know the identity of the officer before.

“I look forward to thanking him when I next see him,” he said.