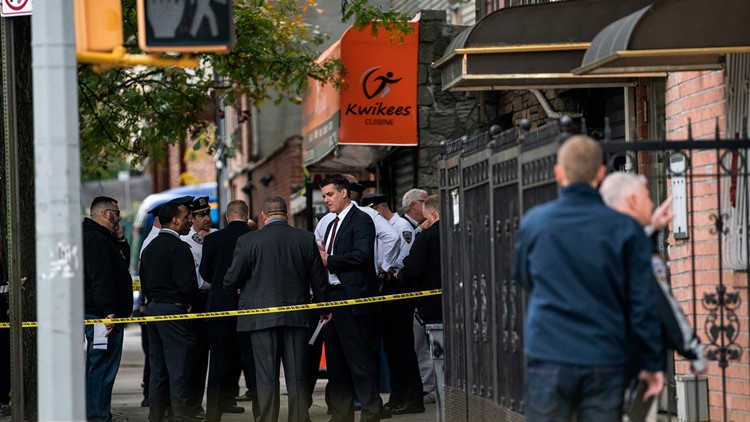 Photo by: AP
NYPD investigates the scene of a shooting in the Brooklyn borough of New York on Saturday, Oct. 12, 2019.

4 dead in shooting at illegal gambling site in Brooklyn

The shooting inside the small, nondescript club started just before 7 a.m. as around 15 people were gambling with dice and cards, police said.

At a news conference hours later, Chief of Detectives Dermot Shea said investigators were trying to determine if a gambling dispute, a robbery, or something else was to blame for the violence.

"A bit of a chaotic scene," Shea said.

Two handguns were recovered. Multiple shots were fired and police didn't immediately say how many people might have been shooting.

The victims, who have not been identified, ranged in age from 32 to 49, Shea said. Two may have lived out of state and the rest were from neighborhoods throughout Brooklyn.

All of the people shot were men, save for one wounded woman. The injured were expected to survive. One additional person was hurt fleeing.

No one was immediately charged in the shooting, but police were questioning survivors and reviewing security camera footage.

"We have some individuals back at the 77th Precinct and we're trying to piece together exactly what transpired in that location," Shea said.

RELATED: 5 rappers removed from NYC festival at request of police over safety concerns

The unlicensed club, adorned with a sign identifying it as the "Triple A Aces Private & Social Event Space," was operating on the first floor of an older wood-frame townhouse on a block with some empty storefronts and boarded-up buildings.

Isaac Mickens, a community organizer, described the place as a "hole-in-the-wall gambling den" in an interview with The New York Times. "It was real tight, real small, casual, low-key," Mickens said. "A little hangout spot."

Mickens said that when he headed toward the club after the shooting he saw people running and screaming, "Oh God! Oh God!"

The local police precinct headquarters is two blocks away. Officers had not previously received any complaints about the location, Chief of Patrol Rodney Harrison said.

Shea said there was no immediate sign that the shootings had any connection to gangs, which have been a problem in that part of Brooklyn.

Crime scene tape surrounded the building Saturday morning and investigators in white jumpsuits could be seen going in and out.

The shooting was the second mass killing in New York in a week. Four homeless men were beaten to death , allegedly by another homeless man, on Oct. 5 in Manhattan's Chinatown.

Until those killings, the city had been on pace to challenge its post-World War II record for the fewest homicides. Last year it had fewer than 300 in a city of more than 8.5 million people.

"I've said it before and I'll say it until I can't anymore: we have an epidemic of gun violence that spares no community — and it won't stop until we get guns off our streets once and for all," he said.

RELATED: New York to be 1st to require disclosure of tampon materials