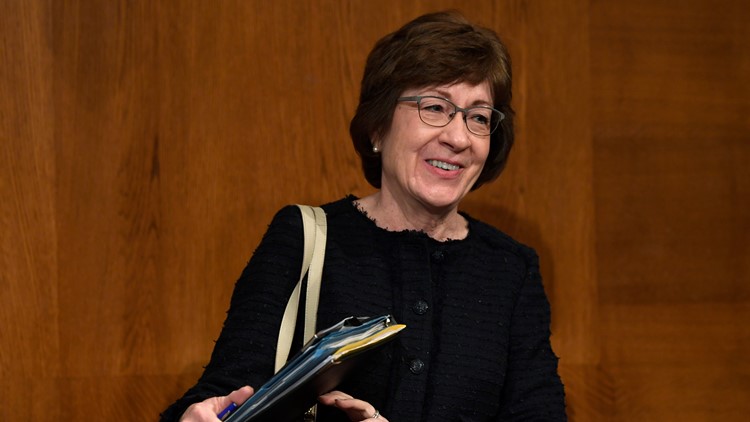 Photo by: AP
Sen. Susan Collins, R-Maine, talks with a colleague at the end of an executive session of the Senate Health, Education, Labor and Pensions Committee on Capitol Hill in Washington, Tuesday, Sept. 24, 2019. The committee voted to advance Scalia's nomination to the full Senate for consideration. (AP Photo/Susan Walsh)

LEWISTON, Maine — Republican Sen. Susan Collins has a well-funded Democrat prepping to challenge her next year. She has national women’s groups ready to attack her over her vote for Supreme Court Justice Brett Kavanagh. And she’s a moderate facing an electorate that increasingly prioritizes purity.

Still, the four-term Maine senator’s biggest hurdle to reelection may be the president of her own party.

President Donald Trump’s potential impeachment in the House and subsequent trial in the Senate presents a distinct dilemma for Collins. Of the handful of Republicans senators facing reelection next year, she has done perhaps the most to keep a clear distance from Trump. But as Democrats charge ahead toward impeachment, it looks increasingly likely that Collins will be forced to take sides in dramatic fashion. The senator, who has acknowledged she didn’t vote for the president in 2016 and still won’t say whether she will next year, may have to vote for him on the Senate floor.

“Susan Collins is in a terrible position,” said David Farmer, a Democratic operative in Maine. “The position that she’s in where she will likely to take a vote on whether to remove the president from office is going to inflame either the Democratic or the Republican base.”

Collins has kept mum on the House inquiry into whether the president abused his power by trying to get the president of Ukraine to investigate Democratic presidential candidate Joe Biden and his son, Hunter Biden, because of her potential role as an impeachment juror.

But she’s already shown a willingness to criticize the president on various issues. She said it was “completely inappropriate" for Trump to ask China to investigate the Bidens. And she said his decision to pull U.S. troops from the border in Syria and leave Kurds open to attack was “terribly unwise.”

Trump often lashes out at those who criticize him, even those in his own party, like Sens. Mitt Romney of Utah and Ben Sasse of Nebraska.

But he has not attacked Collins, yet.

Collins’ aides shrug off questions of how presidential politics could factor into her race, and the 66-year-old senator said she’s built her career on an independence valued by Mainers.

“I just have to run, should I decide to run, my own race. And that’s what I’ve always done regardless of who’s on the top of the ticket,” she told The Associated Press.

She has said she plans to formally announce whether she’s seeking reelection later this fall.

For her part, Gideon has been touting her progressive credentials in her fundraising, but she’s stopped shy of supporting Medicare for All or the Green New Deal, though she says climate change and universal health care are important to her.

She supports the Democrat-led impeachment inquiry — and accuses Collins of failing to stand up to Trump. “In the times that we’ve needed her the most, since (Trump) has become president, she’s not delivering for us,” Gideon told a gathering in Portland.

Gideon raised $1 million more than Collins in the most recent reporting cycle. But Collins has raised far more money — $8.6 million — the largest of any political candidate in Maine history. Pundits suggest upward of $80 million to $100 million could be spent on this race before Election Day 2020.

Democrats see an opportunity as Collins navigates a potentially precarious path in a fractured state where Trump is reviled in liberal, coastal communities and cheered in the conservative, heavily wooded north.

Try as she might, she won’t be able to avoid Trump, who’s expected to campaign in Maine, where he claimed one of the state’s four electoral votes in 2016.

Josh Tardy, a Bangor attorney and former Republican leader in the Maine House, said Mainers expect Collins to demonstrate “due diligence” on her constitutionally imposed obligations when it comes to impeachment.

But he downplayed the impact in her race.

“I think most people view this impeachment as partisan tit for tat. I don’t think that’s to drive the election needle one way or the other,” he said.

In Lewiston, a former mill town on the Androscoggin River, the senator’s challenges were clear even at a recent event hosted by the local chamber of commerce.

Collins appeared at ease as she handed out Halloween candy to children, posed for selfies and chatted with the adults. But some voters were less so.

Hillary Dow said she was “troubled” by a key vote that incensed Democrats — Collins’ support of Kavanaugh, who was accused of sexual assault during the Supreme Court confirmation process. But she said she continues to back Collins because of the bigger picture — her moderate views, her bipartisanship, her track record.

“I appreciate that she’s honest and fair, and she focuses on what really matters. She’s a good person,” she said.

But one man who sought out Collins for a photo later acknowledged he might not vote at all because he’s so frustrated with national politics.

“I’m not sure if I trust anyone anymore, as far as the politicians go,” said restaurant worker Craig Aleo. “It’s a tough world right now.”

Collins conceded it’s a difficult time for a politician who has made a career trying to broker legislative deals.

“The current environment is very disturbing to me. There’s a lack of focus on what we need to do for the American people, and instead the focus is on power struggles over who’s going to control what,” she said.

Collins hails from Caribou, in the conservative 2nd Congressional District that voted for Trump. That’s where her parents served as mayor, and where her family still runs the S.W. Collins hardware store.

Ousting Collins from Maine politics, where her roots run deep, is no small task.

Cynthia Noyes, who describes herself as “liberal in Republican clothing,” fears that her friend from high school is more vulnerable this election cycle. But the Caribou flower shop owner still supports Collins, and she hopes other independent-minded voters will support her as they have in the past.

“Do what’s right and you’ll be OK. Mainers are like that. If they think you’re doing the right thing, then you’ll be OK,” she said.