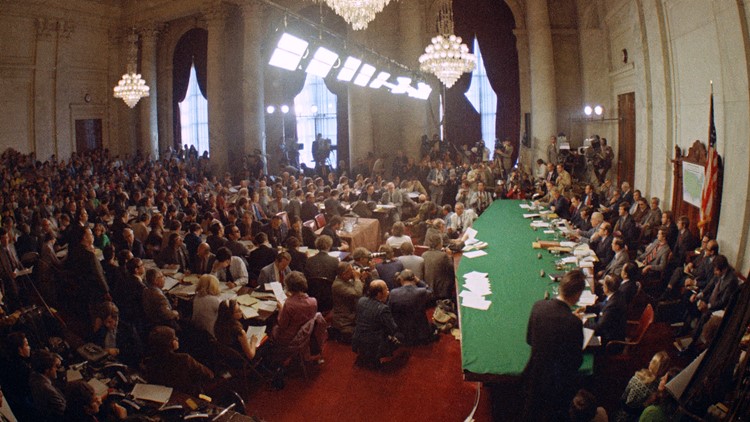 Photo by: AP
FILE - In this May 18, 1973, file photo, the hearing of the Senate select committee on the Watergate case on Capitol Hill in Washington. In 1973, millions of Americans tuned in to what Variety called "the hottest daytime soap opera" _ the Senate Watergate hearings that eventually led to President Richard Nixon's resignation. For multiple reasons, notably a transformed media landscape, there's unlikely to be a similar communal experience when the House impeachment inquiry targeting Donald Trump goes on national television starting Nov. 13, 2019. (AP Photo)

WASHINGTON — Some might say it was the event of the century when for the first time in over one hundred years, the United States Congress moved to impeach a president back in 1973.

During that time tens of millions of Americans tuned in to watch the Senate Watergate hearings. Variety labeled the spectacle "the hottest daytime soap opera," as David Crary of the Associated Press points out.

President Nixon would later resign the office on August 9, of 1974

As the Associated Press points out in their report, it was estimated that over 80% of Americans tuned in to some part of the Watergate telecasts back in the early 70s, a number that Gallup puts at around 71 percent.

This time the stakes are still high, but Americans in the U.S. and around the world can now watch on multiple screens and stream inquiry hearings online from multiple sources. How this will influence public opinion in favor or against impeachment only time will tell.

The impeachment inquiry of President Donald Trump has entered its public phase and will go live Wednesday in front of the world. Social media platforms will provide a running public dialogue alongside the multiple broadcast sources and consumption devices that were a thing of imagination during Nixon's era.

This public inquiry which will continue to analyze the White House's Ukraine scandal and the phone call that allegedly contained a quid pro quo demand, will be the first in an era of social media and two-screen media consumption. Many will be viewing proceedings on one screen while reading real-time comments and posts on platforms like Twitter, Instagram and Facebook.

During coverage of the Watergate hearings in 1973, ABC, NBC, PBS and CBS rotated between the networks to broadcast daily coverage, as well as prime time replays of the proceedings that led to the eventual resignation of President Nixon. Gallup estimates that 250 hours of televised hearings were broadcast live.