UPDATE: President Trump will travel to Florida on Monday 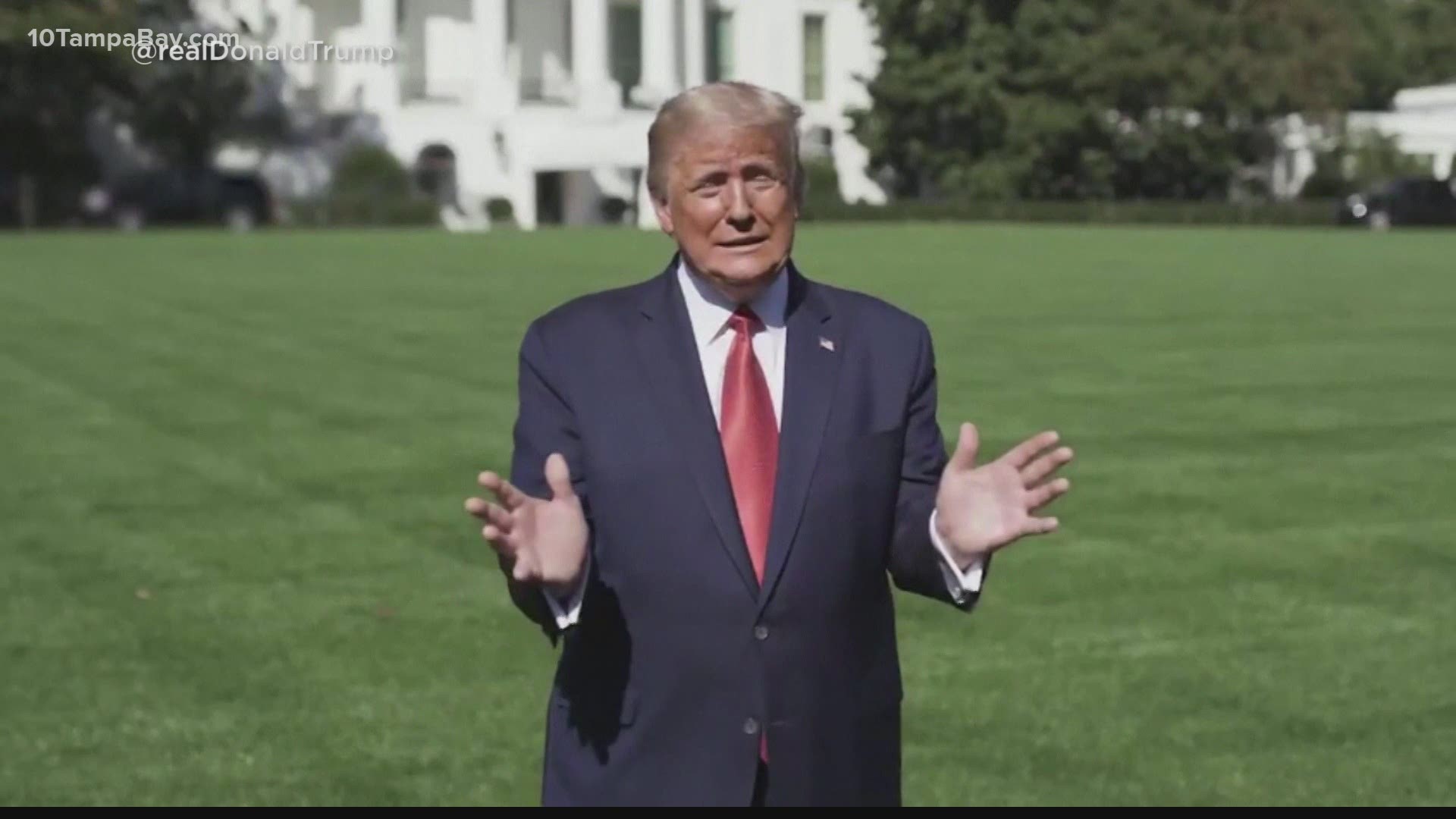 ST. PETERSBURG, Fla — After announcing his plans to hold a rally in Florida this weekend, it appears President Donald Trump, who is still recovering from COVID-19, will not be heading to the sunshine state this weekend. But, he's planning to come to Florida next week.

The president's reelection campaign said President Trump will deliver remarks at a "Make America Great Again" event at 7 p.m. Monday in Sanford, Florida. The event will be held at Orlando Sanford International Airport.

Bloomberg is reporting the president will remain at the White House this weekend and won't travel until Monday, citing "people familiar with the matter." That marks a 180-degree shift from what he told Fox News' Sean Hannity Thursday night.

"I think I am going to try doing a rally Saturday night. If we have enough time to put it together, but we want to do a rally probably in Florida Saturday night," Trump said.

As mentioned, that rally will now happen Monday. President Trump was also originally looking to hold a campaign rally this weekend in Pennsylvania. It's unclear when that will happen.

Regardless of those campaign event schedules, it does appear the president is planning to hold his first in-person event since testing positive for the coronavirus sometime Saturday. That's expected to happen at the White House.

According to the Associated Press, two weeks after the Rose Garden event that is now considered a “superspreader,” Trump is planning to convene another large crowd outside the White House for an event on “law and order.” That’s despite the ongoing White House COVID-19 outbreak.

An official says Trump will address the group from a White House balcony. The official declined to say how many people had been invited.

President @realDonaldTrump is feeling great, saying he will try to do a rally on Saturday night if there is enough time to put it together! pic.twitter.com/LynErpKeuo

The president's push for rallies and events came just days after he was hospitalized for COVID-19 and hours after his doctor said he fully anticipates Trump can make a “safe return to public engagements” on Saturday following his coronavirus diagnosis.

But it has yet to be announced if the president has tested negative for coronavirus or if he is still contagious. The idea of a possible Florida rally was one that sparked concern for a local health expert.

"Some percentage of people in that crowd are going to be exposed to some people who are positive and some of those people are either going to get sick or be in a position to transmit COVID to others," Dr. Jay Wolfson with USF Public Health said.

"We still don't know much about the long-term risks of it. But we do know that a percentage of the people who acquire COVID will get a new disease for the rest of their lives, it's one of the oddities we have noticed from it."

With the President testing positive for COVID last week, talk of attending or hosting rallies goes against the CDC's guidelines as well.

"We still don't have a vaccine. We do not have a treatment that we know works. We know the president received a lot of different things that will help mitigate the side effects but we still do not have a routine treatment for COVID," Dr. Wolfson warned.

In the meantime, Vice President Mike Pence is traveling to Orlando on Saturday to start a bus tour targeting Latino voters. And his wife will visit Tampa on Monday.

As for Dr. Wolfson's best advice for those who choose to either of these events? It's the same as before, social distance and wear a mask.

Trump says he is expecting to take another COVID-19 test on Friday. That would be one week after he flew to Walter Reed National Military Medical Center for a three-day hospitalization for the coronavirus.