Biden up by 10, Gideon leads by 7 in new independent Maine poll

A new, independent poll of Maine voters shows statewide support for Democrats in the presidential, senate, and congressional races. 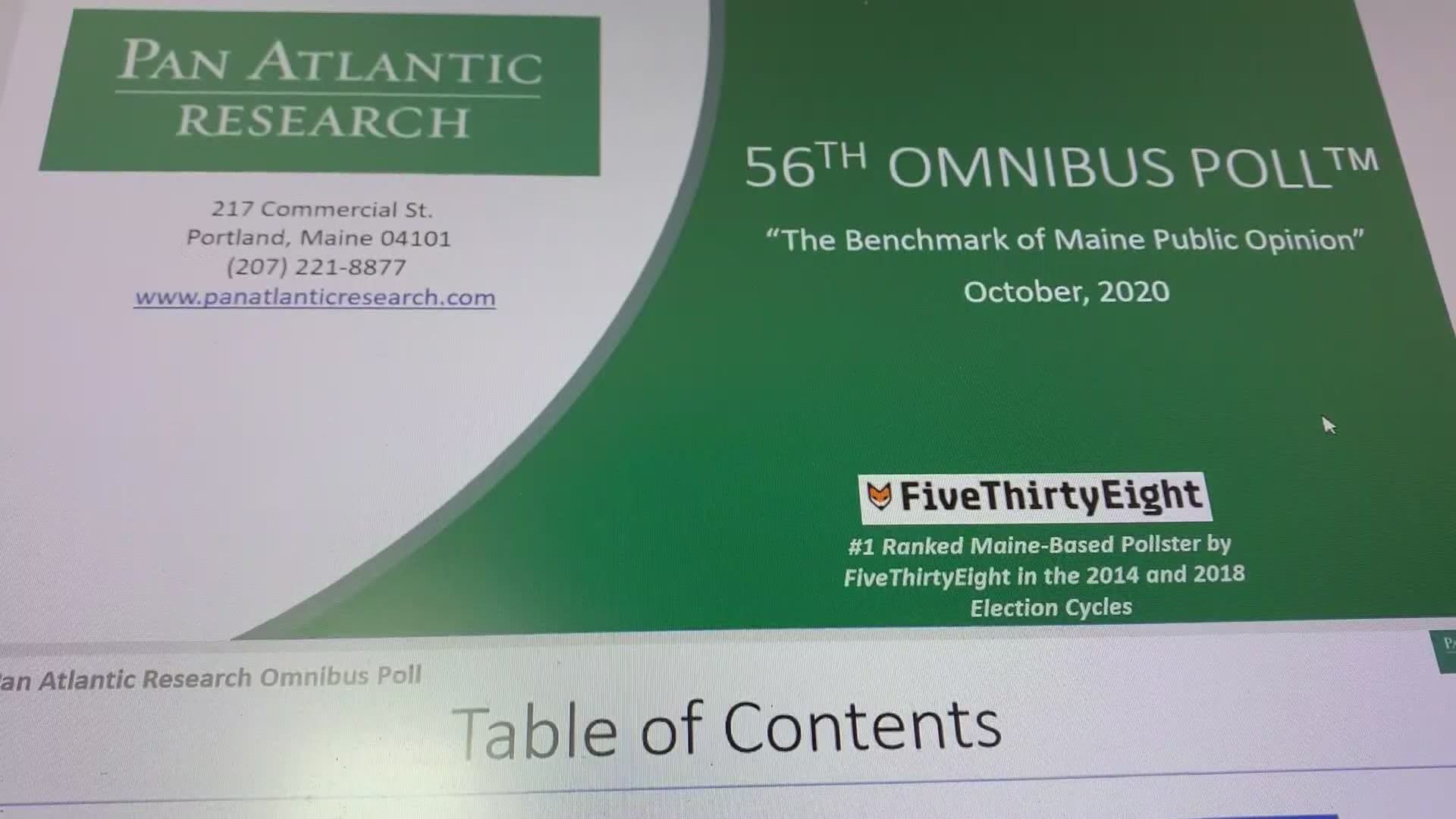 PORTLAND, Maine — A new, independent poll of Maine residents shows a statewide lead for Joe Biden in the race for president, and a wider lead than some other polls for Democrat Sara Gideon in the race for U.S. Senate.

The survey for Pan Atlantic Research of Portland, which has been polling Mainers for more than 30 years, was conducted between October 2 and October 6. It used a sample of 600 people considered likely voters and was done online.

Support for Biden was higher in the1st Congressional District (CD1), which typically leans more Democratic than the 2nd District (CD2), where the balance between the parties is much closer.

RELATED: Trump: ‘I should win the state of Maine’

President Trump can try and shift blame all he wants, but the fact is Maine's hardworking lobstermen and women are hurting under his watch.

They deserve better. And as President, I will work to protect the livelihood and safety of the fishing community. https://t.co/JuF1O2P3EH

RNC Spokesperson Andrew Mahaleris said, “If you believed every poll, Hillary Clinton would be sitting in the White House right now. Mainers know that President Trump has always delivered for them, and Maine will deliver for him in November."

“Throughout Trump’s entire presidency, Mainers have felt the consequences of having an unfit and unstable President who couldn’t care less about their jobs, their families, or their livelihoods. Joe Biden, on the other hand, has given a voice to Maine workers, a promise of stability for Maine families, and a plan to get the pandemic under control and guide our country through an economic recovery. We’re not taking a single vote for granted, which is why we’re reaching out to Mainers in every corner of the state, encouraging them to make their plans to vote, and making sure they turn out for the Biden-Harris ticket."

RELATED: Gideon casts ballot for Joe Biden in Freeport, slams Collins for not disclosing who she supports

In the fiercely-fought race for U.S. Senate, the Pan Atlantic poll shows Gideon leading Republican incumbent Susan Collins, with 46.9 percent for Gideon to 39.8 percent for Collins. Independents Lisa Savage (4.9 percent) and Max Linn (2 percent) are clearly not in a position to win but could certainly influence the final result through ranked-choice voting. Savage has told her supporters to rank Gideon second.

Of those surveyed, 6.4 percent indicated they were still undecided about the Senate race.

Several other recent polls have shown the margin between Gideon and Collins is closer than Pan Atlantic’s survey.

Annie Clark, Communications Director for the Collins campaign, says the poll "might as well be two years old."

"A two-week-old online poll—especially in this environment—might as well be two years old," Clark said. "That said—we think this is a very tight race."

Will Simons, Sara Gideon for Maine press secretary, said, “After 24 years in Washington, Senator Collins is putting special interests and partisan politics first, and now she's dodging questions about her support for Trump's re-election. In the Senate, Sara Gideon will always put the interests of Maine people first, and she will work with anyone to protect and expand access to health care, lower the cost of prescription drugs, and get big money out of politics, just like she has in Maine."

In the CD 1 race for Congress, Democrat Chellie Pingree holds a clear lead over GOP newcomer Jay Allen 54.5 percent to 34.8 percent, with more than 10 percent undecided.

In the higher-profile race for the CD 2 seat, first-term Democrat Jared Golden leads with 60.4 percent support over Republican Dale Crafts, who has 32.7 percent support in the poll; 6.8 percent indicated they are undecided.

Read the complete findings of the poll here: