Republicans are portraying California AG Xavier Becerra as unfit. But, Democrats are unfazed, accusing the GOP of playing politics despite the pandemic. 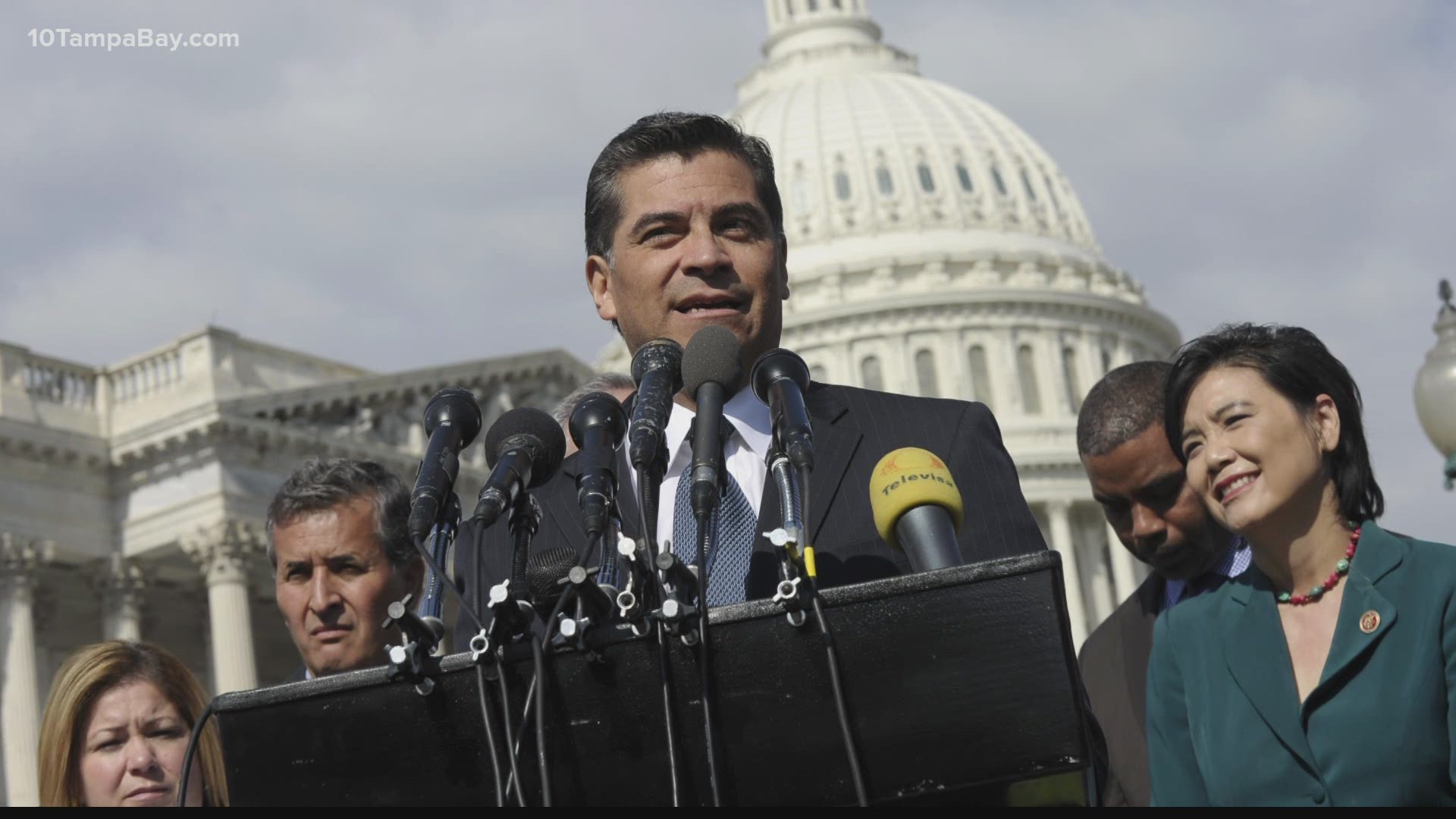 WASHINGTON — Health secretary nominee Xavier Becerra told senators Tuesday that confronting the coronavirus pandemic will be his first priority if confirmed, but he also pledged to expand health insurance, rein in prescription drug costs and reduce racial and ethnic disparities in medical care.

“To meet this moment, we need strong federal leadership," Becerra said at the first of two hearings on his nomination. “I understand the enormous challenges before us and our solemn responsibility to faithfully steward this agency that touches almost every aspect of our lives.”

Becerra now serves as California's attorney general and previously represented the Los Angeles area for more than 20 years in the U.S. House. A liberal politician-lawyer, he faces opposition from many GOP senators, who question his support for abortion rights and government-run health insurance, along with his lack of a clinical background. However, in the past 25 years, only one medical doctor has led the Department of Health and Human Services in a permanent capacity.

On health insurance, he pledged to work to expand the Obama-era Affordable Care Act, though in the past he's supported a government-run system like Sen. Bernie Sanders' “Medicare for All” idea. He said he would act to lower drug prices, particularly the cost of insulin. It's a goal that has bipartisan backing. Republican Sen. Mike Braun of Indiana noted that Becerra seems to have no drug industry support, adding, “I think I know why.”

Although leading Republicans are portraying Becerra as unfit, Democrats seem unfazed about his prospects, accusing the GOP of playing politics despite the urgency of dealing with the coronavirus pandemic.

Following Tuesday's appearance before the Health, Education, Labor and Pensions Committee, Becerra will be questioned Wednesday by the Finance Committee, which will vote on sending his nomination to the Senate floor. If confirmed, he'd be the first Latino to head HHS, a $1.4 trillion agency with a broad portfolio that includes health insurance programs, drug safety and approvals, advanced medical research and the welfare of children.

“I’m not sold yet,” Burr said at Tuesday's hearing, looking straight at the nominee. “I'm not sure that you have the necessary experience or skills to do this job at this moment.” Burr questioned whether Becerra respects the role of private companies in the health care system, particularly innovative pharmaceutical firms.

But other Republican senators sidestepped ideological confrontation and asked questions that centered on home state concerns. Sen. Tommy Tuberville, R-Ala., made a reference to “when” Becerra is confirmed, not “if.” And Sen. Lisa Murkowski, R-Alaska, said she would encourage him to visit her state early.

Becerra sought to soften his image as an enemy of drug companies. “We need the pharmaceutical industry in America to always feel like we’ve got their back to innovate,” he told Sen. Chris Murphy, D-Conn. “COVID is a perfect example of how we can come up with a vaccine, but we have to make sure that we’re getting our dollar's worth.”

Credit: AP
Xavier Becerra listens during a confirmation hearing to be Secretary of Health and Human Services before the Senate Health, Education, Labor and Pensions Committee, Tuesday, Feb. 23, 2021 on Capitol Hill in Washington. (Sarah Silbiger/Pool via AP)

And he also credited the Trump administration for its shepherding of two highly effective coronavirus vaccines. “There are a lot of people to thank, but without the work that the previous administration did, we would certainly not be here,” he told Braun.

Although Becerra, 63, is politically liberal, his style is low-key and oriented toward problem solving.

Still, Republican opposition has grown louder ahead of his nomination hearings. On Monday, Sens. John Kennedy of Louisiana and Tom Cotton of Arkansas released a letter in which they asked Biden to withdraw the nomination, calling Becerra “unfit for any position of public trust.” Senate Minority Leader Mitch McConnell, R-Ky., has called him “famously partisan.”

Opponents of abortion rights had signaled from the beginning that they would fight the nomination, and the political group Heritage Action for America launched a cable and digital ad campaign against Becerra.

Democrats are shrugging it off.

In many ways, Becerra was California’s early face of opposition to the Trump administration. He was appointed by Gov. Jerry Brown to replace Kamala Harris as state attorney general in early 2017.

Over four years, he filed 124 lawsuits, challenging the Trump administration on immigration, environmental and health care policies. His litigiousness and vocal resistance to Trump’s policies could allow Republicans to paint him as an overly partisan figure. California took pride in viewing itself as the resistance to Trump, and Becerra embodied that ethos.

Lack of medical experience doesn't disqualify a nominee for HHS secretary, though it can be a plus. Recent Senate-confirmed secretaries have included one doctor but also a pharmaceutical executive, a White House budget director and three governors.