Michigan has hosted both the major party candidates, President Donald Trump and Joe Biden, as well as others connected to their campaigns in recent weeks. 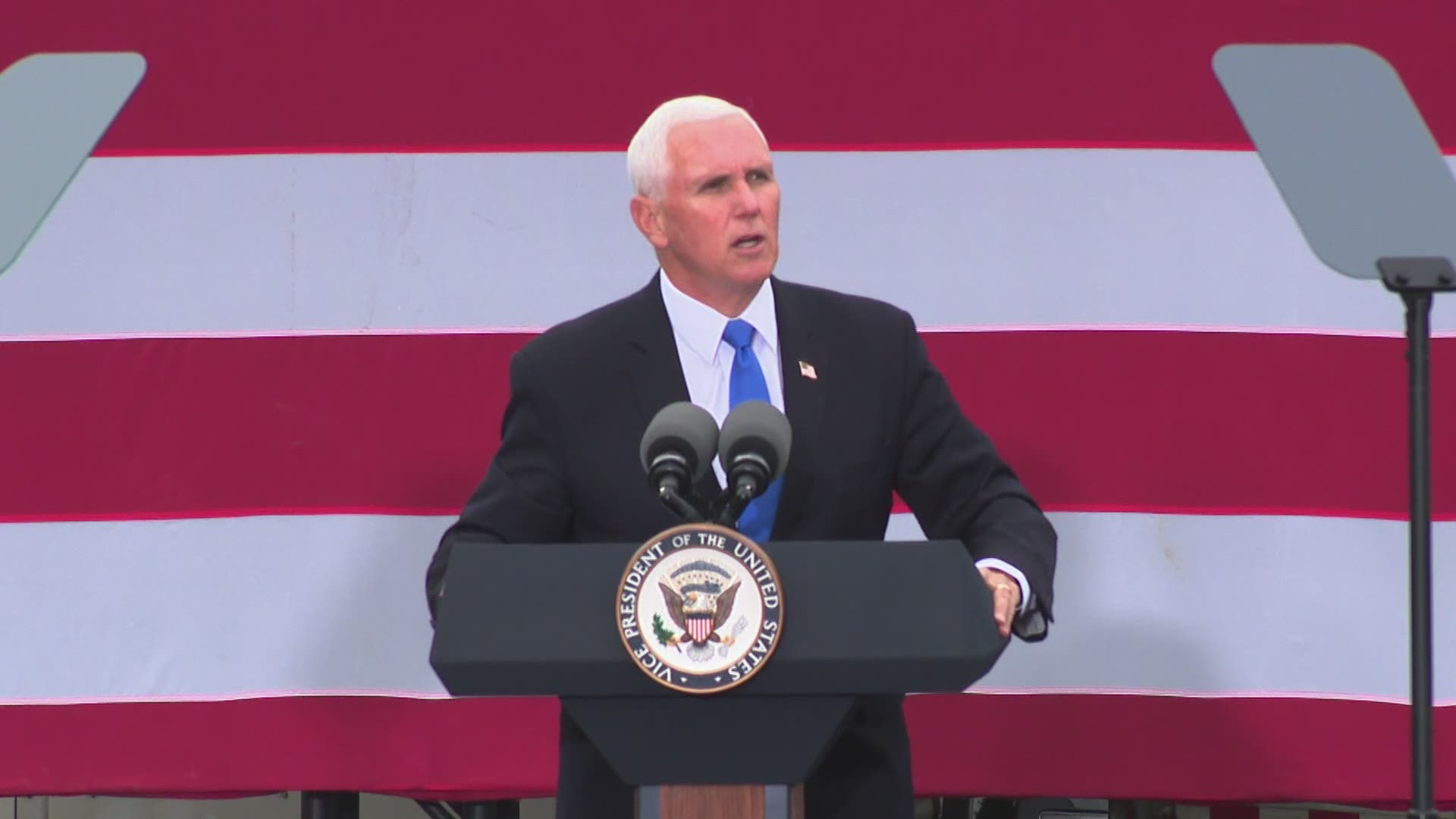 The outdoor rally was held in the parking lot of Lacks Industries off Kraft Avenue. Congressional candidate Peter Meijer stumped for the vice president, and sitting U.S. Rep. Bill Huizenga announced he was planning to attend the rally but tested positive for COVID-19 just prior to the event.

A swing state, Michigan has hosted both the major party candidates, President Donald Trump and Joe Biden, as well as others connected to their campaigns in recent weeks.

At the Wednesday afternoon rally, Pence focused on some of the Trump campaign's main platforms: the economy, support for law enforcement and healthcare. Because the vice president was speaking in Michigan, he discussed manufacturing jobs.

“The automotive industry is roaring back in Michigan,” said Pence, noting Fiat Chrysler’s plans to build a $1 billion plant in Warren and General Motors adding jobs in Michigan.

Under the Trump administration, automotive jobs in Michigan have dropped slightly from the time of his inauguration to February, shortly before the coronavirus pandemic. The Michigan Democratic Party tweeted a response to Pence's claims, saying "Mike Pence is in Grand Rapids bragging about a booming economy. Clearly, he’s out of touch with Michigan workers."

Dr. Linda Lee Tarver and advisor for Black Voices for Trump said the administration has helped lift businesses in the state.

Pence also used the stage to discuss another campaign point: the Supreme Court. Following the death of Ruth Bader Ginsburg, the Republican Party’s push for conservative justices gained new fervor. And the Trump campaign is using that to rally voters.

On Wednesday, Judge Amy Coney Barrett was in her third day of confirmation hearings to fill the seat left vacant by Ginsburg.

Republican candidate for MI-03 Peter Meijer opened for Mike Pence before the Vice President came out on stage. pic.twitter.com/eW6oKnSpLn

Pence also claimed that Joe Biden and Kamala Harris would pack the court with liberal justices, if elected. But on Monday, Biden told ABC-affiliate WKRC in Cincinnati that he’s “not a fan” of court packing.

For some of the people in the crowd, the Supreme Court nominations are motivators to vote for Trump and Pence.

“We certainly are excited that he is putting good Supreme Court justices in the Supreme Court so we're excited about that,” said Rhonda Beukema, from Hudsonville. “And we're definitely happy that they're both pro-life; that's very important to all of us. So those I think are the two big issues.”

For Beukema, she has never attended a campaign event for Trump—or anyone—before. But she thinks it’s important to “do (her) part” to get the president re-elected to a second term.

Pence also talked about health care, criticizing the Affordable Care Act in his speech. Just before the event, a plane flew over the area with a banner that said “Trump & Pence want to take your health care.”

Trump is holding a rally in Muskegon on Saturday, Oct. 17. The general election is on Nov. 3.